Hi, my name is Andrew Rich and I love finishing moves.

Seeing a wrestler hit his or her finisher evokes a strong excited response out of me because, well, it’s a finishing move and that’s what it is supposed to do. A finishing move is supposed to elicit a larger emotional response from the crowd than a regular move because of its special status. The crowd knows that a finisher: generally isn’t used more than once a match and will end the match nine times out of ten. I don’t need to go on and on, if you’re reading this you know how important a finishing move is.

I want to explore a variety of different moves performed by a variety of different wrestlers and, hopefully, have my love of the art of the finisher rub off on other people. There won’t be any in-depth statistics on how many matches that wrestler has won with their particular finisher. Analysis will be kept mainly as to why that finishing move works as a finishing move. For example, I can’t tell you how many matches Doug Williams has won with the Chaos Theory, but I can tell you that the backwards roll makes Williams’ opponent dizzier and gives Williams an extra amount of force and momentum when he snaps his opponent over his head into the German Suplex. I don’t claim to be a complete expert on professional wrestling holds and their intended effects, but as an experienced fan who has seen a lot of matches, I’ll do my best to explain the type of damage that a particular hold or strike does to the body using common sense and logic.

Two Beacons in a Sea of Mediocrity

Truth be told, there is not a lot I actually like about Bad Luck Fale. The Underboss of New Japan Pro Wrestling’s villainous Bullet Club stable, Fale is a BIG man — 6’4, 320 lbs., according to his Wikipedia page. He’s got a unique look, especially for the world of Japanese pro wrestling; there aren’t a lot of 6-foot-4, 320-pound Tongans running the ropes in Japan. Don’t get me wrong: in terms of the “big hulking bodyguard” role, Fale is perfect. The problem is that Fale is so large and thick that his mobility and move-set are quite limited. Yet despite his limited wrestling range, Fale’s presence deems him a monster amongst men, and as a result, New Japan Pro Wrestling bookers Gedo and Jado see fit to keep putting him in high profile matches against guys like Shinsuke Nakamura and Kazuchika Okada. Can they get a decent match out him? Sure, but there’s only so much that two of the world’s best wrestlers can do with him. Joe Lanza calls him “Bad Match Fale” and although I’m sure Fale is a nice enough guy, I tend to agree with Joe’s nickname.

That said, however, there are two aspects to Fale that I greatly enjoy. The first is his entrance music, if only for the first few seconds of it when a mysterious voice pronounces Fale’s nickname as “The Ahnderbouse” (rhymes with “yonder house”). I don’t why I like that, but I do.

Many Crosses to Bear

The crucifix powerbomb has made itself comfortable in pro wrestling for the past twenty years and in a few different variations. It first became popular in early 90s WWE WWF with Razor Ramon/Scott Hall. His version, the Razor’s Edge (later known as the Outsider’s Edge when Hall jumped to WCW), saw Hall drop to his knees to drive his opponent back and neck first into the mat, rather than throwing him. This version of the crucifix powerbomb is quite powerful because as Hall is dropping to his knees, his arms never leave his opponent, thus maintaining Hall’s driving force until the very end. The move made a brief comeback in the WWE a few years ago when Sheamus used a running version of the Razor’s Edge called the High Cross.

Another variation is the sitout crucifix powerbomb, also called the Black Tiger Bomb (named after New Japan junior heavyweight Black Tiger) and the Splash Mountain Powerbomb. Instead of throwing the opponent or dropping to his knees, the performing wrestler falls to a seated position, bringing his opponent with him. This version is particularly useful because it allows for an immediate pinfall, rather than wasting precious seconds scrambling for a cover.

To my knowledge, the only other major wrestler to use the throwing crucifix powerbomb would be Hernandez of TNA fame. I’m not ashamed to admit that back in the day I was a big Hernandez fan, and watching him launch guys half his size across the ring with the move he called the Border Toss (it’s a long story) gave me glee. Granted there were times when Hernandez got a bit… overzealous… and powerbombed a guy onto the back of his head a little too hard.

Before I go any further, I’d like to briefly talk about the name “Bad Luck Fall.” I like it. Not only is it a rather clever play on Fale’s name and less generic than, say, calling it the “Fale Bomb,” but it’s also a literal interpretation of what is about to happen to Fale’s opponents. You are going to fall. But this is no ordinary fall. This is a BAD LUCK fall. You’re gonna lose this match, that’s how much bad luck this fall is. And who knows, maybe your parents will get divorced, your roof will cave in, and the girl of your dreams will develop leprosy as a result of this throwing crucifix powerbomb.

Why does the Bad Luck Fall work as a finishing move? One reason has to do with Fale’s height. Like I said, Fale is a tall man. Standing at 6’4, Fale doesn’t sky over Nakamura and Okada but compare him to 5’11 Tetsuya Naito or the 5’7 Tomohiro Ishii? Fale is a walking eclipse.

That height advantage is key for the devastation of the Bad Luck Fall. When Fale lifts a guy up for the Bad Luck Fall, his opponent’s neck, back of the head, and shoulder blades are at a minimum of 6’4 inches off the ground. On paper that might not seem that high, but it is. My dresser is roughly 6 feet high and if I climbed on top of it and fell off, it would hurt like hell. So falling from a minimum of 6’4 inches after a brutal match with Fale would hurt quite a bit. Not only that, but when Fale is throwing a guy, he’s not just throwing them across the ring. He’s also throwing them slightly vertically as well, giving the opponent even more distance to fall to the mat.

Fale’s strength is another huge reason the Bad Luck Fall works for me. Wrestling him is like wrestling a refrigerator. With all that mass comes a significant amount of strength. And as it goes with most finishing moves, more strength equals more force equals more damage. As Fale releases his opponent from the crucifix position, he puts all his strength into the throw. The sheer force of the throw creates a powerful and painful impact when the opponent crashes into the mat.

One more notch in the Bad Luck Fall’s belt has to do with the move’s reputation and its effect on Fale. When Fale first started doing the Bad Luck Fall, it was established as an instant kill finisher. Fale would throw his opponent, they would land on the mat with a thud, the Fire Pro Wrestling CRITICAL sign would flash, the guy would go limp, and the referee would end the match in a KO victory for Fale. The effect is twofold. First, it makes the Bad Luck Fall seem like the threshold between possible victory and certain defeat. When an opponent faces Bad Luck Fale, they hold hope that they can beat him. But if Fale is able to hit the Bad Luck Fall, that’s it, party’s over. The line has been crossed and defeat is inevitable. They’re gonna get KO’d and sent to the back like the rest. This in turn makes Bad Luck Fale seem like even more of a monster than he already is because it gives other wrestlers something to fear and it gives the fans something to fear for their favorite wrestlers when they face them. Second, it gives Fale a massive ego boost. He knows that if he hits the Bad Luck Fall, he doesn’t have to worry about his opponents anymore. They’re not getting up. Hell, he doesn’t even have to cover them. This monstrous aura, combined with Fale’s ego, actually makes the fans more invested to watch him wrestle because they want to know if anyone can survive the Bad Luck Fall and take Fale down a peg. We eventually got to see this play out with Fale’s feud with Togi Makabe during the latter half of 2013, which ended at Wrestle Kingdom 8 in their King of Destroyer match. Makabe survived the Bad Luck Fall and managed to keep Fale down with his own King Kong Kneedrop finisher. Still, the Bad Luck Fall remains a devastating move as Fale has gotten plenty a win with it.

Lastly, I would like to compare the Bad Luck Fall to Bad Luck Fale’s other finishing move, the Grenade. The Grenade is a Chokeslam that transitions into a thumb thrust to Fale’s opponent’s throat while they are in mid-air. In other words, it’s a Chokeslam into Umaga’s Samoan Spike.

The combination of these two moves is a painful one, there’s no doubt about it. Getting a thumb rammed into your throat at a high velocity while you’re being slammed into the ground sounds like a rather unpleasant experience.

The Grenade may look a bit more unique than the Bad Luck Fall — a crucifix powerbomb is nothing new — but the Grenade’s intricacies is precisely what worries me about it. With the Grenade, Fale is lifting with only one arm. He’s a strong bastard, but with one arm he lacks the strength and control that he would have with two. Also, Fale’s thumb thrust requires expert precision every time he goes for it. An opponent’s throat is not that large of a strike zone. Combine that with the speed at which Fale is thrusting his thumb and it’s not a guarantee that the throat will be hit every time. Fale could hit his opponent’s upper chest or chin, which does not have the same effect even with the Chokeslam part of the move. The Bad Luck Fall, on the other hand, gives Fale plenty of time to set it up. It also gives him the strength and the control to hit the move as perfectly as possible. And with the added height, the Bad Luck Fall becomes that much more devastating than the Grenade.

I may not like Bad Luck Fale, but I love the Bad Luck Fall. It’s simple, effective, and makes sense for a guy of Fale’s size and strength to use. And of course there is the name. “Bad Luck Fall” would get an A in my book, even if it were only describing someone having a bad autumn.

Armories and Snowflakes: Enter the Dragon (Danielson vs. Aries) 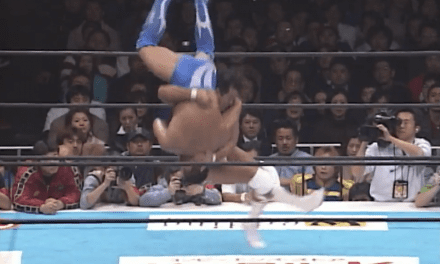