Stuck With Fale? The Parallels of Okada and Nakamura

Following a main event showdown with long-time rival Hiroshi Tanahashi on Japan’s biggest stage in front of a packed Tokyo Dome, Shinsuke Nakamura was on top of the world. Sure, he dropped the Intercontinental Title to Tanahashi at the Wrestle Kingdom 8 event, but it was a culmination of a long journey for Nakamura, back to the top of New Japan Pro Wrestling and into the conscious of casual wrestling fans across the world.

Could anything stop this momentum? How about Bullet Club’s certified muscle, Bad Luck Fale? After battling Tanahashi at February’s New Beginning in Hiroshima and April’s Invasion Attack, Nakamura began a mini-feud with two “members” of the famed Gracie family (Daniel and Rolles) before finally settling into a feud with the Bullet Club, specifically the biggest member of the Bullet Club, Bad Luck Fale.

In the end, Nakamura ended up getting the best out of Fale but it was ultimately a waste of time for the superstar. While Nakamura reset his year in August en route to the Wrestling Observer’s Wrestler of the Year award, from a creative standpoint, there was nothing more draining than seeing him caught up in singles and tag matches with the Bullet Club and Fale in particular.

If this sounds a little too familiar, you’re picking up on what I’m trying to get across.

Kazuchika Okada, like Nakamura, had a showdown at the beginning of 2015 with his long-time rival Hiroshi Tanahashi on Japan’s biggest stage in front of a packed Tokyo Dome. I don’t have to go through the whole spiel, you get it. Okada lost and his journey back to the top of New Japan begins now.

The problem isn’t that he has a journey back to the top, that is a great story and can lead to the wrestler becoming an even bigger star than they were when they first tasted the top when told well. The problem is who Okada’s first roadblock is: Bad Luck Fale and the timetable for Okada getting through this road block.

In his first match prior to the Wrestle Kingdom 9 war with Tanahashi, Okada fell to Bad Luck Fale and his Bad Luck Fall. The story made a lot of sense as Okada, clearly still reeling from his loss the night prior, had no answer for Fale. He simply didn’t have the strength or the power to pull out a victory, the man was still battered and bruised. Great story, we all said, now Okada can beat Fale at one of the two New Beginning shows and begin his ascension back to the top of New Japan.

New Japan released the cards to their two New Beginning shows (a business model they followed last year to great success), the first in Osaka on February 11 and the second taking place February 14 in Sendai. On that first show (Osaka), Okada will form an extremely odd team with Kazushi Sakuraba and Toru Yano to battle the Bullet Club team of Bad Luck Fale, Tama Tonga and Yujiro Takahashi — not exactly the Bullet Club standouts.

It’s cool though, that Osaka show is main evented by A.J. Styles and Tanahashi battling for the IWGP Heavyweight Title, Okada and Fale can main event the Sendai show, right…RIGHT?!

Well, no. Instead Okada teams with his little buddy that could YOSHI-HASHI against the team of Bad Luck Fale and Yujiro Takahashi. Instead, Yuji Nagata (win of the Wrestle Kingdom 9 pre-match Rumble) will take on Nakamura for the IWGP Intercontinental Title with Makabe and Ishii for the NEVER Openweight Title as the other marquee match.

Perhaps I should be a bit more patient, for all we know the plan is for Okada to run through the New Japan Cup, perhaps facing Bad Luck Fale in the finals (like Nakamura did last year), win and move on. The problem is, Nakamura didn’t simply move on, he got stuck with Fale for months on end. The two had some memorable matches against one another but it ultimately felt like a waste of a supereme talent in Nakamura and that’s my huge issue here.

I love the story of Okada starting from the bottom and working his way back up. I even like the storyline of him running into a bulldozer in Bad Luck Fale and losing to him on the wrong night. Hell, you even have a legit car accident (Okada busted up his Corvette) to play into the “bad luck” storyline. The problem for me is how long is one of the top stars of New Japan, a 26-year-old phenom, going to be stuck with one of the worst regulars on the roster.

In the Voices of Wrestling NJPW 2014 Yearbook, Josh Engleman created a metric to rate wrestlers called ISHII: the ISHII metric took into account expected star rating, actual star rating, match length, etc. to give us one number to rate a worker’s worth in 2014. Bad Luck Fale’s 2.56 ISHII ranked him 12th worst among NJPW competitors with over 10 matches. The only guys worse than Fale? Taichi, Gedo, Sho Tanaka, TAKA Michinoku, Alex Koslov, La Sombra, Kazushi Sakuraba, YOSHI-HASHI, Takashi Iizuka, Tiger Mask IV, Tama Tonga, Toru Yano and Manabu Nakanishi — not exactly a murderer’s row. That Nakamura was still able to rank third (3.75), despite 22% of his non-tournament (G1 Climax & New Japan Cup) matches coming against Fale, is a testament to his ability.

Using Cagematch.net’s user rating system, we see some of Nakamura’s lowest points since 2011 came against Bad Luck Fale. In full, Nakamura averaged a 6.08 Cagematch rating in singles match against Fale. His non-Fale rating since 2011 is 7.33, a huge difference in how fan’s enjoy Nakamura’s work.

I understand the appeal of Bad Luck Fale to NJPW bookers Gedo and Jado, I really do. He’s a big, beefy powerhouse and one of the true big man threats in New Japan. It also helps that he’s aligned with the gaijin heel group (Bullet Club). Just because I understand it, doesn’t mean I have to like it. Nakamura still won Wrestler of the Year despite months wasted on Fale and while Okada could obviously follow the same path is it one we really want to go down again?

I’m hoping Okada does away with Fale at March’s New Japan Cup and moves onto smaller and better things for the rest of 2015. I can’t help but still have a part of me that worries Nakamura’s summer of 2014 will become that much more relatable for Okada. 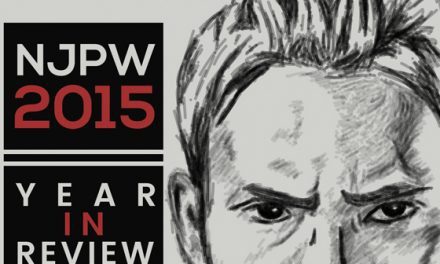