When Dave Meltzer sent out these series of tweets, I could not believe what I was reading:

The best one hour pro wrestling TV show I ever saw was a 1986 episode of World Wide Wrestling with a Flair vs. Windham match.

It is now a very distant second. The 3rd episode of New Japan on AXS is like nothing I've ever seen before.

Story telling, announcing, post-match, how it led to the next step, I defy anyone to not connect with that show.

Here, in January 2015, on a cable network with limited exposure, was the best hour of televised wrestling ever? Let’s put that tweet into perspective, shall we? Memphis, Mid-South and UWF, Portland, Crockett NWA — Meltzer has watched it all and for him to write something like this…well, the skeptic in me tried to make an appearance. I already knew the Kazuchika Okada vs. Hiroshi Tanahashi match from 2013 Invasion Attack was a five-star classic. It won both the Wrestling Observer’s and VOW Match of the Year polls. It was the English commentary that had me questioning the claims of “greatest”. It had been great so far in the previous two shows but come on… the BEST OF ALL TIME?

The show opened with Okada in studio catching everyone up on his battle to regain the IWGP championship from Hiroshi Tanahashi. Once again, these short videos are absolutely perfect and tie together previous shows. Just Okada, a camera and a microphone:

“Compared to the previous IWGP, I could feel that the fans were tired of the Tanahashi era and desperate for a change, so I thought, ‘Watch me do it.’ I lost in January and in February so I knew it would take time to take on that challenge.  My opportunity came the next season, which was the New Japan Cup. If I won, nobody would complain and I could take on the challenge. I think winning the belt helped, too.

Tanahashi has a pattern when he goes for the knees. I could tell from his eyes and from where he was looking so that wasn’t a problem. It’s not a countermeasure but I had in my mind how to prevent from getting hit.”

Just like in the first hour, Mauro Ranallo opens the show providing some history on the venue (Ryogoku Kokugikan), the fact that Okada earned this title match by winning the New Japan Cup and stressed the fact that this was the forth match (to date) between the two. Ranallo is becoming a master at setting the table.

“In the very first episode of New Japan Pro Wrestling here on AXSTV, Kazuchika Okada went in search for gold, but it didn’t pan out. This match marks the fourth meeting between Okada and Tanahashi in the last fourteen months. Ladies and Gentleman, this is Steamboat/Flair and Austin/Rock rolled into one.”

As the bell rings, you can hear it in Ranallo’s voice that he is truly excited to call the match. Remember, Mauro and Josh are sitting in a studio in late 2014 or early 2015. This match is from 2013. They are not ringside. It feels organic and that is what makes it special.  Hell, I am excited and I’ve seen this match at least four times.

Ranallo’s energy and pace moved with the match. When Okada moved the action to the outside and went to hit a Tombstone piledriver, Ranallo’s tone went from concern to almost disappointment that Okada would try to take out Tanahashi and heel it up.

As the match builds so does Ranallo and Barnett’s call. This could easily drift into forced excitement but Ranallo’s play-by-play was amazing. The sequence of Tanahashi hitting a cross body splash, a Slingblade, and then a Dragon Suplex had me out of my sofa.  After another High Fly Flow, Ranallo delivers a plea to Okada to throw in the towel helping to drive home the punishment Okada is receiving. Just brilliant.

“Live to see another day, Okada! He is a young wrestler. He is going to have more opportunities. There is not much more he can take.”

Here is where the audio mix really shined. The crowd is going bat-shit crazy and the first shot back from break is of that jacked-up crowd. The noise from the arena seems a little more up front in the mix and that helps the viewer get back into the groove. Ranallo goes for broke as we head to the finish. I want what he is having.

“Okada…Rainmaker! Oh, a block by Tanahashi…and Tanahashi with a tombstone…Nooo, Okada able to reverse it…TOMBSTONE PILEDRIVER! HE NAILS IT! What is he doing? He should be going for the cover. He wants to end it with the Rainmaker!”

Meanwhile, Okada is in the ring celebrating with Gedo taking the mic.

“Kazuchika, The Rainmaker, has made a complete comeback! History has just been changed. The new IWGP Champion will take us to a place where no pro wrestler has ever been. We’ll take the challenge from previous champion Tanahashi, anytime. We’ll show him a different level any day. Before that, there is an opponent the Rainmaker must pay back. Let’s hear from the boss of Suzuki Army.”

This brings out Suzuki and Ranallo puts him over like the bad-ass he is. Minoru has something to say.

“ I saw the match from there, just now. Indeed, the history of New Japan Pro Wrestling has changed. However, the wrestling industry has always been and will be about me. The money rain that you boast about…it’s fake money, isn’t it? The history of pro wrestling hasn’t changed at all. I’ll tell you why…because you are weaker than me. How dare you call yourself an invader? You’re not an invader. It’s I, Minoru Suzuki!”

Two hard slaps later from Suzuki and we have ourselves a new challenger for the IWGP title. Cameras catch up with Suzuki backstage and he came across as a legit killer.

“You have no right to talk about history when you’re weaker than me. What the hell is an invader? Huh? I’ll tear your head off. I’ll crush it with my hands. Hey, Okada. Don’t be full of yourself when you’re so weak. Bring it on.“

The show cuts to Okada in his post match presser…

“Being intimidated by the Suzuki Army who acts so arrogantly is never a good feeling. I have to show Suzuki that we are on a “different level” and I have to teach him that the wrestling industry has changed.”

…and then back to Okada in a closing studio interview.

“More damage was done to my right elbow at the Tanahashi match than I had expected. If I were able to prevent that damage, I would have won that match sooner. I was able to see how good Tanahashi is. I thought,’Well, good job Tanahashi’, but towards the end I couldn’t hear the crowd cheering. It was like fighting in a soundless stage. The moment I won, I felt my arm hurting. Then Gedo came and I was relieved. Winning the IWGP title again was going to happen sooner or later. When I first won, the crowd didn’t seem to enjoy it. This time the fans in Ryogoku gave me a warm reception. It finally felt like the fans started to understand. I’d wrestle Tanahashi however many times, but I think he already knows that there is no way he can beat me.”

So was this the greatest hour of televised pro wrestling ever? Was a five-star MOTY made better by the team of Ranallo and Barnett? For me, it was the best pro wrestling television show I have seen in years and honestly I cannot think off a show that beats it. I’ve watched the match before so I knew going in many of the “hope” spots and near falls but I still got chills listening to the English call. The studio interviews were outstanding. The audio mix was tremendous. The energy was off the charts. As a fan of professional wrestling, the broadcast was a dream come true. This is how you’d always want professional wrestling to be presented and it is something that you could show family members or friends and be proud to watch. You don’t have to be embarrassed any more.

Five Stars. I’d give more if I had them. You must watch this broadcast. 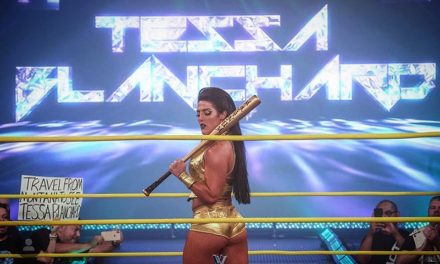 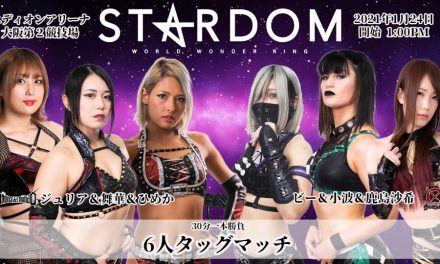