1. Cortez Castro & Cisco (w/Bael) vs Pimpinela Escarlata & Mascarita Sagrada: Cisco snatched the microphone from ring announcer (and future Mrs. Joe Lanza) Melissa Santos to declare “That’s Mr. Cisco.” This was followed by some very loud and very obvious post production boos. Pimpinela was the face in peril, which had me hyped for the Mascarita Sagrada hot tag. He didn’t disappoint, with flying headscissors for everyone, and a nice tope suicida onto Bael on the floor. Pimpinela’s big spot was a flying cross body off the top rope to the floor onto all three gang members. Back inside the ring, Cisco made a blind tag, and caught Sagrada with a Codebreaker (hey, that’s what Striker called it) for the win. Big Ryck, who watched the match from ringside, hit the ring for a promo. He was doing some generic trash talk until his gang jumped him from behind and put the boots to him. I genuinely didn’t see that coming. The exclamation point to the angle was Cisco rubbing a cigar into Ryck’s eye, which was accompanied by a very loud and very goofy sizzling sound. Wacky sound effects aside, this was a cool angle, helped by the fact that there had been no foreshadowing or hints that this was coming. Castro, Cisco, & Bael had been the least interesting characters in the promotion to this point, so maybe this will give them some juice. ** for the match, ***1/2 star angle.

We come back from commercial in Dario Cueto’s office, where Cueto is paying off the gang for taking out Ryck. A Ryck face turn makes sense, because with Cage now in the picture, Cage, Mil Muertes, and Ryck would have meant three monster heels, which is a bit redundant.

I should note that Striker mentioned Ryck being taken away to a “local medical facility.” That’s WWE speak, clearly beaten into Striker’s brain from years of doing WWE commentary. If you notice, they never use the word “hospital” on WWE television.

Next was a sit down interview with Cage and Vampiro. Vamp asks Cage (close your ears for this, Jim Ross) how he feels about having heat with the boys in the back. Cage responds that he doesn’t give a shit (bleeped out, but that’s what he said), and that his only concern is the 20 lbs of gold. Vamp was all like “dude, you’ve been here for one week, you’ve got some ego on you kid”. Cage didn’t like that, and asked Vamp if he’d like to step back in the ring. Vamp backed down without looking like a coward, which was tricky, but he pulled it off. Vamp ended things by calling Cage a future champ. They’re clearly building towards a Cage vs Prince Puma title match.

2. Super Fly vs Pentagon Jr – Pentagon Jr, who is legit my new favorite wrestler, won this with a package piledriver. To me Super Fly got too much offense here, as this was obviously meant as a showcase for Pentagon, who was also given promo time, cutting a post match promo calling out Chavo Guerrero Jr (Chavo double crossed Pentagon by nailing him with a chair a few weeks ago in a ten man match, after a few weeks of the two having an uneasy alliance). Pentagon Jr finally got a chance to show off some of his brutally stiff offense here, including his awesome overhand chops that you can feel through the TV, and Vampiro put him over strong in the commentary as a killer with no remorse. That’s exactly how he comes off, both here in Lucha Underground and especially in Mexico, where his stiff brawling style has made him a cult favorite and reminds me of a young LA Park. If he ever gets a major push in any of the places he works, he’s a guy with the potential to give off that Katsuyori Shibata/Brock Lesnar/Minoru Suzuki type vibe of a real element of danger. **

3. Sexy Star vs El Mariachi Loco – Striker gave the El Mariachi Loco back story again, which is that Cueto found him bussing tables at the local Mexican restaurant down the street from The Temple. He now walks around ringside and collects tips from the fans as part of the gimmick. Striker compared Sexy Star to some of the great women’s wrestlers of the past, specifically naming Trish Stratus and Fabulous Moolah, among others. Vampiro said she was better than those women. This was fast paced and crisp, and probably the best work to this point in the show, with Sexy Star picking up the win. Guys like Mariachi Loco and Super Fly have now been firmly established as jobbers to the stars, a slight notch above Famous B and Ricky Mandel, who are the full on jobbers of the promotion. **1/2

4. Last Luchadore Standing – King Cuerno vs Drago – They keep ripping off WWE match stipulations, which would probably come off really low rent if the action wasn’t so great. This is the proverbial hottest feud in the territory, with the two men tied at 1-1-1 coming into this one. Drago did a flip dive over the top rope within the first 30 seconds of the match, which gave us our first count. This show is all action, which is what really sets it apart from other wrestling shows and makes it such a fun & easy hour of TV to consume. This was worked as a series of high impact spots one after another leading to Marty Alias counts, with no attempt at all to work a traditional match. This strategy worked, as is not only fits the “no filler” tone of the promotion, but also fits the story of the feud and the styles of the wrestlers involved. Cuerno of course managed to squeeze in his Arrow from Hell, which is the best looking tope suicida in the business. This led to Cuerno setting up Drago on a table on the floor, a strategy that both Striker & Vampiro noted backfired on Cuerno the week before. Drago rose up off the table, but Cuerno ended up hitting him with the Thrill of the Hunt off of the apron and through the table. This was the first believable tease of a full 10-count. Cuerno won it moments later by tying a rope around Drago’s neck and yanking him against the turnbuckle, which prevented Drago from rising to his feet. Creative finish, but not the most definitive blow off, so I think this feud will continue. ***

This was a come down episode from the two tremendous weeks we were treated to after the holiday break. What this week lacked in match quality, it did make up for in story line advancement, with Ryck’s babyface turn, Cage’s motivations explained, Pentagon Jr finally being given a focus, and the next chapter of the great Cuerno/Drago war. Lucha Underground continues to solidify its position as the best wrestling show in North America. 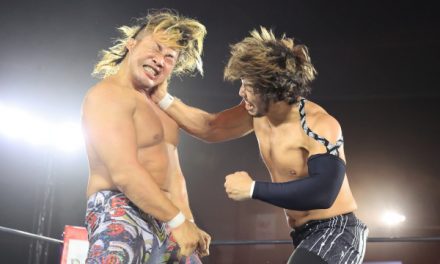