Another night where lucha meets puro is upon us! The second of the two iPPVs is going down tonight and headlining is La Sombra and Mascara Dorada, two great high flyers. We’ll also see Rey Cometa face off against Cavernario Barbaro in a rematch from their great 81st Anniversary show match as well as Mistico taking on Polvora, at least I hope so as it looked like he injured his leg again last night. Who knows, maybe he should come out wrestling in a plastic bubble at this point. Anyway, some great high spots are bound to happen here tonight so let’s get to the card!

They opened with the same video as last night, complete with horrible comic sans font. I guess in Japan they haven’t gotten the memo yet that it is pretty much the worst font imaginable to use in ANY situation. It’s just so ugly and tacky!

KUSHIDA & Tiger Mask & Jushin Liger & Stuka Jr. vs. Gedo & Yoshi-Hashi & OKUMURA & Tomohiro Ishii: The usual six-man opener stuff with everyone pairing off. OKUMURA’s valet (also his wife) got involved during a square-off between him and Liger and she ended up getting a backbreaker for her troubles. Tiger Mask is worked on for a while before Liger comes in and starts palm striking everyone. Stuka does his huge torpedo crossbody to a prone OKUMURA to the floor. KUSHIDA follows suit with a huge tope somersault to the floor. Stuka takes care of OKUMURA and his valet, who both get struck with torpedo splashes. Stuka covers OKUMURA and that’s it. **1/2

Captain New Japan & Triton vs. Tetsuya Naito & Ryusuke Taguchi: I guess Triton didn’t get the memo that he should never team with Captain New Japan if he wants to, you know, win. The latter team were wearing their masks from last night, including Ryusuke Taguchi dressing up like a pharaoh, because I guess that’s wacky. CNJ rips off the pharaoh mask after some goofy spots involving the mask, but Taguchi reveals he has another one under that mask. CNJ is worked on until Triton comes in with some hot lucha, including an awesome step up springboard moonsault to Taguchi on the outside. CNJ gets caught with an STO then submits to Naito’s submission finish. **1/4

Stigma & Angel de Oro vs. Mephisto & Yujiro Takahashi. Yujiro got the heat on Oro for a while, but he came back with some great high spots. Eventually, though, he’s isolated. Stigma comes in briefly but he’s taken down too. Huge tope senton by Stigma. Oro dropkicks Mephisto to the floor and hits the Sasuke special. Always awesome to see one executed perfectly. Oro looked so amazing in this match, and it’s not because of that one move.  Oro went for a springboard but Yujiro takes him down to the floor. Stigma goes to the top rope but Mephisto catches him and hits the devil’s wings from the top rope for the pinfall. It was really a one person match. Oro’s performance really stood out, Stigma looked fine and the other two were just there. **½

Rey Cometa vs. Barbaro Cavernario. Cometa immediately starts off with a huge tope suicida that sends Cavernario to the crowd. They get back in the ring and Barbaro undoes the turnbuckle. Cometa and Cavernario exchange offense with Cometa getting the better of it after a Canadian destroyer. Cometa goes for the apron for a springboard but Barbaro dropkicks him to the floor. Cavernario went for a buckle bomb but Cometa turned it into a pinning hurricanrana for a nearfall. Buckle bomb into the exposed turnbuckle. Barbaro goes to the top rope but Cometa comes off with a springboard C4 to the mat, then follows THAT with a sky twister press to the floor. So many spectacular moves coming all at once, I can’t even comprehend it. Cometa misses a baseball slide and Cavernario responds by sending him to the floor and launches off with a big splash from the top rope. 450 splash by Cometa doesn’t get it. Barbaro then grabs him from behind and submits him with what appeared to be a kneeling surfboard-like submission (he calls it La Cavernaria). Just a complete spectacle of a match from start to finish that’s easily the best match of the tour thus far. ****

Mistico vs. Polvora: Polvora jumps him as he makes his way to the ring and beats him up, including injuring his leg with a chair, perhaps playing into a legit injury that happened last night. Polvora works on him for a bit until Mistico comes back and launches with a somersault tope. Polvora comes back with a backbreaker and tries to get people into doing “ole” chants. Approximately one loud person chanted it. Mistico comes back with a jumping hurricanrana off mat to the floor. He tries for a crossbody, but Polvora counters with a tilt-a-whirl slam. He tries to go for something else, but Mistico counters and submits him with the la mistica armbar. Mistico did one or two moves fine but other than that, this was nothing to talk about. **

Hiroshi Tanahashi & Kota Ibushi & Volador Jr. & Atlantis vs. Kazuchika Okada & Shinsuke Nakamura & Ultimo Guerrero & Gran Guerrero. Okada and Volador started, then Ultimo Guerrero and Ibushi. Ultimo Guerrero and Volador were wearing their masks for whatever reason. Guerrero gets his pulled off and goes wild but gets dumped to the floor. Hiroshi Tanahashi and Gran Guerrero follow. The heels all jumped the babyfaces, including everyone doing the vibrating leg bit on both Atlantis and Tanahashi. Faces come back with some high spots including Ibushi with a huge missile dropkick. He follows that with a double dropsault on both Ultimo Guerrero and Nakamura then follows with a huge moonsault. Everyone does a big high spot to the floor which allows Atlantis to submit Gran Guerrero with the torture rack. This was some good fun, everyone got to do some cool stuff and it was very enjoyable. ***¼

Mascara Dorada vs. La Sombra: Sombra came out wearing a skull mask and a white suit, looking very dapper in appearance. He took it off to wrestle, though, so a Low Ki performance this is not. Word broke out here during the match on Twitter that Mascara Dorada has signed a one year deal with New Japan, so he’s here to stay. As for the match, mostly just back and forth to start. Sombra hit a springboard dropkick that sent Dorada reeling on the outside, then a while later Dorada tightrope walks and hits a huge moonsault to the floor. Dorada is in control until he misses a moonsault. Sombra goads on Yuji Nagata, who has been sitting at ringside, and even gets up at one point but eventually sits down again. Sombra leaps off with a big moonsault to the floor but Dorada comes back with a hurricanrana. As Sombra is on the apron, Dorada leaps off the mat unassisted and hurricanranas  Sombra off the apron to the floor. THAT was impressive. Dorada goes to the top rope, but Sombra leaps off and hits a reverse hurricanrana. Scary. Split legged moonsault attempt, but he doesn’t get it. Dorada goes for a flip, lands on his feet, only for Sombra to take him out and plants him with the one armed powerbomb for the pinfall. There were some really cool spots here, but the Cometa/Cavernario match set the standard for the night and they couldn’t follow it completely. ***¼

After the match Sombra cut a promo, shaking Dorada’s hand while also mentioning Yuji Nagata, so it looks like they’re doing a match between the two somewhere down the line. It was also announced that Dorada had signed a one-year deal with NJPW. Everyone comes out to celebrate and pose for photos as the show concludes.

Another pretty fun card. The main event was really fun and Cometa/Cavernario was the big highlight of the card. Even though most New Japan cards are pretty good, it was a nice reprieve to see new faces interact with the familiar ones, in this case the CMLL crew arriving to New Japan. Not everything is a blow away match, but it brings eyes on new wrestlers and gets new eyes on a promotion that could probably use some as there’s a wealth of talent involved here. Good stuff! 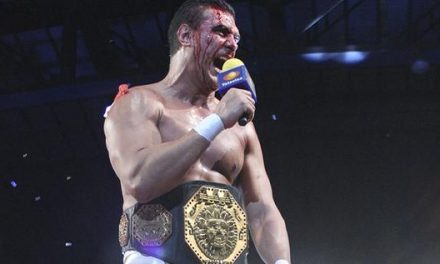 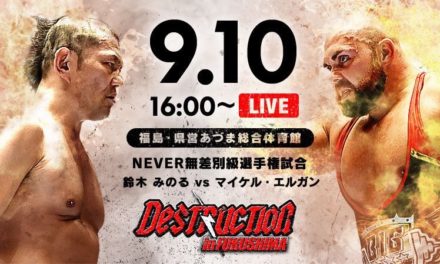