This week, NXT makes its Wednesday debut on the WWE Network, giving Thursday back to WWE SmackDown on SyFy. The day change isn’t a huge deal, as I don’t think I’m alone in watching the majority of NXT on-demand whether the night of the first-run episode or the day after (as I just did). I’d hate for NXT to get lost on Thursdays as more people focus on SmackDown (for some reason) so regardless of the day they move to, I’m glad they are on their own. This Wednesday debut was built as a major show with a proper go-home show last week. This isn’t a 2-hour NXT special but the card looks every bit as good, let’s get to it.

We’re off and running as Tyson Kidd, complete with what appears to be a brand-new cat ring jacket battles Finn Balor (sans paint – sorry Wreddit).

Tyson Kidd vs. Finn Balor: More than almost any other recent NXT debut, Finn is presented as an absolute star: the music, the entrance, the lighting, his look… everything about him screams STAR. What hasn’t has been his in-ring performance. It’s been good but not great, let’s hope this gets him on the right path.

Balor starts quick (literally the first second after the bell) with a dropkick and starts taking it to Tyson with a flurry of high-flying offense. Kidd escapes to the outside and drives Balor into the guardrails. Kidd takes control soon after but luckily doesn’t fall into his usual trap of headlocks. He’s working offense on Balor without needing to stall — kicks, tree of woe, arm locks, suplexes. And guess what, it’s getting over huge as the fans rally behind Balor and actually want to see him make a comeback.

Balor regains control with a Pele kick, a Tanahashi-esque Slingblade and a beautiful Taguchi-style tope (that’s a joke, by the way, please don’t comment and tell me I’m an idiot). Kidd mounts a bit of a comeback with a huge kick from the apron and a Sharpshooter in the middle of the ring. Balor fights it off and eventually gets to the ropes which prompts a “This is Awesome” chant from the NXT crowd. This is pretty awesome so far. Underhook DDT by Balor, double foot stomp from the top and it’s over — Balor wins!

This was a lot of fun and easily the best Balor has ever looked. Kidd was great here and had me and everyone watching convinced he was going to win. There’s not much more you can ask for in an opener: well-paced action, some high-spots, good heel/face dynamic and some teases along the way. Great way to open a big show for NXT. ***

After the match, we get another recap video from the Zayn/Neville NXT: [R] Evolution main event. I love how NXT continues to show this, explain how big of a deal it was and make it seem important. You know this was a pivotal moment in the company because they are treating it as such. It’s an easy and effective way to fill TV time and it gets these guys over. Keep doing this NXT. Better yet: we get a rematch tonight, hooray!

Bull Dempsey backstage with the lovely Devin Taylor who says Baron Corbin isn’t the only undefeated man in NXT and we should expect to see Corbin on his back looking up at the “Last of the Dying Breed.”

Bull Dempsey vs. Baron Corbin: This was nothing but an all-out brawl but two guys who seemingly haven’t had a match go beyond a minute. It showed here, especially with Corbin who was a bit sloppy and struggled selling. Dempsey actually looked pretty solid here but he ate an End of Days and lost. This wasn’t a squash by any means but there’s clearly one guy on the upward slope and the other is Bull Dempsey. **

Becky Lynch & Sash Banks vs. Charlotte & Natalya: Renee Young mentions that Lynch & Banks are also known as Team BAE (Best at Everything), I cringe when I hear anyone say or type “Bae” so I will never use it. Sorry guys! Dueling “Let’s go Becky!” “Let’s go Nattie!” chants. Renee mentions that Becky and Natalya once tagged together in Japan nine years ago. Thankfully, Renee Young is more trustworthy than Hulk Hogan and that is indeed correct! Per Cagematch.net, November 9, 2005 Nattie Neidhart teamed with Nikita and Rebecca Knox (Becky Lynch) to battle the formidable team of Asian Cougar, Rey Extreme and the always dangerous ??? in the IW*GP (International Women’s * Grand Prix) promotion. Extra credit for Renee, who has improved overall as an announcer. She’s doing less of the “OOOOH!” “WOOOAH!”s that plagued her early run and is falling into way more of a color commentator role.

Natalya worked underneath most of this match as Sasha and Becky cut off the ring. Nattie eventually gets the hot tag, which wasn’t very hot at all even though the crowd was hyped for Natalya to get there — weird. Neckbreaker with a little handful of tights and Sasha Banks pinned Charlotte! Good little tag match here. **½

NXT Championship – Sami Zayn © vs. Adrian Neville: Match begins with a slower pace as both men feel one another out. The story in the early part was each guy knowing the others moves and either dodging, escaping or reversing anything the other tried. Back from commercial we get a series of near falls that don’t have much intrigue because there’s no wayZayn loses the title here. For me personally that hurt the match in this early portion despite the two absolutely working their ass off. The last half of the match ramped up quickly as Neville countered a bridging suplex and hit an incredible hurricanrana. Seriously, this was one of the quickest hurricanrana I’ve ever seen… kudos to both men for making that look great. Zayn hints that he’s completely knocked out/concussed. They show a replay of the move and he landed right on the back of his head. Quickly though Zayn snaps into action and hints at a Helluva Kick but Neville darts to the outside. Zayn goes for the diving DDT through the ropes but Neville hits him with a kick. Neville with a rollthrough on another Helluva Kick attempt but Zayn gets out at 2.9. Helluva Kick by Zayn and it’s finally over!

This had absolutely no chance to live up to their match at [R] Evolution but this was one of the better NXT weekly TV matches I’ve seen. Remember how I always talked about Neville being disappointing as a champion? Well, a few matches with Sami Zayn and I’m not saying that anymore. Like many others, Zayn brings out the best in guys and really doesn’t get his due as an all-time great worker. This was an awesome match that really picked up at the end and capped off a fantastic episode of NXT. ****

Post-match, Kevin Owens attacks Zayn from behind continuing the theory that Sami Zayn can never have joy in his life, not with Steen/Owens alive. Owens, still showing signs of the cut on his nose from [R] Evolution, slowly walks back up the ramp as we fade to black.

One of the best episodes of NXT I’ve ever seen. From top-to-bottom, a perfectly paced hour of wrestling. This has the match quality of an NXT special and if you’ve watched those, you know that’s high praise. Go watch this now. 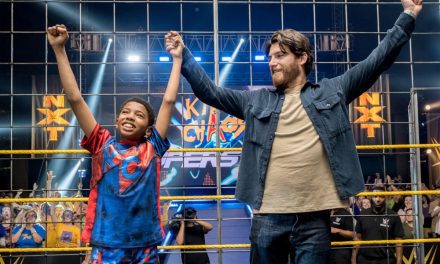 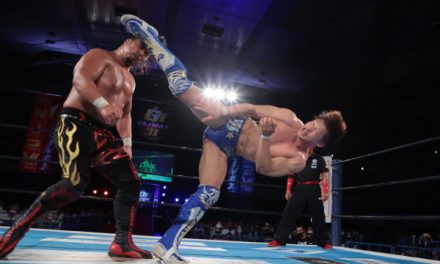