We’re going back in time, all the way to 2014 and episode #298, to kick off our triple bonus coverage of WWE Superstars. Let’s skip the lengthy prelude and get right to the C-show action!

1. Titus O’Neil vs. Justin Gabriel – This episode is so old that the RAW set is still littered with faux Christmas gifts. No cool guy indoor sunglasses for Gabriel, which means he’s a babyface this week even though he’s wearing his Cobra Kai skeleton gear. Between the delayed airings of NXT where he was most recently a heel, his constant face/heel flip flopping on Superstars episodes that I never manage to watch (or review) in a timely manner and apparently being part of the gang that chases Daniel Russo around the valley, I’m always confused and never have any idea whether to vote this guy Most Popular or Most Hated on my Pro Wrestling Illustrated year end ballot. My main man Titus, who I am anointing the Superstars MVP of 2014 because nobody else cares enough to dispute my claim, finishes up the year in style with a somewhat surprising squash victory, the likes of which has me worried for Gabriel’s future. If he does get released, he should have an easier time finding work than Cobra Kai stable mate William Zabka, who ended up fighting for straight to DVD scraps once he was too old to pull off his trademark high school bully roles. *1/2

2. Cesaro vs. Erick Rowan – I heard good things about this match from my pal, fellow Superstars aficionado and dirtsheet avenger Rovert, so I was hyped for this. This was post-brass ring, pre-Tyson Kidd era Cesaro, so I wasn’t surprised that the commentary here focused almost exclusively on Rowan and his genius IQ. Rowan dominated early with power moves, until a Cesaro lariat takes our vintner over the top rope to the floor, which leads us to commercial. When we come back, Cesaro works the big man into a giant swing and transitions into a half crab. Clearly Cesaro is watching his Yohei Komatsu tapes. Rowan makes the ropes, and uses a nice pump handle slam and big splash for a near fall. Cesaro scores near falls with a German suplex and a reverse springboard European uppercut (!!). Rowan picks up the win with a spin kick that missed so badly that even switching to an awkward TV angle couldn’t hide it, followed by a full nelson slam. This was the best singles match I’ve ever seen out of Rowan. Add this one to the ol’ “Rovert was right” folder. ***

Just as I was about to hit the old back button on my Roku remote and skip over to episode #299, they ran an Ascension vignette which froze me in my tracks because Viktor was screaming about debuting “next week”. Surely I’m not going to be treated to some Ascension action on Superstars 299, am I?

1. Erick Rowan vs. Tyson Kidd – Back to back Rowan, this time facing Cesaro’s tag team partner Tyson Kidd. Tom Phillips calls Rowan “the enigma”. Kidd is wearing a Cesaro “King of Swing” t-shirt, and Renee Young (who is improving in the booth) informs us that Tyson has dedicated this match to his wife Natalya. Moments after Tom Phillips puts Rowan over as a genius, Kidd fools him with the old “heel rolls out of the ring and gets the face to chase him until he rolls back in and kicks him in the face” routine. I’m probably asking too much, but they probably shouldn’t work spots like that with a guy doing a genius gimmick. This was a short match with Kidd mostly playing keep away, but Rowan made short work of him once he caught him, finishing Kidd off with the full nelson slam. Not as good as the Cesaro match, as this was all about Kidd who worked his ass off and bounced around like a pinball for the big man. *3/4

Holy crap, they actually had the balls to show the AWFUL AWFUL AWFUL Seth Rollins vs Roman Reigns match from RAW. This was so horrendously bad, and is my (very) early front runner for worst match of 2015. This was basically a 20-minute reverse chin lock spot disguised as a match, with absolutely zero heat, and it ended in a cheap DQ when Kane yanked Reigns out of the ring as Reigns was setting up the Superman punch during his heatless comeback. I can’t believe they exposed this to the masses twice. I would have burned the tape.

2. Faaaaahndaaaaaahngooo vs. R-Truth – It seems like a million years ago that Fandango was getting a big push, before the concussions happened. Maybe he can slowly gain back the confidence of the company like Dolph Ziggler did, but he has no momentum to speak of at the moment with his slightly repackaged dancing man act. Rosa adds nothing, and continues to be the most useless person on the WWE payroll. R-Truth kept shouting WHOOMP THERE IT IS, and for some reason the fans were reacting to it. At least he was repping Tag Team, as opposed to the similarly titled but second rate 95 South version WHOOT There It Is. Either way, Fandango scored an easy win with the top rope legdrop, which one could easily say is the Whoot There It Is second rate version of the Bobby Eaton Alabama Jam. I’m not liking this trend of Superstars squash matches. *

No Ascension match. That vignette was deceptive!

1. Titus O’Neil vs. Jack Swagger – This was a rematch from a legitimately awesome match from Main Event. It was also billed as such, which is pretty cool, because I’ll take any little storyline touches that I can get on this show. Phillips & Young acknowledge that this is episode #300. They exchange pie faces to start, and IT’S ON. Titus is doing some quality clobberin’, before slipping into the requisite WWE heel reverse chin lock (only the second such spot in this series of episodes, to be fair). Luckily this didn’t last long. They tease a transition spot, but Titus lands a big boot to keep control. More clobberin’ from Titus, nothing fancy (which is fine, because Titus is not a fancy man), just some clubs to the back and stiff forearms. Titus charges for a corner splash, but Swagger gets the knees up. Swagger slides out of the ring and swings Titus’s leg around the steel post. Back inside, Titus tries a Clash of the Titus but Swagger escapes and takes out the gimpy leg. Swagger slaps on the ankle lock, and Titus is forced to tap. Short, but they managed to work in some good psychology with the small amount of time they had. Titus is back to looking pretty good after that uninspired NXT run. Let’s just pretend that never happened. **1/2

2. Los Matadores vs Goldust & Stardust – We get an outside the ring spot, so that cues a commercial. I note this because Phillips says “Los Matadores in control, as this tag team match rolls on!”. “Rolls on” must be one of those things they teach everybody to say, because all of the announcers say it right before the commercial breaks. When we come back, the Dust Brothers are working over Diego (or is it Fernando?), and I don’t think Phillips knows which one it is either, because he keeps saying “Goldust in control against Los Matadores”. Whoever it is (I think it’s Diego), he does a nice job as the face in peril, until Torito does a run in to distract Stardust leading to the hot tag. While Fernando is cleaning house, Diego is still selling like a mad man on the apron. Nice touch. The Matadores are solid workers. Fernando ducks and Stardust accidentally Disaster Kicks Goldust, and Fernando rolls up the stunned Stardust for the upset win. Basic tag bout here, but I really enjoyed the work of the Matadores, particularly Diego’s selling. **1/4 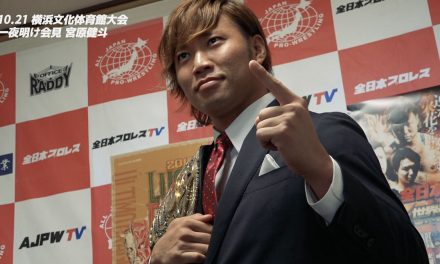 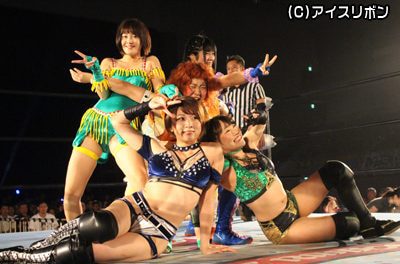