Lucha Underground returned from a two week hiatus with a very excited Dario Cueto standing in the ring, explaining the rules of Aztec Warfare:

Essentially Aztec Warfare is a Royal Rumble-style match with New Japan Rambo style eliminations (minus the over-the-top rope variety), with no disqualifications. In addition, despite winning one of two battle royals three weeks ago, Fenix was forced into the #1 entry position due to losing his subsequent singles match to Mil Muertes (who also had won his own battle royal). Muertes was awarded the #20 spot for winning that match.

Got all that? Probably not. Here is all you need to know — the winner of this mess gets the belt.

One match, one hour, one giant wall of text to describe how it all went down (Editor’s Note: For your eye’s sake I broke up said wall) Here is the worst review I will ever write:

AZTEC WARFARE: Fenix was dubbed by Cueto “unlucky number one”, and Cueto then announced that by “random draw” (wink wink), Johnny Mundo was entry number two. Cueto’s sleazy prick character blows away every heel authority figure ever with the possible exception of Mr. McMahon. The next man in was Mr. Cisco, who was also the first man eliminated, by Mundo via The End of the World. Cisco didn’t even last until the next entry, which was King Cuerno. Cuerno cleaned house and did a fantastic suicide dive on Mundo. The lack of over the top eliminations was clearly designed to allow for crazy dives and outside the ring brawling. Son of Havok was next in. He cleared the deck with a wacky dive, which left him alone with Pimpinela Escarlata, who was number six. Number seven was Prince Puma, who went right after Mundo. Everybody hung out outside the ring while Puma and Mundo went at it. The mysterious Asian woman was scouting everybody again from the bleachers. Ivelisse came in like a house of fire, hit a spin kick on Pimpinella, set him (err, her? I don’t know the P.C. rules…let’s stick with “him”) up for a SoH top rope dive, and Pimpinella was the second person out. Drago was next in, followed by Bael. Cuerno eliminated Ivelisse seconds before Bael entered. Prince Puma eliminated SoH with a move that looked a lot like Ricochet’s Benadryller. What a hack.

Cortez Castro entered next. He immediately saved his pal Bael from Mundo. Aww. BFF’s! Striker pointed out that Fenix & Mundo were still alive despite entering the match number one and two. Ricky Mandel was the next entry. Puma eliminated Bael with a standing shooting star, and Castro was eliminated by Mundo. That finished off all three members of The Crew, just as Big Ryck was entering the match. He immediately eliminated Mandel, and helped Cuerno eliminate Drago. Mudno snuck up on Cuerno and pinned him with a crucifix. 14th man in was Pentagon Jr. Pentagon was killing everybody in sight, as he usually does. Super Fly was next up, followed by Chavo Guerrero. Chavo was the smartest guy in the match, because it was no DQ, and he showed up with a chair. He immediately knocked out Super Fly with the chair and pinned him, then did the same to Pentagon Jr. Mascarita Sagrada was next. If I had been watching this live, I would have been really annoyed at the non stop commercials, which were being squeezed in about every third entry or so. Sexy Star was next, and went right after Chavo. Big Ryck absolutely murdered Sagrada with a lariat to knock the little fella out of the match. El Mariachi Loco entered. In case you missed his back story, he is a bus boy who Cueto supposedly found while eating lunch at a Mexican restaurant down the street from The Temple, and subsequently hired to fight, since the fans were complaining about a lack of authentic Mexican talent. It’s so absurd that it’s awesome. Muertes, the final entry, was next. He quickly eliminated Loco with a big punch and a flatliner.

This led to the big hoss showdown of Muertes and Big Ryck. Just as they came to blows, everybody attacked both of them. We were down to seven at this point, with Muertes, Ryck, Mundo, Fenix, Puma, Chavo, and Sexy Star. Puma used a standing shooting star on Ryck, but Chavo threw him out of the ring to try to steal the pin. That made no sense. Who cares who scores the eliminations until the final two? Fenix then did a 450 on Chavo as he tried to pin Ryck, and stole the pin for himself. Chavo rolled out of the ring, came back with his chair, leveled Fenix with it, and pinned him. Chavo draped the chair over Sexy Star’s face and climbed to the top, but Blue Demon Jr returned to make the save and help Sexy Star eliminate him. So we were down to four: Sexy Star, Prince Puma, Johnny Mundo, and Mil Muertes. Of course, another commercial. I could’t imagine watching this match without a DVR.

Our three heroes decide to triple team the monster Muertes. It didn’t work. Muertes eliminated Sexy Star with a spear. Muertes offense looks legitimately dangerous. Puma took down Mundo with a Zig Zag, which Striker called as such. Puma & Mundo used a double superplex on Muertes. Catrina hopped up on the apron. Puma went after her. Muertes came over to protect his woman, Mundo came off the top with a kick, Muertes ducked, and Mundo took out Catrina. That looked great. Puma used a Meteora on Muertes, followed by a springboard 450 by Mundo, and a top rope 450 by Puma to eliminate Muertes. This left Prince Puma and Johnny Mundo, who killed it in the main event of the first ever episode of Lucha Underground, to battle it out for the title. First near fall was a Spanish Fly from the top rope by Puma. Moments later Puma kicked out of The End of the World. This was worked like a hot final three or four minutes of a long main event match. Puma hit the 630 and won the match and the title. ***1/2

Great match that blew away the New Japan Rambo from a few days earlier. Puma and Mundo hugged it out, and Konnan (slowly) made his way to the ring (with the help of his cane) to congratulate his protege. No sign of Cueto during any of this, as the credits rolled with Puma celebrating with the title. 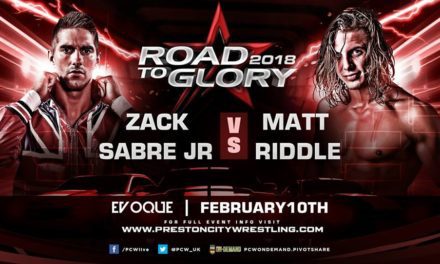