The two best soap operas on television returned Sunday night. One, loosely based on real events, is a dramatic look at the power brokering, family conflict, romance and tragedy in which the royalty of a small sovereign nation find themselves wrapped up as history unfolds around them.

The other is “Downton Abbey.”

The inspired-by-reality emotional roller coaster about which we are concerned is not the continuing saga of the Crawleys of Grantham; it is the revenue-generating thorn in the WWE’s side, “Total Divas,” the E! Network contemporary classic that almost certainly has scriptwriters for the wrestling promotion crying themselves to sleep as they try to puzzle out how to execute the company’s on-again, off-again attempts to force the square peg of the reality show’s plot into the round holes of wrestling storylines.

The comparisons between “Total Divas” and “Downton Abbey” are even easier to make after Sunday night, when part two of the third season of “Divas” added its own British twist: Paige. The once and again and former and future Divas champion dove headfirst into the drama in her “Total Divas” debut, dragging Natalya to a party (featuring cameos from an unshaven Fandango and cape-less Bad News Barrett, strangely identified by his Christian name despite the fact that most superstars appear on “Total Divas” under their professional identities) at which there is “a motley crew of misfits,” Nattie says. “And I’m not talking about the band.”

Nattie, uncomfortable in the social setting, rushes straight for a brownie.

If you can’t see where this is going, you’re bad at television.

Paige gleefully hints to Nattie that there’s something special and “happy” about the pastry she’s enjoying, but good-girl Nattie doesn’t get the joke.

Cue hysteria. Nattie flushes the rest of the brownie (and may have actually made herself sick as well; it’s implied later in the episode) and commences freaking out for the rest of the show, Googling “smoking marijuana symptoms” the next morning on the treadmill and actually driving her car into a dumpster (with Ariane/Cameron in the passenger seat) to try to get out of a workplace drug test because she doesn’t want WWE to think she’s a “drug addict.”

Later, Paige shows up at Nattie’s place bearing a sackful of cat toys and nasal spray to cushion her apology: JK, that was a regular (pot-free) brownie. Guess how funny Nattie thinks that is?

Meanwhile, John Cena and Nikki Bella are back in their kitchen, where we left them at the end of part one of the season a couple of months ago, and where they are in the process of a trademark John Cena Rehearsed Speech. John is fresh from a breakfast meeting with the rest of the Bella family, who have convinced him he’s robbing Nikki of any possibility for happiness because she’s decided she’s OK not getting married and never having kids as long as she can be with him. John tells Nikki they need to take some time apart.

“Can I never win in this relationship? Can I never, ever win?” Nikki asks. Because apparently she is new here.

For her part, twin sister Brie Bella-Branielson can’t understand why John didn’t mention that he was basically dumping Nikki because her family asked him to, and she confronts him about it at work.

“I’m really, really, like, blown away. It says a lot about John that he did not throw myself and my family under the bus,” Brie says, newfound respect for her ersatz brother-in-law hanging around her like a full set of “You Can’t See Me” sweatbands.

Later, at a restaurant with the family (sans Nikki), Brie expresses some empathy for John while Bryan Daniel Bryan crams nachos in his face to keep from getting involved in what erupts into a patented Bella family bicker session.

“This s—t has to stop,” Mama Bella finally says. “One secret leads to another secret, and that’s not what our family is about.”

That’s right — their family is about drinking wine and yelling at one another.

And because these are the Bellas and this is “Total Divas” and Cenella relationship dramz is the show’s bread and butter (seriously, if John and Nikki ever do actually get married, they’ll have to cancel the show), Brie and Mama Bella decide they need to tell Nikki about their meddling, a confrontation that ends in lots of shouting in the street, Nikki taking off in a hired SUV, and just about everyone’s middle finger getting blocked out at some point, including Brie flipping double birds to brother JJ while lying on the living room floor, where she has gone to lie down because she is so tired of yelling. (For people whose actual jobs involve repeatedly throwing other human beings through the air, the cast members on “Total Divas” all seem to be really easily exhausted by arguing.)

At work, Nikki tells Brie she doesn’t want to have anything to do with her, which is kind of both awkward and convenient because this is all coming down around SummerSlam, which, of course, is where Nikki sells out her sister in a high-profile but weirdly executed and unsurprising heel turn. And then Nikki runs back to the palace in Tampa she shares with the Face of the Company and they make up and drink wine.

Also on “Total Divas” this week: Yet another A+ Titus O’Neill cameo (involving the phrase “sexual chocolate” and Titus ordering one of the Divas to never touch him again), a handful of Emma run-ins (she may not have joined the cast, but she and Paige are real-life BFFs, so expect to see her again this season), a lot of talk about Bryan “Daniel Bryan” Danielson wearing compression pants, and a merciful lack of Eva Marie. 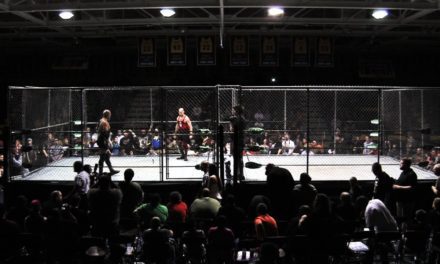