Finally got caught up, so here’s a quick recap of the Christmas Week audio.

Talk n’ Shop (12/20/14): More goofiness from Doc and Karl, who are joined by AJ Styles. AJ’s imitation of Ric Flair is something else, so much so that I’m surprised it was never busted out in TNA. THUMBS UP

MLW Radio (12/21/14): Part 2 of the Christmas show, as they’re joined by Alberto Del Rio, Juventud Guerrera, and Teddy Hart. It’s another fun if slight show and Teddy remains an amazing listen in short doses. THUMBS UP

Piper’s Pit (12/22/14): Jeff Jarrett joins the show to talk about Global Force Wrestling and the NJPW Dome show and basically says nothing. Piper is on another planet during this show, saying that TNA was broken up due to heat between Hogan and Hall, Nash, and Syxx (?) and I’m pretty sure he called it “Global Coast Wrestling” at one point. Jarrett has been on multiple podcasts the past few weeks, so listen to him on Ross’ show or Wrestling Observer Radio instead of this. THUMBS DOWN

Who’s Next With Goldberg (12/23/14): Chris Jacobs, who is a human who hosts a car show on TLC, is the guest. They talk cars and football. Jacobs refers to Johnny Manziel as “Johnny Badminton.” BURN NOTICE. This showed up as episode #30 when it’s actually episode #31, so it may not have downloaded properly for many people. I don’t think anyone noticed. THUMBS DOWN

Steve Austin Show (12/23/14): Ivan Koloff joins Steve to talk about his wrestling career, beating Bruno for the WWF title, doing time for cattle rustling, and overcoming his demons. It’s a pretty good listen but Austin has trouble getting Ivan on track at points. I liked the more thorough Titans of Wrestling interview with Ivan, so make sure you check that out. THUMBS IN THE MIDDLE

Talk is Jericho (12/24/14): Dee Snider joins Jericho to discuss his new Christmas musical, as well as his days in Twisted Sister and that group’s rise and spectacular fall. Dee has seen the business from all sides and this is an enjoyable show. Santa also joins Jericho for a segment that isn’t great but much better than the usual fare. THUMBS UP

The Ross Report (12/24/14): Vader is the guest this week for a lengthy interview. They cover a lot of ground, from the NFL to breaking in to Japan to working in WCW and the WWF. Vader has a high opinion of himself, but it’s earned and he comes across as earnest and honest in this interview.

Art of Wrestling (12/25/14): CM Punk and Cliff Compton join Colt to wish everyone a Merry X-Mas, then Mick Foley (naturally) is the guest for Christmas Day. There is some Santa talk, of course, but Mick also gets into his time as a WWF jobber, his death match days in Japan, and Beyond the Mat, which are topics that haven’t been overdone. Mick is always a great talker so this is a thoroughly enjoyable listen. THUMBS UP & BEST OF THE WEEK

Steve Austin – Unleashed (12/25/14): Steve talks to Jim Ross about the upcoming NJPW Dome Show and the current state of wrestling. Steve then takes calls from listeners, all of whom are comically disgruntled with the WWE, which gets pretty funny after a while. But again, we don’t need to hear you plug your podcast or tell the world what you’re nickname is. THUMBS IN THE MIDDLE

THE JIM CORNETTE EXPERIENCE (12/25/14): Something different, as they basically do a podcast version of a clip show, with snippets from conversations with Jim Ross, Lance Storm, and the infamous “meat scam” story with Kenny Bolin. I’m not going to grade it, but if you’ve heard the shows you don’t need to listen to this again, and if you’ve never heard Jim’s show it’s not a bad way to get acquainted with it.

Talk is Jericho (12/26/14): Jericho goes the live route and broadcasts one of his one man shows from Leicester Hall in London. Lots of stories from visiting Vince McMahon’s mansion to working the Rock in Japan to Dancing with the Stars. Most of the tales will be familiar to you if you’ve read Jericho’s books, but he’s an engaging storyteller and I didn’t mind hearing them again. THUMBS UP 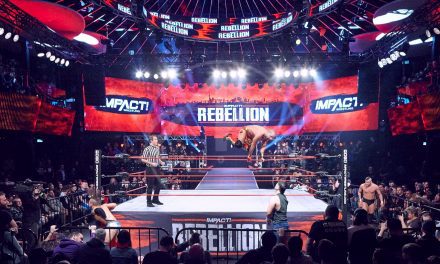 Good is Not Good Enough: State of IMPACT Wrestling Heading Into AXS