That’s no typo in that title folks, as Superstars episode #296 was a Best of/Slammy special, so this is indeed a TRIPLE BONUS REVIEW, even though we’re four weeks removed from our last look at the least watched show in the WWE Universe. Aside from Slammy shenanigans, #296 also featured highlights from “the top four” WWE matches on 2014. Here are the four matches they chose, along with my thoughts on how I believe they’ll do in the Voices of Wrestling 2014 Match of the Year Poll:

Randy Orton (c) vs Batista vs Daniel Bryan – WWE World Heavyweight Championship – WrestleMania XXX –  I’m in the minority on this one. In my opinion this is not only one of the most overrated matches of 2014, but of all time. More of an extended angle than an actual match, it was the culmination of a long and deliberate (?) “Daniel Bryan overcoming The Authority” storyline. The overdone WWE trope of the babyface popping up off of the stretcher loses me every time, and when you take away the emotion of the story, bell to bell it’s a very mediocre match. It’s no threat to win the VOW poll, but I’m positive it’ll show up on ballots. It’ll probably finish somewhere in the 50-75 range.

Evolution vs The Shield – Extreme Rules – Another match I didn’t like as much as others did, but unlike the Mania match where I’m baffled as to why people think it was great, I totally get why people loved this one. I liked it just fine, but it didn’t grab me the way it grabbed others. I expect it to do well in the VOW poll, with a potential top 25 finish.

John Cena vs Bray Wyatt – Last Man Standing – Payback – Finally, a match Joe Lanza deems worthy of MOTY consideration. Interestingly, this match may have set the trend of Bray Wyatt being booked in gimmick matches. Aside from the great match vs Daniel Bryan at Royal Rumble, does Bray Wyatt have a straight singles match that is anything above mediocre in his entire career? You almost get the idea that the company feels like they need to hide him in garbage matches. This is another match that could top off in the top 25 range in the VOW poll.

Team Cena vs Team Authority – Survivor Series – This was a perfectly good match, a very good match even, super fun with an all time memorable finish. This won’t even sniff the worldwide all inclusive VOW poll, nor should it, and I’d be surprised if it even showed up on more than two or three ballots.

As far as the VOW MOTY goes, the highest ranking WWE matches this year will probably come from NXT. As for “pure” WWE branded matches, I think Daniel Bryan vs Triple H from WrestleMania will likely finish the highest, with the Cena/Lesnar squash from SummerSlam as the dark horse.

Anyway, on to Superstars.

1. Jack Swagger vs REAL MAN Curtis Axel – While Renee Young was marking out over Sting showing up “this past Sunday at Survivor Series”, I was marking out over my new favorite gimmick, REAL MAN Curtis Axel. I’m hoping they go full asshole/misogynist with this gimmick, which will annoy the whiny social justice bully types to no end, but we’re about a month and a half into the gimmick’s life and it hasn’t graduated beyond the C-shows yet. Chances are it’ll never be as edgy or offensive as it needs to anyway, because this company rarely goes all the way during this PG era when it comes to such things. Swagger won a short nothing match with the Patriot Lock. The meat of this bout was the disturbing new WWE trend of the mid match heel reverse chin lock spot, which if you’ve been paying attention has become a company staple over the last few months. Move along, nothing to see here. 3/4*

While fast forwarding, I stumbled upon a New Day promo. Big E dancing in his pleated pants and making weird faces while sweating profusely with his sweat rag always amuses me. New Day were clearly set to be heels before Ferguson happened and the original angle was never followed up on. The act isn’t over at all as faces, and I think for the gimmick to have any legs it’ll have to be as militant heels. The problem is that the social climate in the country right now is something that I suspect WWE wont want to touch with a ten foot pole, so unfortunately for these three guys they’ll likely flounder as an undercard dancin’ & smilin’ face act until they quietly get broken up. If that’s the case, R-Truth should be put into this thing to waste away instead of Big E.

2. The Usos vs Slater Gator – The Usos on Superstars? Odd. This was given way more time than you’d think. Jey was the babayface in peril, and the heat segment lasted forever. Hot tag to Jimmy, and a big Samoan splash puts away Titus. Is there some sort of directive for every WWE announcer to say “shades of their daddy Rikishi!” when The Usos do the running corner ass smash? That wasn’t even a Rikishi move, it was an Umaga move, and after watching the Usos mini documentary I’m almost positive they do the move to honor Umaga, not their dad. I’m guessing Vince doesn’t want Umaga brought up on TV because he’s on the under 50 dead wrestler list. **

1. Paige’s fishnets vs Emma – Paige’s torn fishnets. Yowza. Put her in there with Carmella, and you’ve got yourself a Joe Lanza creepy customs match. Paige is really finding herself lately from a character standpoint. Moving away from AJ seems to have helped, too. Is it just me, or does AJ suck the life force out of every Diva she gets booked with these days? Her too cool for school dollar store CM Punk act, whether intentional or by osmosis from living with the man, just doesn’t work. As far as Paige goes, I think what we’re starting to see is a woman who no longer feels like the new kid, and she’s getting more & more comfortable spreading her wings and doing her thing. I predict a big year in 2015. Paige won this one with the PTO. **

2. Sin Cara vs REAL MAN Curtis Axel – Tom Phillips notes that this is the third match in four weeks between these two, in the latest Superstars three match series. Of course no mention of the Lucha Dragons or the fact that Sin Cara currently holds a WWE title, because why put the guy (or your developmental brand) over? There was also no promo time or character work for the REAL MAN, which once again disappoints me, not only because they’re ignoring a potentially good heel gimmick that could have real legs, but also because without the character work Axel is boring as fuck. This match consisted of two extended rest holds by Axel and a small package Perfect Plex reversal by Sin Cara for the win. Zzzzzzzzzzzz. *1/2

1. Summer Rae vs Emma – I know there are people who really like Summer Rae, but to me she’s never going to be good. Tom Zenk. LEONA Fujinami. Summer Rae. Some people just look like the have two left feet inside of a wrestling ring, regardless of whether they’re athletic otherwise. Summer Rae is a natural heel, and would make a great valet. Post Walmart heist Emma has become the Heath Slater of the Diva’s division, as an entertaining and talented jobber who makes everybody she faces look like a million bucks. Compare this Summer Rae match to matches where she faces equally green ladies like Naomi, and you can see why Emma is a step above many of the girls on the roster. Emma picked up a rare win here with the Emma Lock. Good for her! *3/4

They show a graphic featuring every Royal Rumble winner going back to the totally random and completely arbitrary cut off point of 2005. They could have easily fit, say, two more years onto the screen, which would have allowed them to show 2003 winner & current WWE World Heavyweight Champion Brock Lesnar. Hmm.

Speaking of Brock, they recapped the Chris Jericho/Paul Heyman/Brock stuff from RAW. What a bizarre angle. Jericho, the babyface, bullies the non wrestler heel, Heyman. Brock, the heel, comes to the aid of his friend to fend off the bully. Jericho, the babyface, swings at Brock first. Brock, the heel, defends himself, beats up Jericho, and in the process protects his friend, Heyman, who was the one bullied to begin with. I’m not trying to go full Cornette here, but the entire thing made no frigging sense. Jericho was a total asshole here, and Brock was completely in the right. I always preach more shades of gray in wrestling, but this was totally unintentional and not by design. Why would anybody boo Lesnar or think he was out of line in this situation, other than ” because he’s a heel so that’s why”? Even Heyman, who projects slime better than anybody, came off totally sympathetic here. Do you know how hard it is to make PAUL HEYMAN come off as sympathetic?

2. Los Matadores vs Tyson Kidd & Cesaro – Everybody’s favorite new tag team taking on the undercard babyface workhorse duo that Dean Ambrose was afraid the broken up Shield was going to turn into if he & Seth Rollins were the faces had Roman gone heel (true story, as told by Ambrose to Chris Jericho on Jericho’s podcast). Finally, after three Superstars eps and six matches, we had something to sink our teeth into. This was a hot match worked at a totally non WWE pace. I felt like I was watching a hot Dragon Gate opener or a New Japan junior tag, especially after watching Curtis Axel rest hold me to death on the previous two shows. Kidd & Cesaro won it with a powerbomb/blockbuster combo that I rewound about four times. What a cool finish! I have no confidence that the Kidd/Cesaro team is going anywhere because if Vince didn’t like Cesaro before, he probably has to prove some kind of point now since Steve Austin and everybody else on Earth does like him, so no matter how well he performs or how much he manages to get over with a prelim push the dude is going to be a victim of weird political games. But hey, if that means cool matches like this on C-level shows, I’m OK with that. This was so much fun. *** 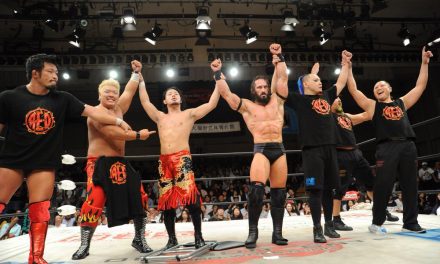 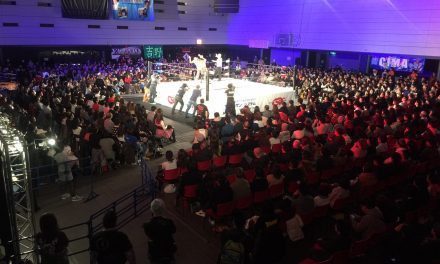 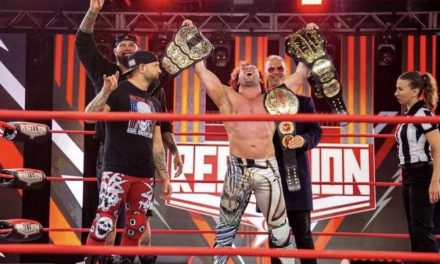