Last week, NXT put on what many (including myself) are calling the WWE Show of the Year, NXT Takeover: [R]Evolution. That the NXT brand is so good at building to these special events is both a blessing and a curse. Sure, when done right the simple, to-the-point A to B booking of NXT gives us a show like [R]Evolution. Feuds build up over months, culminating in a huge blow-off moments. It’s great stuff and certainly hearkens back to the days of yesteryear. The curse is between A and B and before we get to the special event climax, NXT tends to painfully boring. I use that term in the nicest way possible, boring doesn’t always mean bad but boring, well, means boring. NXT is great at foreshadowing future special event matches months ahead of time with a clear idea the path from A to B. The problem is, it takes months of largely nothing to get from A to B. [R]Evolution is B, but this episode of NXT has us back at A. Oh well, it’ll be worth it in the end!

The show opens, of course, with a recap video of NXT Takeover: [R]Evolution. It’s funny, if you showed this on Raw you may get some extra eyeballs onto NXT and, gasp, WWE Network. Maybe even people who don’t own WWE Network will see this other brand, exclusive to the Network is putting on great shows that you know, you can only see on the Network… silly, I know.

Adrian Neville comes out and says last week against Sami Zayn he had the best match of his career and that he doesn’t deserve to be cutting this opening promo, Zayn does. Unfortunately, Zayn couldn’t be hear because of one man, Kevin Owens. This prompts Owens from the back who says if Neville wants to do something about it and wants to fight, well, he’s got himself a fight. No official word on a match yet, but that will come soon enough — our main event is Owens vs. Neville.

The real MVP of the Owens debut may be CJ Parker who busted open Owens hard-way which made Owens look like an unbelievable badass. He still has the cut here (taped the day after) and it continues to make Owens look great. He needs to keep this forever.

Becky Lynch is backstage with Devin Taylor (HI DEVIN!). Becky says when she was being nice to everyone she kept losing and it got her nowhere. She opened her eyes and saw the light and now sky’s the limit. Good promo here from Becky who’s finally starting to find her footing in the character department.

Tyler Breeze backstage says he’ll be off NXT TV for awhile while he “models in Europe.” Don’t worry, folks. He makes an appearance during this run of TV tapings.

Bayley vs. Becky Lynch: Bayley, who is still selling her knee from recent Becky attacks, starts out with a ton of fire and some nice aggression. The commentators make note of Bayley’s newfound aggression and how it’s serving her well here. After a minute or so of offense, Bayley starts favoring her knee. Sensing this Becky starts attacking her knee with a series of tackles but Bayley continues to roll through them. Nice little story being told here as Becky is obsessed with taking out the knee and Bayley keeps countering. Finally, Becky gets Bayley to the ground, immediately throws on the Four Leaf Clover and Bayley taps quickly. Good work by both here. **1/2

The Vaudevillains are backstage with William Regal. Aiden English has an iPad (side bar: Really? If you’re going to go full on with the 1920s gimmick, he can’t be using an iPad. Have Regal in a darkroom with a projector and film or something… this made me irrationally mad.) Anway… English is showing Regal video of the team’s loss at NXT Takeover which shows Gotch being pinned despite English being the legal man. Regal says they’ll get a rematch soon. Really, an iPad?!

Bull Dempsey vs. Jesus De Leon: Independent wrestling fans may know Jesus De Leon as Mr. 450. He’s been toiling around the independent scene for quite a few years but is still very young (27). This was a decent little squash, even by Bull Dempsey standards. I do have one gripe here and it’s Bull’s finisher. It’s a top-rope headbutt. If you’re a super powerful dude, why not splash the guy, why not have a more “power move”? I don’t know, maybe I’m clouded by Chris Benoit and not enough by Bam Bam Bigelow but I think a more powerful, dramatic move would be better served for a guy you’re trying to get over as a powerhouse. It’s not a huge deal, either way De Leon did a great job of taking punishment and Bull looked decent here. *1/2

Baron Corbin vs. Rob Ryzin: I haven’t the slightest clue who Rob Ryzin is and Cagematch shows him having three career matches. It doesn’t matter, Corbin beat him in 14 seconds and I’ve already wrote too much about this squash. NR

Big Cass & Enzo vs. The Ascension: Are you fucking kidding me? Why are The Ascension back on my TV? They lost to Itami & Balor, they have promo videos on WWE television… why do I still have to see them? Go away already. These guys are NXT cockroaches.

Big Cass and Enzo do a 12 Days of Christmas routine that’s actually pretty funny. Big Cass has an angelic voice and Carmella is looking 5* here. I fully expected Cass and Enzo to dispose of The Ascension but nope, it was basically a squash. One minute domination from The Ascension as the commentary talk about them “regaining their momentum.” Please no. *1/2

Adrian Neville vs. Kevin Owens: Neville has been great as of late and this match was no exception. He was toeing the line between heel and babyface throughout the build to [R]Evolution but now he’s totally back as a babyface which is reflected in his offense. I’ve always been a fan of guys that can be shades of gray and Neville is doing a great job with it. He wasn’t “evil” in the build to [R]Evolution but he really wanted to keep his title, no matter the means. That’s cool storytelling. Anyway, Owens continues to jump out of the ring and stall time as Neville has his number. Neville was a flash of offense whenever Owens got into the ring with some crisp huricanranas and kicks. Owens slows the pace down and hits a sick-looking drapping DDT. Neville looks done for but he kicks out at 2.999 which electrifies the crowd. They find their way on the outside where Owens tosses Neville into the post. Both men are down after a grueling back and forth and we haev a double countout finish. It may sound bad on paper but it worked here and was a good strategy to keep both guys strong. Owens, enraged at the double countout, powerbombs Neville onto the apron. Owens continues to make a huge statement and Neville looked great here, solid main event! ***

This was a really solid episode of NXT with a blend of well worked matches and some early storyline progression. Go out of your way to see the main event, it wasn’t anything special but a good look at the direction of both Neville and Owens. 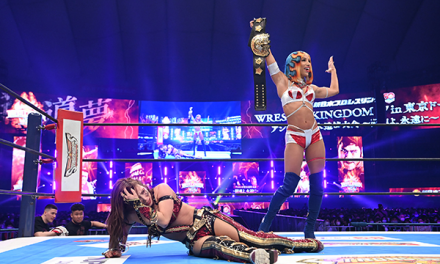