Since the first edition of this series was so successful I’ve decided to do another! We’ve got all your favorite promotions and stars (IWRG, CMLL, AAA and Myzteziz???) — let’s just get to the action with The Suicida Slate!

Dr. Cerebro vs. El Hijo del Diablo IWRG October 22, 2014: Back home again in dingy IWRG and it’s fantastic, the building is barely full and the lighting is god awful but it’s IWRG people (part of the charm). This is for the World Wrestling Stars Welterweight Championship, there are so many titles in Lucha it seems like NWA. Cerebro is accompanied by Golden Magic who you readers may know from the first edition of this column. Diablo reminds me of the uncle at the family reunions who is a crusty and nasty bastard but you can’t avoid him because he is always following you around because he has no friends. First fall has an exceedingly long Figure Four moment, exchanging of submissions, arm drags and a smidge of sloppiness. The second fall is difficult to watch and made me want to rip both of my corneas out, it had the longest hurricanrana into a pin that I’ve seen in ages (The whole thing was awkward and felt like it lasted longer than five minutes). Cerebro comes out of the gate in the third fall with flying headbutts and a senton along with tons of offense sprinkled in (I’ll give it Cerebro, he is making this watchable). The finish comes out of nowhere with Diablo catching Cerebro in a Dragon Sleeper and Cerebro taps. This was the worst Lucha match I’ve seen this year, there is no hyperbole there (I absolutely hated this and I am not starting things off strong with this dud). DUD

Maximo vs. Mephisto Copa Jr. VIP Final CMLL October 10, 2014: I never know what to expect from a Maximo match, it will either be full of comedy or some semi-seriousness but maybe I’ll be entertained. Mephisto gets too tricky for Maximo and rolls up Maximo in a schoolboy to take the first fall, which was quick. Maximo returns the favor to Mephisto in the second fall and it’s over quick with a single leg crab from Maximo that Mephisto taps to (If you get tired of the word quick after reading this I don’t blame you). Near falls between both men, Maximo gets a running hurricanrana from the ramp and follows it up with a tope suicida. Much like Cerebro, Maximo is making the match watchable while Mephisto is solid. Maximo gets a top rope hurricanrana and the fans are excited for all of this, both men are holding their own. Mephisto must be hitting the soda heavy because he hits CM Punk’s Pepsi Plunge. Maximo somehow kicks out and then gets a huge top rope arm drag that gives him the win. Both men played their roles great, Maximo with his flashy offense and Mephisto with his power moves and it was solid throughout (Plus the fans were excited about 2 guys who are mainly in the mid-card which is nice to know). Good for Maximo and I’m always a sucker for 2 guys giving respect to each other once the match is over. ***

El Mesias & Myzteziz vs. Hijo del Perro Aguayo & Texano Jr. AAA September 26, 2014: Big names in this match and I’m already preparing myself for the bloodletting that will happen in this match. We start with Mesias in control of Texano Jr. with shoulder blocks, a hip toss and a clothesline that takes Texano Jr. to the floor. Aguayo and Myzteziz are in to a loud crowd reaction, they love both men. Myzteziz is all over the place and connects with a tope suicida on the floor to Aguayo. Texano Jr. and Aguayo being nasty rudos decide to bring chairs into the match to bash in Myzteziz’s brain. Bull rope and a mask unveiling on Myzteziz but he covers up quickly and our beloved tecnicos are down. The tecnicos get a comeback off of some miscommunication on the rudos part and Myzteziz gets a spinning plancha and Mesias gets a powerslam. The tecnicos get the bull rope and we cry for the backside of Aguayo and then we cry for his nether region as the tecnicos blast chairs on him. The referee either does not care about rules or is giving all 4 men plenty of leeway. Tons of taunting goes on down the stretch and Aguayo is totally heeling it up, soaking in all of the fans hate. Mesias gets Aguayo in the corner and wails away with lefts, rights and boots to prove his point. There is way too much stalling involved in this match, I don’t know if they were going for something epic but this is not it. Mesias gets a lungblower, spear and tope suicida all in rapid succession, well as rapid as Mesias can be. It comes down to Myzteziz and Aguayo and after a little back and forth we get La Myzteziz to give the tecnicos the win.

The fans were hot for all four guys and Aguayo is money for AAA but this match-not so much. Too much stalling and here I go thinking we may get blood and we don’t, I know it’s not Monterrey but if you want to sell the fact these guys hate each other give the fans what they want. *

Malefico vs. Rey Cometa CMLL September 30, 2014: This one is for the Occidente Light Heavyweight Championship and happens to feature one of my favorite guys in CMLL, Rey Cometa. We start with some mat work and trading of holds and then Cometa hits a ridiculous tope suicida. Cometa captures the first fall with a single man Spanish Fly, Cometa looks great and Malefico is solid so far. Cometa takes the straps down inviting the wrath of Malefico who wrecks Cometa with an overhand slap to the chest. A spinning heel kick and a variation on the bow and arrow hold give Malefico the second fall and this has been a breeze to watch. They start with exchanging chops and slaps in the corner but the pace picks up and Cometa lands a moonsault to the outside. Cometa with a spinning cross body from the top rope and a roll through a powerbomb for the near fall only for Cometa to be dropped on his head with a Canadian Destroyer. A somersault plancha from the apron by Malefico and we tease a count out only for both men to roll in at the last minute. Cometa has to be in the discussion for Top 5 high flyers in the world with the work he’s doing. Cometa gets the 450 splash but Malefico gets the foot on the ropes, now that’s suspenseful man. Then we get a finish I cannot stand, Malefico’s second distracts the ref and Malefico sneaks in a low blow and gets the roll up for the third fall and the win. Up until the finish this match was chugging along just fine with a fun pace and some great back and forth. Cometa continues to be one of the best in CMLL and Malefico was decent and didn’t drag down the quality of the match. ***½

Hijo De Dos Caras vs. Demon Clown IWRG September 7, 2014: Demon Clown attacks as soon as the bell rings and we get a headlock and just general lazy work from Demon Clown, it’s pretty awful when he goes for a stretch in the first few minutes and barely puts any pressure on the back. Demon Clown tries for a suplex but Hijo De Dos Caras rolls into a small package to get the first fall. The break they take after the first fall feels like it takes an eternity. Demon Clown does what he does best in the second fall, sneak in fouls, chair attacks and brawling in the crowd. Of course we get the prerequisite in all of Lucha Libre, mask ripping-let’s just say it’s my least favorite thing in a match where there is no feud and no story is furthered. Hijo De Dos Caras makes his comeback with a dropkick, clothesline to the outside and a plancha. Then we get a ref bump-these belong in the 1980’s NWA and not in current wrestling. The seconds of both men get involved but Hijo De Dos Caras gets the better of the exchange and 2 consecutive frog splashes put down Demon Clown and mercifully this is over. This actually didn’t have both men have a fall before it was over as Hijo De Dos Caras won in 2 straight falls which was good. The match on the other hand — it was bad, Hijo De Dos Caras had to slow all of his offense for Demon Clown but he still got over with the crowd and Demon Clown attempted to look good for Hijo De Dos Caras. It’s over and I never have to see this again and if you want something for background noise this is it. * 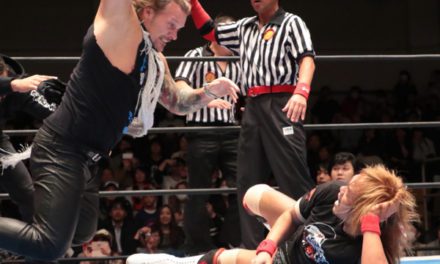 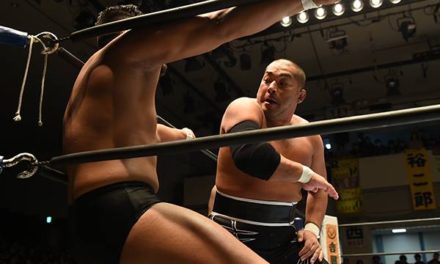