Our opening recap this week focused heavily on the Sexy Star vs Chavo issue and the events leading up to this week’s big three way ladder match main event of Big Ryck vs Johnny Mundo vs Prince Puma. No cinematic cut scene to start things off this week, as we got right to the action with the debut of a new luchador.

King Cuerno vs Super Fly: Super Fly was making his Lucha Underground debut here three days after losing his mask to Aero Star on a AAA show in Mexico. This was not a straight squash, but it was short and somewhat decisive, as Cuerno won it with The Big Game while Drago looked on (and drooled blood) from the crowd. *1/2

Next was a great profile video for Pentagon Jr. It was explained that although he was a talented fighter, he needed to go to Japan to diversify his game and take his skills to the next level. This was fantastic and made Pentagon look like a million bucks.

Chavo Guerrero vs Fenix: Although their relationship has been tenuous at best, Pentagon Jr accompanied Chavo to the ring. Fenix was seconded by Sexy Star. Vampiro called Fenix a former rookie of the year, but I couldn’t find any records of Fenix winning any major rookie of the year awards. Fenix (along with Pentagon Jr, then known as Dark Dragon) did finish in the top ten of the Observer Awards “Rookie of the Year” balloting a couple of years ago, but aside from that I have no idea what Vampiro was talking about. They kept showing Danny Trejo over and over, like UFC used to do with Michael Clark Duncan when he would be the only thing remotely resembling a celebrity at random UFC Fight Nights on Spike. As for the match, leave it to Chavo to drag Fenix, who has been a top performer on this show, down to his dry level. Chavo won a short match withe the frogsplash, after Pentagon knocked Fenix off of the top rope. Sexy Star cut a promo (in English), telling Chavo that “he” was coming back. She didn’t specify, but “he” figures to be Blue Demon Jr. **

A video package ran for (Brian) Cage. Cage is a dude with incredible upside and star potential whose attitude reportedly is what caused WWE to give up him. He’s a PWG regular who also had a short stint with DGUSA/Evolve a few years ago.

$100,000 Ladder Match – Big Ryck vs Johnny Mundo vs Prince Puma: I had a feeling this match was going to be long, as they really blew through the first half of the show, and this started with more than a half hour left. Standard ladder match rules applied, with the briefcase containing the $100,000 hanging from ceiling, with the only way to win to retrieve the case. Puma and Mundo teamed up to take out Ryck right at the start, allowing them to work a bunch of cool spots while Ryck sold on the outside. Mundo was the first to go for the belt, but Puma stopped him with an Ace Crusher off of the ladder. This gave Ryck and his gang time to recover, and they spent the next few minutes beating up the faces three on two.

The match was laid out nicely to this point, and wasn’t just a collection of crazy spots that these types of matches sometimes end up turning into (see: the recent TNA “Full Metal Mayhem” between The Hardyz, Team 3D and The Wolves). While Ryck was beating down Puma, Mundo recovered and put Cisco through two tables set up on the floor. Cortez Castro was working over Puma, and tried to suplex him through a table, but Puma reversed into a Meteora and Castro took the bump. Mundo hit Puma with a ladder, which left him alone with Ryck with everybody else taken out. Mundo laid Ryck on a ladder and hit End of the World, and Puma recovered to follow up with a 630. Later, Ryck used an overhead toss to throw Puma through a ladder that was set up across the ring apron and the guard rail. This took out Puma for good. Ryck was next to go for the case, but Mundo kicked him in the balls. Mundo climbed the ladder, but a masked fan hopped the rail and stopped him. The dude dramatically unmasked, but like Kid Cyclone unmasking on the Chikara PPV this past weekend, nobody knew who he was so it fell flat. Even Striker and Vampiro acted as if they had no clue. Mundo fought the “fan” off, and recovered in time to stop Cisco and Cortez from climbing the ladder (would that have counted anyway if they grabbed the case?) Mundo grabbed the case for the win. Cueto congratulated him for the win, and asked Mundo to return his key (Mundo had taken the mysterious key from Cueto as insurance a couple of weeks ago). Mundo teased giving it back, but KO’d Cueto instead, and then laid the key on his chest. Cueto took a five star bump, he’s some kind of overall performer. What a find. ****

This week was all about the ladder match, with totally skippable matches with no storyline advancement on the first half of the show. The ladder match had tons of crazy ladder match spots, but it was all very well paced and it had a great layout. They continue to slowly introduce characters week to week without shoving too much down the viewers throat at once. The novelty has worn off, as has the buzz, but the show still has my attention and is one of the few wrestling shows I look forward to watching each week. 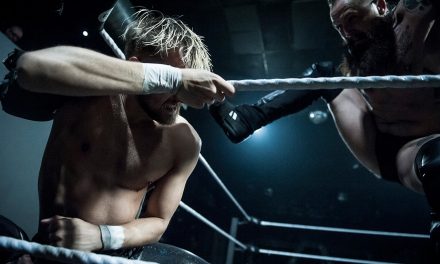 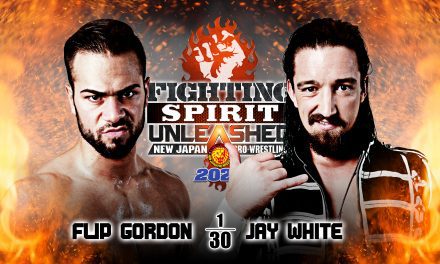