Smackdown begins inside of Santino Marella’s make shift office. Marella’s office is akin to Commissioner Mick Foley’s office back in the early 2000’s, albeit a little fancier.

We then get a recap of Team Authority destroying John Cena from this past Monday on Raw with the Anonymous Raw General Manager announcing that Cena will put his #1 contendership on the line against Seth Rollins in a Tables Match.

Intercontinental Championship – Dolph Ziggler vs. Luke Harper©: Ziggler gets a re-re-match due to defeating Luke Harper via count out in his original rematch this past Friday on Smackdown.

The first segment of this match is controlled by Luke Harper. The pace is slower with Harper beating down the underdog, Ziggler. During the commercial break, Ziggler gains the advantage after Harper rams his own shoulder into the ring post when moving target, Ziggler, jumps out of the way. The match picks up pace big time here as Ziggler begins to throw everything he has got at Harper. Superkicks, Sunset flip, ZigZag, Famouser etc. Ziggler can’t put Harper away, and Harper can’t regain control of the match. Out of desperation Harper kicks Ziggler in the groin forcing the referee to call for the bell giving Ziggler the win via disqualification. **3/4

Post-match Luke Harper grabs a ladder from underneath the ring and sets it up on its side inside the ring. Harper tries to power bomb Ziggler on it, but Ziggler counters and gives Harper an X-factor onto the ladder. This story has developed really nicely with Ziggler defeating the champion twice via count out and DQ to further it along. Simple storytelling that WWE should use more often.

Santino Marella comes out and quotes Oprah Winfrey, then schedules Ziggler vs. Harper in a Ladder Match at the TLC PPV for the IC title. Which begs the question, if Santino has been given power for one night, then why is he allowed to book matches for future events?

The Authority in-ring segment: Seth comes in as the acting leader of the Authority. Rollins is pretty decent in this role and it is always a good thing when the WWE gives wrestlers who aren’t the best at promos the chance to cut some promo’s on Smackdown. Rollins tells Cena that table splinters will be in his butt and then Big Show starts throw steel stairs around to intimidate Erick Rowan ahead of their stairs match at TLC.

The New Day (Xavier Woods & Kofi Kingston) vs. Cesaro & Tyson Kidd: The New Day is my new favorite thing in the WWE. It is a perfect way for these three men to have something to sink their teeth in and give them something to do as opposed to meaningless mid-card matches that were thrown together to fill time.

Woods and Kingston will be a fun team to ignite the tag team division with their speed and pizazz. This was a really solid match and the only way to describe The New Day is fun. After the New Day put Tyson Kidd away with their sick looking tag team finisher, which is a decapitator double foot stomp Gold and Stardust show up on the Titantron to cut a promo with actual meaning. As a longtime supporter of the Stardust gimmick I can understand the criticism he receives, much like Bray Wyatt, that his promos are full of nonsense despite the good delivery. This promo actual had purpose and substance, telling the New Day that the darkness is coming. The New Day then passes around the microphone cutting a positive promo about ridding the world of the darkness that is Gold and Stardust. The New Day is also giving these three some mic time to work on their character development. There are only good things that can come out of the New Day. The one thing the WWE has gotten right is developing wrestlers through trios.

Naomi Receives Flowers: Naomi is seen in the back with a bouquet of flowers at Jimmy Uso walks up to her. Naomi thanks Jimmy for the flowers, but Jimmy says that he didn’t get them for her and grabs the card in the flowers and it says “Apologies from The Miz”. Jimmy angrily slams the flowers on the ground shattering the vase. Say what!? Two feuds developed for two different tag teams?! Why couldn’t WWE be doing this in the crappy lull period between Summerslam to Survivor Series?

Dean Ambrose promo/segment: Dean Ambrose brags about destroying Bray Wyatt’s rocking chair and tells Bray he is going to pick him apart piece by piece like Dean did with the Rocking Chair. Lana comes out and announces that Rusev will not be competing tonight due to Jack Swagger’s attack on Rusev this past Monday on Raw. Lana goes on to declare that all American’s are a disgrace and are just opportunists. Rusev then gets on the mic and tells Jack Swagger that he will snap every bone in Swagger’s body.

Why isn’t anyone talking about how great Lana has been as a non-wrestler? Stephanie McMahon and Paul Heyman have had really great moments, but also some rough moments. Lana has at least been consistently good all year.

Dean gets back on the mic and tells Rusev that he is here to fight and leaves the ring to go after Rusev when he is taken out by Bray Wyatt out of nowhere. Bray attacks Dean with a steel chair jamming the chair in Ambrose’s throat and slamming it onto the steel steps. Paramedics and EMT’s come down to carry Ambrose out on a stretcher.

The Miz w/ Damien Mizdow vs. Jey Uso w/ Jimmy Uso: The Miz cuts a promo before the match telling Naomi that the Miz spoke to the same agent that made Kate Upton and Kim Kardashian what they are. Jimmy Uso storms out to the ring sans pomp, sans circumstance, sans Samoan battle cry, sans hip hop dancing. Jimmy is here for a fight.

Jimmy is immediately banned from ringside by the referee leaving Jey to wrestle a match with the Miz whilst having Damien in his corner. Damien is up to his usual nonsensical antics and ends up distracting Jey Uso thus giving the Miz the win. This is the first time the Uso’s are in an actual feud. Again, giving wrestlers something to sink their teeth into.

Brie Bella w/ Nikki Bella vs. Naomi: AJ Lee is on commentary for this match. This match was alright. Brie Bella has made improvements this year, but her “Brie Mode” scream/ pseudo fighting spirit battle cry is pathetic and always misplaced. It’s like she watched her husband do a similar thing and thinks its okay to put into matches at any time. Brie obviously doesn’t watch NJPW with Daniel Bryan at home. DBryan is probably constantly watching New Japan World while rehabbing. Just a random thought. Naomi knocks both Bella’s down, Nikki gets on the apron, AJ Lee knocks Nikki off the apron thus distracting Brie, and Naomi rolls Brie up for the win.

Santino Marella meets The Bunny: Santino is in the back talking to The Bunny about his grandmother. This wasn’t funny. I guess the point of this segment was to squeeze Santino into another part of the show???

Ryback & Erick Rowan vs. The Big Show & Seth Rollins w/ J&J Security and Concessions Kane: This was your typical WWE tag team main event with mashed up teams. Erick Rowan really shined here; maybe Dylan Hales’ “Erick Rowan Bandwagon” could use another member. Seth Rollins was also a highlight of the match. Concessions Kane gets kicked out by the referee who distracts Rollins giving Ryback the opportunity to nail Rollins with the Meat Hook clothesline and Shell Shock for the win.

This was a really nice episode of Smackdown. Aside from the obligatory Authority promo in the ring like we see every single episode of WWE TV, the rest of the show felt fresh and was fun to watch. It is nice to see some new feuds developing. It also appears that the “TLC PPV” is officially the “TLCS PPV”. They were calling it “Tables, Ladders, Chairs, and Stairs.”

Thanks for reading! If you want to read more of my thoughts on Pro Wrestling, follow me on Twitter @LuchaNerd! 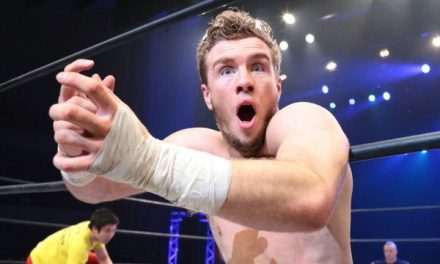