Now that the honeymoon is over, one of the prime criticisms of Lucha Underground (particularly from Dave Meltzer) is that the show suffers from a lack of long term direction. We know they aren’t building to a PPV. The season format probably means that they won’t be building towards any sort of major show either, unless they plan on doing something special with the season finale(s).

To this I say, so what? Why *must* the show be building towards something bigger? What has made Lucha Underground feel special, and what to this point has set it apart from every other televised wrestling promotion, is the fact that the presentation has been so different. Wrestling is wrestling, but what Lucha Underground has been successful at, if nothing else, is completely shattering modern wrestling tropes, or reinventing the ones they’ve chosen to adopt. This is not episodic wrestling television building towards a non episodic climax, this is simply episodic television that will presumably will lead to an episodic conclusion. This is a TV show, which just so happens to also be a wrestling show, with one of television’s most highly influential and successful producers behind it (Mark Burnett). There are fresh minds with fresh visions driving this thing, and these people are not married to or tied down by the boundaries of what a wrestling promotion has to be. With all of the talk this week about Vince McMahon’s interview with Steve Austin and his awkward, cringe inducing insistence of  calling his product “Sports Entertainment” as opposed to what it actually is, pro wrestling, the irony is that Lucha Underground has gotten much closer to Vince’s vision of sports entertainment in six weeks than Vince has managed to do in 30 years. Lucha Underground is a television show made by television people that just happens to be about wrestling. It has not, and should not, behave like a traditional wrestling promotion. What they are doing may not ultimately succeed, but neither will attempting to be WWE Knockoff v9.0.

We start off this week with Big Ryck signing an “exclusive contract” with Lucha Underground, and demanding his $100,000 signing bonus in cash, up front. Dario Cueto agrees. What is so great about Cueto is the nuance he displays in these cut scenes. There is a tinge of nervousness in both Cuteo’s voice and his facial expressions when he’s dealing with people like Ryck, with a level of subtlety that the large majority of wrestling personalities can not achieve. Cueto’s acting makes even highly praised wrestling performers like Stephanie McMahon look like amateur hour.

Son of Havoc is in the ring with Ivelisse. SoH is tired of wrestling women and “half men”, and challenges any MAN to face him in the ring.

1. Son of Havoc vs Pimpinela Escarlata – Welp, he wanted a man, and he got one. Sort of. He got a transvestite exotico, Pimpinela Escarlata. Matt Striker & Vampiro gave a lazy history of exotico culture in lucha, and instead of running off a list of famous luchador exoticos, Striker rattled off a bunch of decidedly non Mexico based wrestlers like Gorgeous George, Exotic Adrian Street, Ricky Starr, and THE MIZ. Oh Matt, you wacky ribber. This was given a decent amount of time, and gave SoH his best chance to date to show off his ability. He worked hard here, and he needed to, because Pimpinela is starting to look old & slow, which especially stands out on a show that features some of the best young talent in the world. Still, Pimpinela is good enough at the gimmick to survive not being at the athletic standard of the rest of the roster, particularly if he’s used as a lower card act. For the finish, Mascarita Sagrada did a run in, and they cut to a very strange angle to avoid showing the Pimpinela kiss attack, with Striker screaming THE KISS to make sure you knew what happened. That’s sure to rattle some PC cages. Pimpinela danced with Sagrada to celebrate the win, while the sexist/bigoted/transphobe duo heeled it up on the outside. I smell a tag team match. **

Johnny Mundo corners Cueto in the corridors of The Temple, and a terrified Cueto promises him his $100,000 in cash if he let’s him go. Mundo rips the mysterious key off of Cueto’s neck, and says he’s taking it for insurance.

2. Famous B vs Mil Muertes – I immediately smell jobber, as SoCal indie veteran Famous B is introduced as “already in the ring…”, like he’s the Brooklyn Brawler circa 1989 about to get squashed on Wrestling Challenge. Indeed it was a squash we got, as Muertes used a spear and a flatliner to quickly put away his man. Poor Catrina had to lick another face. This is easily the worst gimmick in all of wrestling. Absolutely disgusting. Muertes has looked completely indestructible, and has effectively been built up very well as an unbeatable monster. *

3. Drago vs King Cuero – This was a rematch from two weeks ago, where Drago spoiled Cuerno’s debut. Cuerno got a measure of revenge last week by attacking Drago following Drago’s loss to Muertes. For some reason Striker called this match a “journey through the savage garden”. This Savage Garden? The one that had everybody in 1997 wondering if he was really saying “cherry cola”? The unnamed lady from last week showed up during this match and seemed to be scouting Drago again, before once again scurrying to away before the end of the bout. Drago did his usual great flying, and at one point used a resthold on the outside after doing a dive. That’s something new. Drago tried to win with the wacky cradle combination that he used to beat Cuerno the first time these two met, but Cuerno kicked out. Cuerno made a comeback with a suicide dive and his “Thrill of the Hunt” (fireman’s carry into a front driver) finish to even the series at 1-1. Striker strongly implied that they would meet again at some point. **1/4

Mundo showed up in the ring, with the key, and demanded that Cueto come out to give him his $100,000. Big Ryck showed up instead, but Mundo did a dive to take him out. Mundo gave Cueto a count of ten to show up, or I guess he was going to destroy the key. This time Konnan came out, and said Mundo should give the money to Prince Puma. Why? Ryck attacked Mundo, but Puma made the save. Puma & Mundo then came to blows, and a wild brawl broke out bewteen Puma, Mundo, Ryck, and Ryck’s gang. Cueto finally showed up with the cash, and said he was settling things by offering up the $100,000 in a winner take all ladder match. Everybody seemed happy with this, which was the first example of WWE style storytelling that makes no sense. Why would Mundo accept this? He was promised $100,000 twice, and Cueto has yet to deliver. Ryck was also promised the money in the form of a signing bonus, and was also screwed. Seems like a great deal for Puma, but not so much for the other two dudes.

4. Chavo Guerrero & Pentagon Jr vs Sexy Star & Fenix – Pentagon never really chose a side last week, and they teased some uneasiness between he & Chavo right off the bat during the introductions. Fenix has been as impressive as anybody on the roster so far, and seems to be getting over big too. Fenix & Pentagon Jr have tremendous chemistry together. I’ve heard some complaints that Sexy Star might not be the best person for her role, but she looked really great here, especially on the hot tag where she was straight up fire. Fenix saved Sexy Star from a Chavo frog splash by kicking him off of the top turnbuckle to the floor, then saved her again from Pentagon’s Easy Driver. A sunset powerbomb from Sexy Star and a Meteora from Fenix finished off Pentagon as Chavo looked on from the outside. It looked like Chavo could have saved Pentagon if he wanted to, but Chavo is the ultimate heel prick and a man with no allies. A great match to finish the show. ***1/4

Lucha Underground may or may not have a long term direction, but what it does have is tremendous short term direction for everybody on the roster.Everybody has a clear story and a clear motivation, even if the $100,000 dispute has a few minor holes. We also know a title tournament is coming, so from this reviewer’s perspective, direction isn’t much of a problem for this show at all. 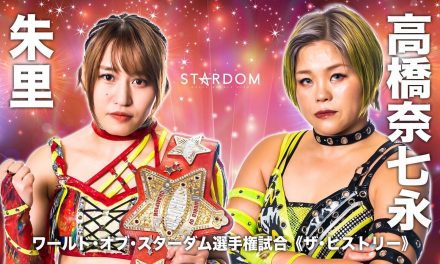