Tomorrow Never Dies is a fitting title for CHIKARA Pro’s final event of 2014, as the promotion itself came back from an assumed death after a one year blackout. After a hot angle at National Pro Wrestling Day lauding the company’s return, and a successful return to iPPV with You Only Live Twice, CHIKARA settled into a relatively quiet season. Regardless, CHIKARA’s return was one of the biggest wrestling stories of the year and one that delighted the outfit’s dedicated fan base. Alright, let’s quit the exposition and get to some wrestling!

Pre-Show Match for the Young Lion’s Cup, Heidi Lovelace vs. Missile Assault Ant: A common criticism of inter-gender wrestling matches is that often the female competitor usually takes a tremendous beating only to win on a fluke. This match followed that script to the letter. Thankfully, Heidi Lovelace has the ability to transcend such a limiting story and really get a crowd behind her. She was able to overcome the odds of a stronger opponent and his Colony Xtreme Force cronies become the first female Young Lion’s Cup winner. Most impressively, she got a huge pop and chant from the crowd after she got the win. Overall a nice match that was able to overcome the stigma attached to inter-gender wrestling. **½

German Suplex Match, Juan Francisco de Coronado vs. Ashley Remington: The stipulation for this match was that a competitor could only win the match with a pinfall following a German Suplex. I appreciate CHIKARA trying to incorporate the angle into the blow off match for this feud but it really limited what otherwise was a solid opener. What bothered me was things like Coronado diving to the outside did not make any sense. Why would he want to punish his body to the point where he could not lift Remington? I will give Coronado credit for working over Remington’s back to soften him up for the move. Remington still got the win by using a deadlift German Suplex for the win. Much like the stipulation, the finish hurt this match. ** ¼

Eddie Kingston vs. Jimmy Jacobs: From what I understand this was a pretty heated feud. Kingston took that to heart by chasing Jacobs to the floor at the opening bell. Jacobs turned the tide with a Contra Code on the floor. From that point on, Kingston and Jacobs put on a short but fun back and forth brawl. Kingston won with two backfists to the Future which Jacobs sold like he had been hit with a brick. **¾

Post-match Kingston was attacked by Kid Cyclone who unmasked and cut a great promo denouncing tradition and the fickle nature of everyone towards the bi-polar actions of Eddie Kingston.

2 out of 3 Falls for the Campeones de Parejas – Devastation Corp. vs. The Throwbacks: This was the second and final title match of the night. The first fall was evenly contested and ended with a wheelbarrow lift/splash combination from Devastation Corp. I liked the dynamic of the champions being down 1-0 early, it made it easier to root for them to make a comeback. Like any great team, The Throwbacks rallied in the bottom of the ninth. Devastation Corp. went for the combo that netted them for the first fall only for Mr. Touchdown to make the save with a Hail Mary roll up to even up the match at one fall apiece. However, the heroic rally did not warrant a heartwarming ending. Devastation Corporation’s manager broke up a sure-fire Throwback three count following a 3-D. Mr. TD went to knock his block off but only managed to grab a hair piece for his efforts. The distraction allowed for the bad guys to take advantage and win the final fall.

I cannot laud this match enough as it told the perfect story for a 2 of 3 falls match. The villains win the first fall backing the good guys into a corner. With the crowd on their side the heroes fight back valiantly and notch a fall. Then when evil appears to be vanquished a cheap trick breaks the crowd’s hearts. ****¼

Ultramantis Black vs. Delirious: These two went for the heavy artillery early by trading Praying Mantis Bombs for a series of nearfalls. A ref bump allowed for Delirious to level Ultramantis with his own staff for another close two. Despite that the Great and Devious One was able to hit a flurry of offense culminating in a final Praying Mantis Bomb to banish Delirious back to ROH. After the match, Delirious got the last laugh by using the Eye of Tyr to hypnotize Frightmare and Hallowicked to turn on their Spectral Envoy stablemate.

This one was an overbooked mess and went a little too fast for a blow off match for a feud that had some much history. I am interested to see how the fallout progresses going in 2015. **½

Cibernetico Battle Royal, Team Flood vs. Team CHIKARA: I am not a huge fan of battle royals, even ones with a unique concept like this. With that said I did think this was a good match. There were nice dive spots and drama with the Ants at the end, but there is not much more I can say about this one. ***

Steel Cage Match, Deucalion vs. Icarus: The man who wanted to kill CHIKARA against the man who gave everything to save it. An epic story that gave the main event an important feel. A match so important that only the ultimate feud ending match in wrestling could house it, a steel cage.

The story of this match was that Icarus knew this was a straight fight. He came out pummeling the big man only to eat several throws and even a powerbomb into the unforgiving steel. Icarus still was able to get a few strategic blows in. He scaled the cage to get a height advantage and landed several stomps to Deucalion’s throat. To counter Deucalion’s brutal finisher, a chokeslam into a knee, Icarus targeted the monster’s right arm.

When Deucalion would not stay down Icarus tried to knock his opponent out with several kicks to the head and a Blu Ray into the cage. Did that flurry cause Deucalion to fall? No! Not even a super hurricanrana from the top of the cage could end The Flood’s leader. Just when Deucalion was going for the kill shot, Icarus countered into a CHIKARA Special for the tap-out victory.

A very good match with a very good story. Deucalion was treated like a monster and Icarus used smarts and a little luck to get the win. ***¾

CHIKARA is not for everyone — the characters are colorful, sometimes the angles insult your intelligence and the wrestlers are not the best athletes. Still, fans love this promotion and for good reason.

The stories are simple and easy to digest. Each match tonight used the wrestling ring as a way to enact a narrative. Was the work rate the best in most of the matches? No, but most of the matches were solid undercard fair and the three hyped matches, especially the tag title match, were superb.

For those that thumb their noses at the Baskin Robbins of professional wrestling, I challenge you to sit down and watch this show. If you do, you will have fun and enjoy the simple pleasures of a quality wrestling show. 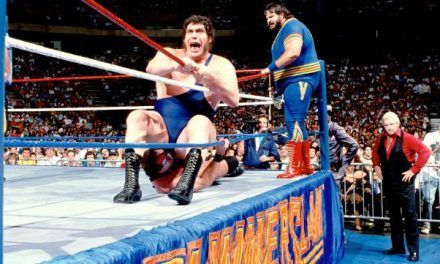 Off The Top Rope: WWF SummerSlam 1989