Hey look, it’s everyone’s favorite indie promotion in Japan, Big Japan Pro-Wrestling! This is their ongoing tag league which has a Strong Block and a Death Match Block (Personally I could do without the Death Match Block but it’s Big Japan and they are the masters of death matches). The Strong Block matches on this show look a million times better than the Death Match Block but who knows I may end up enjoying both. Is it a coincidence this happens to fall on Halloween? Who knows? For those of you who cannot stand “garbage” wrestling turn away now, but for those brave enough to stay I promise this will be rewarding. Or you will end up hating yourself much like me and then we all happen to lose. So let’s Big Japan baby! Big Japan baby!

Barbed Wire Board Death Match – Jaki Numazawa & Masashi Takeda vs. Masaya Takahashi & Takayuki Ueki: I have never seen both Ueki and Takahashi but they have tons of fire and they will need it against two veterans in this death match business. Ueki immediately gets thrown into the barbed wire board and then Takahashi gets the same treatment. The whole match is Numazawa and Takeda obliterating the kids and being arrogant pricks about the whole situation. Tons of chair spots, barbed wire board spots and nasty offense from ZawaKeda — I’m calling them that now (Copyrighted by Rob and for Rob). Is it fair to say Numazawa may possibly be the most out of shape wrestler I’ve seen in ages? Ueki and Takahashi get a couple hope spots and get some decent looking offense in between. Here’s my advice to any hopeful death match wrestler or wrestler period: Never take unprotected chair shots to the head. The headbutts in this match would make Tomohiro Ishii blush and smile at the same time. The finish sees Takeda hit a half nelson suplex, big running knee and an Olympic Slam onto the plunder to win. Decent little opener here but some of the most dangerous stuff in this was the strikes and not the weapon spots. **

Speed Of Sounds (Hercules Senga & Tsutomu Oosugi) & MEN’s Teioh vs. Heddi French, Shiori Asahi & Shinobu: Teioh and Asahi start if off until a stalemate and then Hernandez’ and Chavo Guerrero’s younger brother Heddi French comes in against Oosugi. Shinobu and Senga turn into kissing cousins in a few funny moments but that ends quickly when Speed Of Sounds hits some double teams and Shinobu gets his pretty looking dropkicks here and there. You know what I realized in this match? Shinobu needs to be in New Japan’s BOSJ just to show BJW isn’t just death matches. Teioh and Asahi exchange some very nice pin attempts and then bodies are flying all over. The end comes down to Shinobu and Teioh with Shinobu avoiding several Miracle Ecstasy attempts until he eats a Speed of Sounds super kick (Lots of alliteration there people) and then a triple Miracle Ecstasy finishes off Shinobu. Everyone got to show off a little bit and Shinobu of course shined as usual while the other guys were all solid. **

Saikyou Tag League 2014 Death Match Block Open The Box Surprise Death Match – Abdullah Kobayashi & Ryuji Ito vs. Brahman Kei & Brahman Shu: I have this weird feeling that if Vince was to pick up The Brahmans he would make them Kaientai Lite but with more crowd participation, heck he may even try to turn them into the Japanese equivalent of Gallagher. The match is exactly as it reads, a bunch of random boxes that are full of surprises that neither team knows of, should be interesting. The whole match is full of shenanigans included but not limited to: tongs, frying pans, aluminum foil fingers of death, nipple pinching, groin grabbing, tangerines, tennis racquets, jack-o-lanterns and Singapore canes just to name a few. We almost get a Rainmaker with a tennis racquet and we get Great Muta mist from his disciples The Brahmans. I take back what I said about Namazawa, Kobayashi is out of shape but he is an Abdullah and all Abdullah’s are not known for their physique. Kobayashi gets a head chop from the top rope followed up by a frog splash from Ito to finish off the Brahmans. This was not a wrestling match and purely comedy but it was entertaining. * For the match. ***** For the spectacle.

Saikyou Tag League 2014 Strong Block Match – Kazuki Hashimoto & Koji Kanemoto vs. Wild Network (Manabu Soya & Ryuichi Kawakami): Now this is a match that has the makings to be match of the night and possibly the tournament. All I know is that it is time for some hoss work and stiff strikes in this match up. Kawakami and Kanemoto start off with some strike exchanges which Kawakami gets the better of. K-Hash is worked over by the Wild Network, some fun face in peril stuff here. Kanemoto tries for the interference but is met with a Soya Death Valley Driver and K-Hash tries for a comeback. Kanemoto and Soya trade some big bombs back and forth until both men are down and once they get up we get another strike exchange. Double face wash montage from K-Hash and Kanemoto met with double team lariats and forearms from Wild Network. Double ankle lock spot from K-Hash and Kanemoto followed up by double kicks but Soya breaks it up. More big bombs down the stretch and near falls that are making the crowd get behind K-Hash and Kanemoto. The finish sees a Kanemoto moonsault followed up by a Northern Lights Bomb from K-Hash to put down Kawakami for the win. I felt like they were holding back here and perhaps if they had 5-10 more minutes the match would have benefitted. That being said this was a hard hitting affair full of some fun double teams and it made the fans hot. ***3/4

Saikyou Tag League 2014 Strong Block Match – Daisuke Sekimoto & Hideyoshi Kamitani vs. Twin Towers (Kohei Sato & Shuji Ishikawa): Somebody better have packed a lunch because someone is getting obliterated in this match and it will be anyone’s choice. Kamitani and Ishikawa start off but everyone wants the bulls Sato and Sekimoto to go at it and they give the fans what they want. Those are some deep headlocks from Sekimoto that Sato struggles mightily with and then they transition to shoulder blocks, this can’t end well. Chops and slaps but Sato wrecks Sekimoto with a well-placed forearm and then Ishikawa lays in more damage. I can’t even describe the rest but both teams just unload heavy artillery and it’s uncomfortable to watch unless this kind of attrition is right up your alley. Kamitani is beaten relentlessly making the fans gain sympathy towards him and making the Twin Towers want to unleash more brutality onto him. Kamitani gets the hot tag to Sekimoto and it’s time, it’s time, IT’S DAISUKE TIME TIME TIME!!! In my fantasy world Sekimoto would destroy Brock Lesnar with less than 16 suplexes in a hoss extravaganza. Daisuke tries for the frog splash but Sato gets his knees up and tags to Ishikawa who is looking for a receipt. Daisuke gets a top rope brainbuster on Ishikawa and gets the tag to Kamitani who eviscerates Ishikawa with multiple dropkicks. Ishikawa gets back into the match with a vicious headbutt and then Kamitani gets folded up with a Sato German suplex and a huge running knee from Ishikawa but Sekimoto breaks it up. The last few minutes are exciting and everyone plays their role perfectly. Huge Falcon Arrow from the top rope from Sato on Sekimoto and Sato goes to work with kicks. Kamitani even saves Sekimoto at the end and Sekimoto finally finishes off Sato with a huge lariat and his Everest German suplex hold to beat the unstoppable Twin Towers. This was a perfect example of what Strong Big Japan is and why I think they can go down this road and do away with death matches. This was brutal, exciting, powerful and a joy to watch. This makes me want the Strong Big Japan division to invade New Japan just so we could have Sekimoto, Sato, Ishikawa, Kawakami and others fight against some of the more strong style workers, i.e: Sekimoto vs. Shibata is my money match. ****1/4

Sakiyou Tag League 2014 Death Match Block Scaffold Death Match – Yankee Two Kenju (Isami Kodaka & Yuko Miyamoto) vs. Heisei Gokudo Combi (Kankuro Hoshino & Masato Inaba): Isami Kodaka is a good enough wrestler that he can actually get away from his death match roots and I would be fine with it, I could say the same about Miyamoto while Hoshino and Inaba are just garbage. The light tubes immediately come into play as Miyamoto’s head is carved up and Kodaka’s back meets them. We get a BJW staple, no not the staple gun but another staple as both teams brawl through the crowd. Miyamoto and Inaba are already on the scaffold not 3 minutes into the 3 match and we get a few creative spots with the scaffold. Kodaka almost falls on his face while trying to dive off the scaffold onto Inaba and Hoshino. Miyamoto gets the shotgun knees with light tubes but Inaba nails him with a lariat and catches Kodaka and turns it into an Exploder (Maybe Inaba is not a garbage wrestler after all). Both Hoshino and Kodaka psych themselves up by smashing light tubes over their heads and then Miyamoto destroys Inaba on the scaffold only for Hoshino to hit a body slam from the scaffold on Miyamoto followed up by a senton from the scaffold but Kodaka breaks it up. Hoshino goes to town on Miyamoto but Miyamoto turns it around with a drop toe hold onto light tubes and gets the La Magistral to win the match for Yankee Two Kenju. I’ve seen good death matches (Believe me it is possible). I’ve seen bad death matches (More than anyone would care to know). This was middle of the road and it was slow in most parts, the fans were hot but all 4 guys tried their best and that’s all that counts in wrestling, right? Afterwards all 4 teams who were first and second in both strong and death match blocks have a confrontation thus setting up the semi-finals on November 21st. **3/4

Go see both Strong Block matches from this, everything else you can skip unless you want to see the spectacle of the Open The Box Surprise Death Match and look befuddled while watching. I really think that Big Japan could become strong style and do away with the death matches but I don’t own the company and therefore don’t make the decisions. Again if I did anything right or wrong you know the Twitter handle @RobsBrutalWorld. 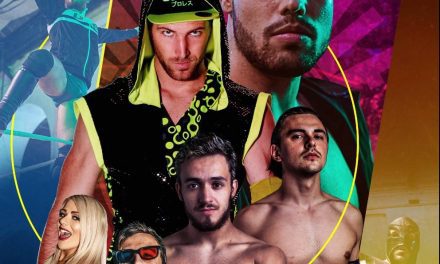 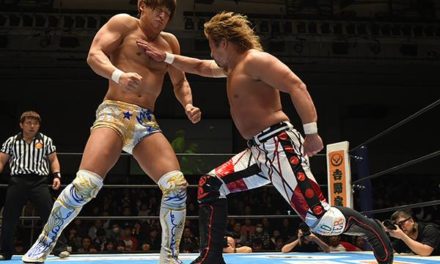 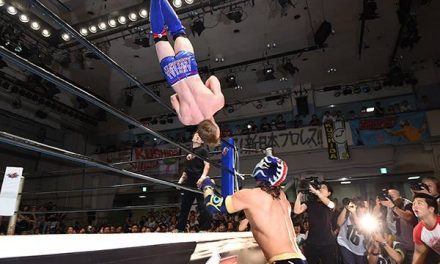 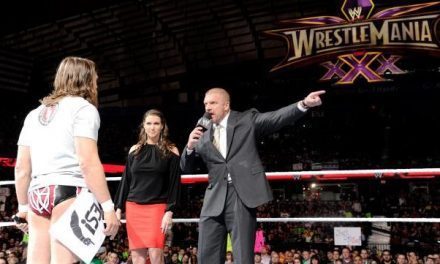