The last Ring of Honor show I reviewed ended a streak of amazing episodes. Hopefully, the two episodes in this review will be of higher quality. Both episodes feature tremendous matchups on paper, Cedric Alexander vs. Adam Cole and three championship matches in the next episode. Enough preview, let’s get to the wrestling.

Hanson vs. The Romantic Touch: Hanson came out to a nice “War Machine” chant from the Wheeling, West Virginia crowd and in a nice touch gave a shout out to his injured partner Ray Rowe. His opponent is a personal favorite of mine, The Romantic Touch. Rhett Titus has taken what could have been an awful gimmick and made it a potential guilty pleasure for many fans. Everything from playing the guitar on his rose to the goofy accent will make you smile. Major kudos to Titus for putting in the hard work over the last year to get the character over.

The match was designed to put over Hanson, who is getting a nice mid-card push, so a squash was in order. This match’s story was what you could expect of a comedy character against a burly powerhouse. Touch frustrated the big man with his goofy antics and eventually was done in by stiff blows. The finish was somewhat of a letdown due to Hanson’s spin kick finisher looking a little softer than usual. Still, with the short amount of time they were given to work the match served its purpose and was an easy watch. **

After the match the new number one contender to the ROH World Championship, Michael Bennett, sauntered to the ring with a goofy smirk on his face. His Kingdom partner Adam Cole, skulked in the background for much of the segment. Bennett went on about how every kingdom needs a crown and claimed that after he beat Jay Briscoe that the faction would have two crowns. A fed up Cole took the mic and blasted Bennett for not following the plan and helping him win the Honor Rumble. Cole claimed that he was the only king in The Kingdom. Out of nowhere Maria Kanellis backed Cole down and whispered something to him that pacified the former champion.

This was a nice little segment that teased dissension within the group. For any one that is a fan of the more subtle side of professional wrestling just watch how Adam Cole handled himself through the promo. His body language and facial expressions told the whole story of frustration and anger his character is going through.

T.D. Thomas vs. Adam Page: Before the match started Jimmy Jacobs said that The Decade was all about giving opportunity to the younger members of the ROH roster. He said that the match was chance for both men to make a lasting impression, especially since the match was no disqualification.

In a great touch of foreshadowing the eventual breakup of The Decade, B.J. Whitmer and Jimmy Jacobs both openly applauded their chosen young boy. The match showcased just what pricks The Decade are. When Thomas and Page locked up to being the match Jacobs loudly yelled “Boring” and started throwing weapons into the ring.

Adam Page showed a nice aggressive streak in this match by throwing T.D. into the barricade with a good deal of force and then throwing a chair in his face like a lawn dart. Later in the match with Thomas in a tree of woe Page clubbed T.D.’s prone knee with a chair. Page’s aggression really fed the story that Whitmer’s bullying is making his mental state volatile.

During his entire angle with The Decade T.D. Thomas has been portrayed as more level headed than Page. He openly questioned The Decade on a few occasions and during the match tried to avoid using weapons. At the one point Thomas did use a chair he appeared openly conflicted about his actions despite pleas from Page to hit him with the chair. Thomas finally gave in and used it on not Page but Jacobs before walking out on the match resulting in it being thrown out.

Rare is it that a match that is more of an angle actually works, this match went against that grain. Every player and their actions served to further the storyline, which is surprisingly compelling. ***

Cedric Alexander vs. Adam Cole: If you keep up with my ROH reviews, especially during the first half of the year, you will how high I am on Cedric Alexander and the way he was booked during his feud with Roderick Strong. Since that feuds conclusion Cedric has been grinding gears. He has had two high profile title matches and lost both. It is frustrating to see a guy get build up and then spend the next few months aimless. Regardless, both he and Adam Cole have delivered in the ring as of late and I was really looking forward to this match.

The commentary team did a great job explaining the losing streaks both men were on prior to the match and made the contest feel important. Early in the match Cedric used his athleticism to control the pace and frustrate Cole. Every now and again Alexander would slip up and try something to fancy like going up top or going for a dive. Cole used both instances to sneak in some critical offense.

Alexander was in control for majority of the match and got several near falls as the contest started to reach the finish line. It took a super kick to the knee and a missed frog splash by Alexander for Cole to really take charge of the match. In the end it took Adam Cole one Figure Four, three super kicks and a Twist of Fate to beat Cedric Alexander.

Neither man came out of the match looking bad. Adam Cole finally got the big win he needed and Cedric Alexander took everything Cole had and it still took a move Cole rarely uses to beat him. Great main event with a great story. ***1/2

Each player in the contest did exactly what you would assume they would do. Jimmy Jacobs tried to cheat and flew around the ring. Roderick Strong and Kyle O’Reilly brought their patented stiff offense. The man with best mustache in wrestling, Bobby Fish, wrestled a solid albeit conservative match. There is a rather nice spot involving a game of chicken and dueling guillotine chokes that is worth your time to seek out.

I was not fan of the finish, which saw Adam Page try to slide a steel chair into the ring while B.J. Whitmer distracted the referee. Roderick Strong was the legal man and refused to use the chair and argued with Page about it, a few seconds later he fell victim to Chasing the Dragon and the champions retained. I understand the point was to cause further tension between The Decade but this felt like overkill especially since the angle from the previous episode dwarfed this incident in quality. Other than that this was a solid affair. ***

ROH World Television Championship Match: Will Ferrara vs. Jay Lethal ©: Ferrara got the title shot by eliminating Jay Lethal from the Honor Rumble. Lethal was so embarrassed that to get revenge he put his title on the line to give Ferrara an incentive to accept the match.

I’ve gone on record as saying that I am not a big fan of Jay Lethal’s run with the belt so far. Outside of two good matches against ACH and Kushida the bouts have been repetitive and usually end with outside interference. This match is another in a long line of bad title defenses. To start the match off Lethal brought the aggression and pummeled Ferrara. He got retribution by tossing the smaller challenger over the tope on three occasions. Ferrara got no offense in during any of this and the match felt flat for the rest of its duration, even when Ferrara had a nice comeback towards the end.

The second match on the card had a solid story going into the match and could have served as a vehicle to showcase an aggressive streak in Lethal. I had no problem with him squashing Ferrara during the early part of the match. It just should have ended there and instead it became a slow and disjointed match that serves as another example of why Lethal needs to drop the TV Championship. *¾

ROH World Championship Match: Mike Bennett vs. Jay Briscoe ©: This match was a collective meh. The crowd, the participants and even Todd Sinclair did not seem to care. For most of the match the offense consisted slowly of head-butt, kick, jab etc. Hardly the recipe for a decent match between two men who have a heated past.

One noteworthy event from the match was that after Jay Briscoe retained the title Matt Taven ran out to attack him and in the processed joined The Kingdom. A disappointing ending to a middling episode of ROH TV. **

ROH is two for three in delivering mediocre episodes this month. Episode 162 reeked of malaise and I encourage any fans of the product to avoid it at all costs unless you want to match the tag title match which was good. Now episode 161 was solid and is more along the lines of the quality product ROH has been delivering the last few months. Adam Page and T.D. Thomas’s match and the ensuing angle was very well done. Cedric Alexander and Adam Cole had an excellent main event that needs to be seen. Next week’s main even is Matt Sydal vs. AJ Styles so I expect the quality of that episode to be excellent. 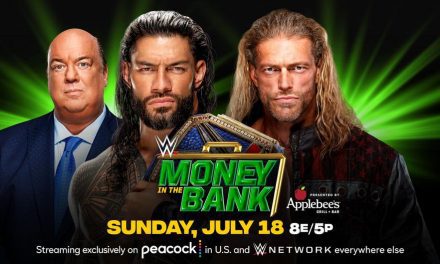 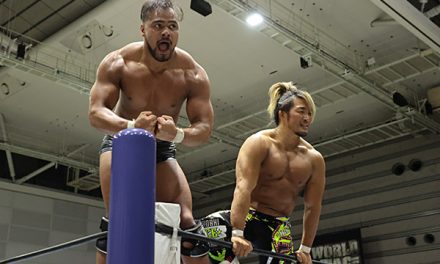