Finally, OVW has posted their Saturday Night Special on Vimeo. The SNS is the OVW’s monthly special event show or “PPV” that can be purchased through Vimeo or on ovwrestling.com for the low price of 99 cents. Now let’s get to the show!

The show kicks off immediately with Body Guy coming out sporting a new mustache in time for Movember. Body Guy is also wearing new gear, long gold tights and a tiger striped bandana covering his newly dyed blond hair. His gear goes perfect with his sleazy heel gimmick and makes him look like a combination of Michael P.S. Hayes and Rick Rude.

Body Guy vs. Dylan Bostic: This is my first time watching former OVW TV champion, Dylan Bostic wrestle, he appears to have made his return to OVW as a babyface (he used to be a heel known as “The Justin Bieber of Pro Wrestling” coming out with bubble gum pop/boy band entrance music).

This match starts off with some exciting headlock exchanges, and no I’m not being sarcastic. These two actually worked some nice headlocks in front of a crowd that sounds hotter than any other OVW crowd I’ve had the pleasure of reviewing a show for. Dylan Bostic breaks out of a headlock with two excellent drop kicks and a really impressive spinning heel kick. Bostic then takes a nice suicide dive to the outside on top of Body Guy. Back in the ring, Bostic misses a spinning cross body off of the second rope as Body Guy moves out of the way. Bostic twists his knee on his way down from this and Body Guy takes advantage by slapping on his signature Figure Four Leg lock forcing the referee to stop the match. Bostic was really impressive in this match; I hope he appears on OVW TV in the weeks to come. ***

Six Man Tag Team Match – Dapper Dan, Elvis Pridemoore, and SK Eveslage vs. Jonathon Ramser and The Wild Boyz (Eddie Diamond and Bud Dwight): The commentators mention that Eveslage put his team together with rookie standout Dapper Dan and Elvis Pridemoore who wrestled as a babyface last week on OVW TV, but is wrestling on the heel team here.

The heels begin the early part of the match working over Eddie Diamond until Diamond finally gets the hot tag into “Ram Jam” Jonathon Ramser. Ramser takes SK down with the Three Amigo Vertical Suplexes. This is when action gets out of hand with all six men brawling in and out of the ring.

Dapper Dan comes in and hits Ramser with his signature German Suplex to set up the legal man, Eveslage to finish off Ramser with a Rude Awakening Neck Breaker. **1/4

Eveslage celebrates after the match and is surprised by The Assassin coming into the ring. The Assassin is a very tall/large man who wears a black and white mask, black sweater over the top of a white collared shirt and tie. Commentator Gilbert Corsey alludes to knowing is under the mask, but this review has no idea who he is as I’ve only been watching OVW for the last 5-6 weeks.

This match was better than a WWE Divas match, but not as good as a NXT Divas match. Jessie Bell outsmarts the less experienced Rebel with a roll up for the win. *1/2

Book on a Pole Match – Ryan Howe vs. Stuart Miles w/ The Congregation (Altar Boy and The Apostle): This match was advertised on the last episode of OVW TV as having Howe’s stolen guitar hanging on a pole and Miles’ stolen book hanging on a pole on the opposite side of the ring. It appears as if just the “Pastor of Disaster” Stuart Miles’ book is hanging and the winner takes all, the book and the guitar. The winner of the match is the wrestler that can climb the pull and remove the book from the pole.

Ryan Howe who has improved a great deal since appearing on the most recent season of WWE Tough Enough hits an impressive Moonsault on Miles and then the Congregation gets involved as Howe goes to grab the book. The referee kicks the Congregation out from ringside and Miles is busy arguing with the referee as Howe climbs the pole and retrieves the book. Howe celebrates after the match by ripping Miles’ “Good Book” to shreds and playing the electric guitar better than Hiroshi Tanahashi plays the air guitar in NJPW.

Winner is the Senior Official of OVW – Josh Ashcraft vs. Timmy Danger: Ashcraft is the current senior official of OVW and is a heel referee. This is a non-wrestler match and in any non-wrestling match the high bar to clear will always be Cornette vs. Heyman ’89.

Danger comes out wearing full wrestling gear whereas Ashcraft is wearing a black hoodie and khaki shorts. This match only lasted a few minutes, and the most entertaining parts were the moments when these two weren’t trying to wrestle an actual match. Non-wrestlers shouldn’t wrestle these kinds of matches like actual wrestlers. Again, look at how Cornette and Heyman worked their match in 1989. Danger wins with DDT. *1/2

OVW Television Championship Match – Michael Hayes vs. Chris Silvio © w/ Mary Jane and The Security: These are the two most complete wrestlers in OVW from an in-ring, gimmick, and overall presentation standpoint. They wrestled a good match last week on OVW TV, but I was critical in my review wanting the match to quicken the pace a little bit.

The referee immediately kicks “The Security” aka Silvio’s body guard out from ringside. Silvio immediately attack Hayes and they brawl to the outside. Back in the ring, just as the referee officially rings the bell to start the match Silvio hits Hayes with a Psychedelic Super Punch. Hayes the Iraq War Veteran tries to fight his way to his feet and Silvio hits Hayes with another Super Punch. Silvio heels it up by picking at his prey as opposed to going for the immediate cover for a seeming win. Silvio hits Hayes with an impressive Flying Elbow Drop, but allowed Hayes too much time to recover and Hayes kicks out at two. Silvio goes for another flying elbow and instead meets the foot of Hayes prosthetic foot and Hayes gets up to hit Silvio with a Code Breaker for the win. This match was a whole lot better than their TV match last week. The pace was picked up and the only complaint I have this time is these two weren’t given enough time. This match could have been really good with 10 more minutes to expand upon the work they were doing, but these two did the best they could with the time they were given. New Champion. ***

OVW Heavyweight Champion – Melvin Maximus vs. Cliff Compton ©: “Mister Marvelous” vs. “Mr. 1859”. Melvin Maximus is an older looking wrestler with an incredible physique and that is where his appeal ends. Maximus has been boring and stale to watch as he makes the Warlord look like a great worker and his finisher is the heat sucking Bear Hug. Compton is a guy who is incredibly entertaining on the microphone, commentary, or as a guest on podcasts. And that is where his appeal ends. I have been largely critical of OVW’s main event scene with their undercard being the shining point in their product.

Early in the match Compton hits Maximus with a signature Spear for a two count and then Maximus traps Compton in a Bear Hug. Compton manages to roll out of the ring and as Maximus tries to get Compton back into the ring the referee counts to ten thus counting out both men. This lends itself to a rematch at the next Saturday Night Special. Ugh. I would really like to see Compton wrestle someone who might make him look better in the ring than Maximus, because I really want to like Compton. Compton sells the Bear Hug in the ring as if he is down for the count, as he lays on the mat writhing in pain further selling the fact that Maximus could have won this match had it not been for the count out as Maximus sells frustration as he walks to the back. ¼*

These teams match up really well together as they both have a more athletic wrestler (Jonze and Terrez) and a power wrestler (Locker and Mexicutioner). Terrez shows off some athleticism early in the match with Jonze and then each man tags in their powerful teammates as Corsey delivers the line “This is like a cement block meeting a brick wall”. TerreMex gains the advantage when Mexicutioner hits Locker with a Flying Shoulder Block and tags in Terrez. This is short lived as The War Machine regains the advantage and exchange tags while isolating Terrez in their half of the ring working Terrez over.

Trailer Park Trash walks out to ringside staring a hole through Titus as Titus retreats to the back and Eric Locker follows him. Back in the ring Jonze gets hit with a spear from the newly tagged in Mexicutioner and Mexicutioner gets the pin and three count. New champions. **1/2

This was the first OVW “Saturday Night Special” that I have watched and it was an enjoyable 70 minutes of wrestling. OVW’s product is still highlighted by an impressive undercard lead by Michael Hayes and Chris Silvio. The main event scene with Maximus and Compton leading the fray could use some fresh faces that are “better workers” in the ring. OVW’s TV title feels almost like WWE’s Intercontinental Championship circa ’87-’94 when it was used at the “worker’s title”, the title that had the better in-ring matches. It would also have been nice to make the SNS a solid two hours to give it a special feel separate from their weekly TV show. At 70 minutes with the same commercials at their TV shows this felt like a 10 minute longer episode of OVW TV with more title matches. Make it two hours, give the matches more time (like tonight the TV title match could have been 10 minutes longer), cut out the commercials (I would pay more than 99 cents for this event sans commercials), and maybe try to put together some recap videos or something before the matches,

If you have 70 minutes to kill and want to see what’s going on in OVW then I would recommend watching this. It’s not necessarily “must see”, but it’s a good pro wrestling show with some little gems here and there. That’s all for this review. I will be back in the next couple of days with OVW TV episode 794. Follow me on Twitter @LuchaNerd. 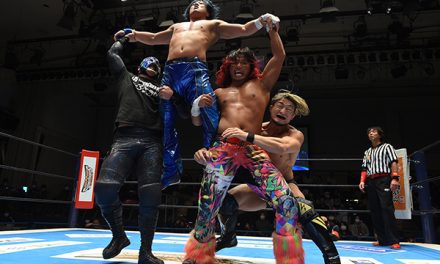