We kick off the show immediately with Dean Ambrose making his way to the ring. While his music is playing we get a recap of Mick Foley coming out this past Monday on Raw to warn Rollins and Ambrose of their impending doom Sunday night when they step foot inside of the Hell in a Cell.

Ambrose gets on the mic and says the laws of physics don’t apply to him. If you knock him down he gets back up. You hit him with a steel chair and he gets back up. The reason he keeps getting back up is because of the hardcore legend, Mick Foley. But, deep down Foley was always a good guy, and Ambrose isn’t a good guy. Ambrose doesn’t have a family at home to live for. Ambrose goes on to tell Rollins that he is going to leave Rollins knee deep in his own personal Hell on Sunday.

Ambrose tells Rollins that when that Cell drops on Sunday he won’t be able to talk his wait out of anything. Ambrose says he doesn’t care if it is his last match; the only thing that matters is getting ahold of Rollins.

Sheamus joins the commentary table while Los Matadores get their jobber entrance already in the ring as we join them after a commercial break.

The Miz and Damien Mizdow vs. Los Matadores (Diego and Fernando) w/ El Torito: If you read the previews/predictions for Hell in a Cell then you read my newfound disdain for everything Mizdow. Damien Sandow was a solid gimmick/wrestler when he was inside the Lanny Poffo/Genius gimmick. Ever since he started this comedy act he is horrendous. And the Mizdow gimmick is stupid. If you walk onto a movie set the stunt double is not mimicking every action the actor does. In fact it’s quite the opposite. The stunt double does everything the actor does not do, thus making his shtick completely idiotic. Get Damien Sandow off my TV.

Los Matadores get a decent amount of offense in this match, but not enough. Their tag team is one that should be elevated more in a promotion that has a very weak tag team division. The Miz puts the figure four leg lock on one of the Matadores while Mizdow mimics him on the outside of the ring doing the same thing to the other matador for the win. 1/2*

Post-match Miz and Mizdow taunt Sheamus from inside the ring and Sheamus yells to them that he is not a matador he is the Celtic Warrior.

Gold and Stardust are in the back starting to cut their usual promo when Bo Dallas interrupts and Goldust screams at him “What are you doing in here?!” Bo tells them they can win their 6 man tag team match tonight if they “Bo-Lieve!”

Alicia Fox w/ Paige vs. AJ Lee: AJ gets quite the pop coming out to the ring and starts the match off with some “AJ! AJ! AJ!” chants. Odd for being in Wichita, Kansas, not normally known as a “smart” or “hot” wrestling town.

Paige is on the outside of the ring screaming orders to Alicia Fox to body slam AJ. And Paige screams at AJ how much she hates her. Paige jumps on the apron and AJ shoves Alicia Fox into Paige and then follows up with a Schoolboy for the win. *

We get a backstage interview from earlier in the day that Michael Cole conducted with The Big Show. Big Show talks about how Rusev tried to pull down Old Glory and at that time a soldier was passionate and defended what just isn’t cloth and fabric. (I suppose the Russian flag is just fabric and cloth).

Cole calls Show out on this asking him to compare Show pulling down the Russian flag. Show apologizes and mentions that he has a lot of friends that are Russian. Show says he was trying to show disrespect to Lana and Rusev not the rest of the Russian people. Show then talks about how the service men and women are his heroes.

Cole then shows Show a clip of Big Show’s idol, Hulk Hogan, talking about the Big Show/Rusev match on the WWE Network. (According to the on screen graphic this is a “WWE Network Exclusive”. Does the WWE know what exclusive means? I’m watching Smackdown on Hulu right now, meaning I saw this clip not on the WWE Network. Ugh.)

Show tells Cole that he cannot keep his emotions under control at Hell in a Cell. Show says he will knock Rusev’s ass out and pin him 1….2….3.

This was a pretty good segment of Big Show, but I wish the WWE would make a pact to never have Big Show cry on TV again. Just because he can cry on command doesn’t mean he should. He is the big giant man in the WWE, what better way to take the heat out of that then to have him cry. He wrestles like a super-heavyweight giant, but cuts promos and acts like a 5’8” sympathetic babyface. Doesn’t make sense.

Intercontinental Championship Match – Cesaro vs. Dolph Ziggler: We start off with the big match introductions from Brandi Rhodes. This match starts off with some fast paced and furious chain wrestling until Cesaro throws Ziggler into the turnbuckle post sending Ziggler to the floor outside the ring for a heat sucking commercial break. WWE could really freshen up their product by cutting out mid-match commercial breaks. It takes the heat out of everything. It’s hard to imagine the wrestlers being able to keep a good momentum when they have to worry about not being on TV for a few minutes.

This match was filled with reversals, counters, and wonderful story telling. The match finishes with Ziggler going for a superkick, Cesaro countering and going for a European uppercut, Ziggler countering into a Zig-Zag for the win. *** This match could have been much better with more time and no commercial break.

Natalya, Naomi, and Brie Bella vs. Cameron, Summer Rae, and Nikki Bella: Wichita, Kansas must be at hotbed for women’s wrestling. Shine and Shimmer should really look into running shows here. The two biggest pops/chants on this show were for AJ Lee and Brie Bella.

Anyways, this match sucked and was like most every women’s tag team Diva’s match. Nikki gets the win with her Torture Rack Drop thing. Brie is really showing improvement in the ring, she is at least trying to put together better matches.

We then get a Hell in a Cell “by the numbers” video package. WWE should really do more packages like this.

The Uso’s (Jimmy and Jey Uso) and Mark Henry vs. Bo Dallas, Gold and Stardust: Goldust works over Jey Uso for the beginning of the match until they both knock each other down and get hot tags into partners Henry and Dallas. This leads to The Uso’s flying all of the ring on the Rhodes brothers as the action gets out of hand. Dallas cowers in the corner as he is left in the ring by himself with Henry. Stardust appears out of nowhere jumping off of the top rope into Henry’s arms for a World’s Strongest Slam. Dallas then out of nowhere hits a slow, pathetic, and unbelievable Bo-Dog for the win. *

Dolph Ziggler is in the back with Renee Young. Cesaro interrupts the interview and tells Ziggler that he got lucky tonight. Cesaro declares the Intercontinental Championship the most prestigious title in the WWE. Ziggler says it’s only prestigious, because he is holding it. Cesaro then challenges Ziggler to settle this once and for all in a 2 out of 3 Falls match at Hell in a Cell. Ziggler accepts. In a 2 out of 3 falls match between these two with no commercial breaks to ruin the match, these guys can easily put together a ****+ match.

Seth Rollins makes his way to the ring with the PG Stooges, Mercury and Noble. Seth is in the ring with two tables toppled with weapons that not even a crappy CZW death match would utilize.

Rollins tells Ambrose that he taught Dean everything he knows. Seth Rollins says that the only rule in Hell in a Cell is that there are no rules. Rollins then tells Ambrose what he is going to do to him. Rollins is going to handcuff Ambrose to avoid him hiding in gift boxes. Rollins is going to use a screwdriver to deflate Ambrose’s ego. Rollins then asks Ambrose if he remembers this, as he is holding a steel chair. Rollins then calls Ambrose out to settle this right here right now. Ambrose no shows and Rollins says he doesn’t blame Ambrose for not coming out. Rollins says the future is bright for him, but it is a long ride straight to Hell for Ambrose. The PG Stooges are standing on the ramp side of the ring so naturally Ambrose enters the ring on the announcer’s side to take out Rollins with a kendo stick. The PG Stooges tackle Ambrose and begin to beat him down with stomps. Rollins gets away and Ambrose nails Mercury with double armed DDT which Michael Cole calls Dirty Deeds. Did the move change or is Michael Cole oblivious to the names of wrestling moves. Most likely the latter. Ambrose elbow drops Mercury through a table as Rollins looks on from the top of the ramp. Ambrose then puts Noble through a table much to the chagrin of Rollins. We close out the show with Ambrose and Rollins staring each other down.

This episode of Smackdown was better than most recent ones. The Ambrose/Rollins feud gains some heat, but is still hindered by the use of props as a joke and Hell in a Cell could be a better show than anyone expects it to be. Follow me on Twitter @LuchaNerd 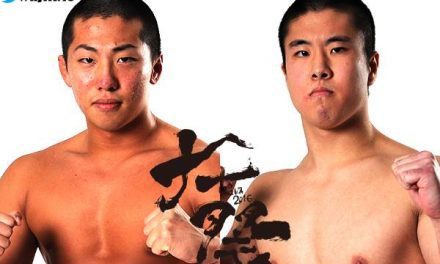