The bad news about this week’s episode of “Total Divas” is that it’s all about how serious relationships make people boring and terrible. The good news is it’s twice as long as usual!

That’s right — a double-header, and it’s all about the kinds of problems that come up in normal relationships, like when you fail miserably at marriage counseling, or when your homebody husband makes your sister not like hanging out with you anymore, or when your boyfriend doesn’t tell you about his nude scene. Let’s check in with our couples:

Ariane/Cameron is back from her self-imposed remedial trip to NXT. Seriously, did anyone notice she was gone in real life? Like, if you don’t watch “Total Divas” and you don’t follow the developmental roster, did you even miss her?

Nikki Bella missed her, though; Ariane’s trip to Tampa “showed me her true passion for the business, and that’s a girl that I want to get in the ring with.” She doesn’t specify whether she would actually want to wrestle in the ring with Ariane or maybe just hang out there and talk about lip gloss.

Ariane and her boyfriend Vinnie have been arguing about their too-small apartment. When the Divas and their menfolk jet off to Curaçao for a coed pretend bachelorette party for Eva Marie (who is already married), Vinnie announces to the group that he and Ariane are going to buy a house, which leads to them arguing about it in front of everyone and then away from everyone. It resolves in yet another heart-to-heart during which Ariane realizes that she takes Vinnie for granted. (If you haven’t watched “Total Divas,” this happens about twice per season.) And then Ariane announces to the group that she’d like to hire Nikki as her real estate agent. As far as we know, Nikki (who got her real estate license in a prior season) has sold exactly one property. To John Cena. Who bought it for her. So this can only turn out great.

Things appear to be looking up for the Neidhart-Kidds when TJ announces in Curaçao that he has a special surprise planned for Nattie. She assumes it will be a dreamy island tete-a-tete, so naturally TJ and Nattie’s romantic excursion turns out to be an outing to some kind of ostrich petting zoo.

“TJ was trying to do something romantic and we’re surrounded by bird s–t,” Nattie says. And while she tells him “it was the thought that counted,” she sounds about as believable as Lana’s Russian accent. (Highlights of the ostrich outing other than Nattie’s pout: An ostrich that attempts to bite her in the head and another bird that “kind of looks like Summer.”)

Back home, Nattie gets together with Trinity/Naomi, who dishes up some straight talk.

“Do you think you treat your relationship with as much passion as you do the WWE?” Trin asks. Then she suggests therapy. Turns out they have been to sex therapy (a bad experience that “kind of scarred TJ”) but not marriage counseling.

Nattie and TJ go to a marriage counselor who refers to herself as “Dr. Gina” and is a dead ringer for Idina Menzel. During the course of the session, TJ reveals that his down time has him thinking he’s pretty OK with not being on the road, and Nattie says she feels completely alone and wants him on the road with her. Nattie wants to go back for another session, but TJ doesn’t see the point of going back to therapy — if one session didn’t fix anything, he reasons, what will more do?

Later, after a WWE event in New York, Nattie goes out to dinner with Darren Young and when they encounter a paparazzo who asks about TJ, Nattie volunteers that they’re “not getting divorced yet!” Not at all awkward. Especially not when people start asking TJ about it on Twitter. I think we can expect “Total Divas” will circle back on this next week.

First and most importantly: This week John Cena learns that “hangry” is a word. Also, John Cena has SO MUCH DOM PERIGNON IN HIS WINE CELLAR.

Moving on: John and Nikki go to the premiere for “Confessions of a Womanizer,” in which she and Brie have roles. Afterward, John asks Nikki if she would ever consider doing a nude scene.

“Like ‘Game of Thrones’ style?” Nikki asks. No, she probably would not.

As it turns out, this is John Cena’s sideways manner of working up to a later conversation about how his new movie involves a “hysterical sex scene.” 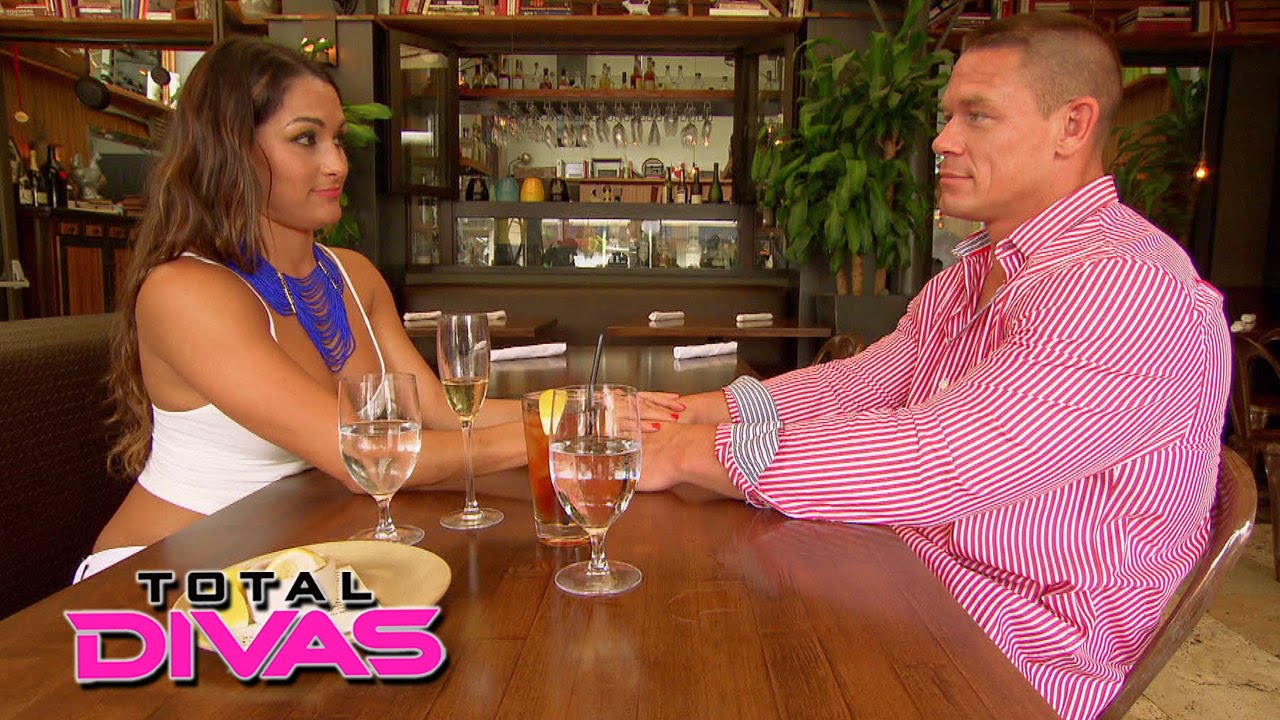 Nikki reacts as rationally and even-temperedly as we have come to expect.

The result of the blowup is perhaps one of the most emotional and equally-matched arguments we have ever seen between the Fearless Twin and The Champ. Cena even gets a little passive-aggressive:

Nikki seeks solace with her family, and instead she gets real talk. Mama Bella shrugs that it “comes with the business,” while brother JJ asks, “Wait, haven’t you kissed people in WWE? That you didn’t want to kiss?” (She has, as a matter of fact; the man to whom her sister is now married.)

Back at work, Eva and Nattie are emphatic that they wouldn’t be OK with their men doing sex scenes, which leaves Nikki feeling validated. Because Grandma Nattie the marriage counseling dropout and All Red Everything with the men’s magazine save-the-dates for a wedding to her already-married-to-her husband are the absolute authorities on healthy relationships. And then Brie pipes up that perhaps being abandoned by her father at age 15 and then having a string of failed relationships could be leaving Nikki a little gun shy about seeing her man get down with another woman in front of strangers.

“I’ve been burned in weird ways that can leave you damaged,” Nikki admits. Which leads to one of “Total Divas”’ signature serious-conversation restaurant scenes. (No one on this show ever has serious conversations without a cocktail and some small plates.) Shocker: John and Nikki make up.

Neither Daniel Bryan Danielson nor John Cena can make it to Curaçao, so the Bellas go as one another’s dates. Nikki wants to shop and drink, but first she has to pull Brie away from her online furniture shopping and FaceTime convos with Bryan D. Bryan, who has stern words for his sister-in-law when he learns Brie’s luggage has been lost and she’ll need to borrow clothes from Nikki: “Nicole, do not dress my wife up like a hoochie.”

Not possible, since Nikki’s entire wardrobe is pretty much comprised of Herve Leger bandage dresses. Although she has to help Brie out a little bit when it comes to filling out space usually reserved for Nikki’s surgically-enhanced assets.

“Don’t tell Bryan,” Nikki says as she stuffs her sister’s top with tissues. I assume so he can be surprised when he sees it on national television.

From the moment the plane lands in Curaçao, Nikki and the rest of the group are pressuring Brie to let loose and get into “Brie Mode,” which hasn’t been seen much since she settled down and became a respectable married lady wed to a fellow whose attitude toward alcohol makes CM Punk seem like a marshmallow.

After days of pestering, Brie finally loses patience with Nikki over Brie Mode:

“Well, you ain’t gonna see it because I don’t want to be as obnoxious as you.” Nikki comes back with an “Oh hell no” and things go downhill from there.

The next morning, Nikki denies she was pressuring Brie to drink (because apparently she has forgotten the whole thing is on video), but Brie explains that they’re in different places now — she’s “the housewife,” and Nikki is “the working woman.” They make up and Brie makes Nikki do a “gross hug.”

Rosa and Summer Rae have been bonding over feeling like outcasts. They were, in case you were wondering, not invited to Curaçao.

“Those two should bond maybe on some very remote island somewhere and forget how to get back,” TJ says at one point.

On the road, Rosa confesses to Nattie that after more than a year alone, she’s “on the hunt” for a guy — but it can’t be just any guy. She doesn’t want to hook up, give her heart away, have it broken and risk a relapse. So she doesn’t even want to kiss. Nattie is not optimistic that this dating strategy will work out for poor Ro:

“Men in their 30s aren’t going to be like ‘Let’s go play Monopoly.’” Also, she adds, the guys Rosa picks are “total meatheads.”

The total meathead we meet in this episode is Gary Barnidge, a tight end for the Cleveland Browns. They go on a lunch date, during which Rosa dazzles him with witty conversation (“Oh my god, I love chips.”). Later, she invites him backstage and introduces him to Summer Rae.

Summer chats up Gary because they have so much in common (Summer “used to play football” in the Legends Football League) and because she is the villain.

Then Rosa goes on another date with Gary, who tells her he doesn’t drink. So she comes clean with him about rehab. And then she feels so liberated she tells him she’s looking for a soulmate, not a good time. She wants something meaningful. She wants a guy who wants something long-term:

“I want someone that I’m gonna spend the rest of my life with.”

At which point Gary literally asks for the check.

And then Summer goes out with Gary because she hasn’t done anything evil yet this season. I wonder if Rosa will find out in the next episode? That could lead to some uncomfortable interactions, couldn’t it?

Upon learning her brother-in-law won’t be going to Curaçao: “Bryan can’t go.” (Shrugs.) “This is my sad face.”

“Because your brain works very slow.” 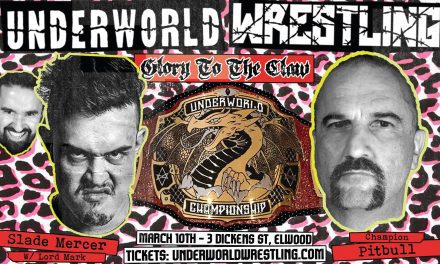