The show opens with Tyler Breeze, his incredible theme music and extremely awkward sexual tension between Jason Albert and Renee Young. Unfortunately, everything hits a snag as Mojo Rawley comes down to literally no reaction whatsoever. I’m starting to feel sorry for the guy now. If you’ll remember two weeks ago, Mojo got destroyed by Tyler Breeze after getting squashed by Bull Dempsey… yeah, it’s time to Pray for Mojo.

Mojo Rawley vs. Tyler Breeze: Tyler starts working on Mojo’s injured (in the attack two weeks ago) shoulder. Fujiwara armbar in the middle of the ring and Mojo taps. This was, quick and the crowd couldn’t give two shits. Tyler had some nice fire here and was looking a lot more serious than usual.  Mojo’s squashes continue and he really doesn’t look long for this company. NR

Big Cass and Enzo are backstage talking to William Regal. Enzo asks if Regal will take a look at Carmella and give her a tryout. Regal walks out to the Performance Center, sees Carmella in the ring “making that chick tap out.” Regal is impressed and tells Enzo to bring her next Thursday.

Viktor vs. Hideo Itami: Visible Bullet Club shirt on the hard-cam side. The two start out with the two exchanging a series of strikes but Viktor quickly neutralizes Hideo with a huge clothesline and chop. The crowd is 100% dead here, so much so the announcers discuss the old “stunned silence” even going as far as saying “you can hear a pin drop.”

Disappointing to hear NXT as cold on this match as it’s been fairly good so far. My theory is nobody can possibly care about The Ascension anymore but we’ll see how that bears out as this feud continues. We were also tweeted some information that the crowd was muted because they were yelling racist things at Itami. I can’t confirm that because the announcers make mention of the quiet crowd. There were reports of Itami receiving chants directed towards him at recent NXT house shows:

Let’s hope in 2014, we don’t have crowds chanting Jackie fucking Chan at an Asian wrestling but either way, very odd match and crowd here.

Hideo hits a springboard dropkick and starts grabbing the momentum. I’m not sure what happened on that dropkick but Itami looks completely out of it, he misses a dropkick in the corner by a few inches, he’s wobbly on his way to top and has some awkward timing avoiding a clothesline. The announcers say he’s just feeling the effects from last week’s beat down but it genuinely looks like he’s out on his feet. Anyway, as Itami is climbing to the top, Konnor is seen on the stage with beaten and battered Funaki.

Itami is barely able to bounce off the ropes (again, he looks totally gone) and hits an okay looking dropkick for the win. I’ll put it this way, either Itami is the greatest concussion seller ever or he suffered one on that springboard dropkick. This was not very good and suffered due to some general awkwardness between the two and a dead crowd. *1/4

Post-match, Konnor runs down and The Ascension starts beating down on Itami. They tie him up in the ropes and “FORMER HARDCORE CHAMPION” (no, seriously, that’s how he was introduced) Funaki runs and to aid his buddy. He eats a Fall of Man for his troubles. Ouch.

Back from commercial, we see a WWE.com exclusive of Funaki being put on a stretcher.

The Vaudevillains vs. Enzo Amore & Colin Cassady: The Vaudevillains new music is so awful, I get if they are going to be super heels (it’s very ominous) but they played total babyfaces last week. Something tells me they won’t be a babyface tonight against Enzo and Big Cass.  Typical pre-match promo from Enzo, realest guy in da room, etc. Cassady makes a Hey Arnold! reference that will forever make him my favorite wrestling of all-time. Quick action to start us off. Cassady has some nice offense including an awesome big boot on Gotch. Cassady is looking good and really is on the cusp of being something special. I eagerly anticipate his days as a singles worker with Enzo as the mouthpiece. Weird sequence where English sends Cassady out of the ring, Enzore is slow to react and The Vaudevillains hit the Old Fashioned and it’s over. Huge win for Vaudevillains here, not much of a match though. *1/2

Becky Lynch vs. Sasha Banks: Well, this should be a lot of fun. These are two of the best women on the roster and two noted wrestling nerds. Becky is looking great and is in tremendous shape, even Renee Young says “WOW BECKY IS LOOKING HOT.” Becky starts off with an armbar, Sasha reverses it and goes for a pin attempt but Lynch bridges out of it. Impressive! Nice back and forth with Sasha working Becky’s arms. Clothesline attempt by Banks, reversed into a schoolboy by Becky. Becky with a nice looking European uppercut, clothesline and a leg drop. Flying clothesline by Sasha to yank the momentum, back breaking, bridged into a Bank Statement (crossface) and it’s over. This was a sprint but an impressive one. Can’t wait to see some longer matches between these two. **1/2

Sami Zayn vs. Titus O’Neil: Good psychology starting us off here with Titus playing the monster to Zayn. Sami with a nice flurry of offense but Titus grounds him and starts beating him down in the corner. Knee lifts, clubs, chokes in the corner. Zayn breaks out of the corner with some chops but he eats a huge body slam from Zayn for a two count. We’ve now moved onto the bear hug. Dangerous to work a match this slow and methodical in 2014, but it’s working well so far. The crowd is getting behind Zayn’s comeback who finally breaks free with a headbutt. Zayn gets O’Neil on the outside and hits a beautiful Tope con Hilo. Flying crossbody from Zayn but O’Neil kicks out at two. Zayn goes for the Tornado DDT but he’s cut off by O’Neil who turns it into a sit-up powerbomb and it’s over! Titus’ offense was very, very methodical here. If you don’t like that style, you’re not going to like this match. I’m not usually one to enjoy it but I thought the interplay of the high-flyer in Zayn and the big main roster guy was good. It wasn’t great but I enjoyed it more than I thought I would. **1/2

Post-match, O’Neil pulls Zayn onto the ring apron and goes to the top. No clue what he was going to do here but Adrian Neville runs down to pull Zayn away and protect him from the big bad Titus as we sign off.

NXT has had a solid run of above-average shows, this one was not one of them. The squashes were kept short and told the right story but the main event (Zayn and O’Neil) was just okay and Itami vs. Viktor was no good at all. Lynch/Banks was definitely the highlight and a match you should try to see but overall, a below average episode of NXT. 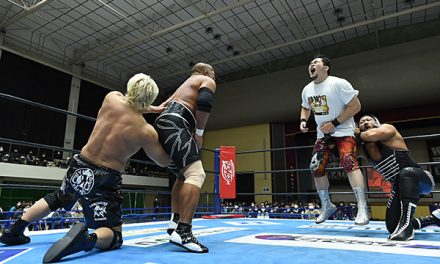 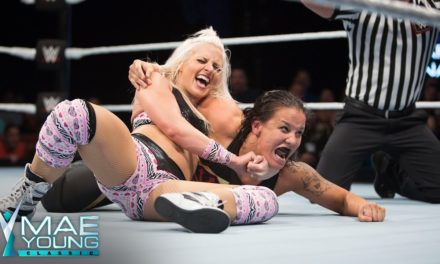 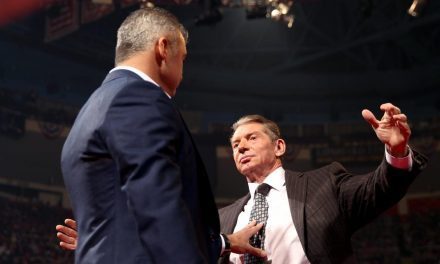