Recap of the Ambrose and Rollins comedy hour from the past Monday. Miraculously, due to WWE’s artistic wizardry, this video package looks serious and really adds some fuel to the fire of this Ambrose, Rollins, Cena, Authority, Orton storyline. (By the way, this past Raw was horrific. It seemed like every single segment had a horrendous attempt at comedy.)

The show kicks off with John Cena making his way to the ring! Smackdown always has a special feel to it when the face of the company shows up. John Cena says to him this city is the birthplace of Pabst Blue Ribbon. I always wondered what kind of brew Cena preferred.

Cena then talks about how Ambrose and him have a common desire to gain revenge on Seth Rollins. Cena explains that Ambrose is ticked off because his face got smashed in by cinder blocks. Cena then states his reasoning for wanting to fight Rollins. John Cena cuts an excellent promo here. A promo that could’ve been used on Raw this past week. Not to say, that Smackdown viewers don’t appreciate these excellent promos on lowly watched Smackdown, but until WWE makes Smackdown more important these promos are just getting lost on deaf ears and blind eyes. Maybe this is a baby step in the right direction….

Cena then calls Rollins out to the ring saying that he doesn’t want Seth’s MitB briefcase, he just wants to stick his foot where the sun don’t shine. To Cena’s chagrin, Ambrose comes out to the ring instead. Ambrose tells Cena not to get in his way of him trying to wipe the smug smile off Seth Rollins’ face. This is such good work from Ambrose and Cena. They aren’t playing to the crowd. They keep the emotion and the story between the two of them. Ambrose and Cena stare each other directly in the eye and talk this through. Ambrose’ presence in the ring, especially when he is in the ring with these main event superstars, these all-time greats, is wonderful.

Corporate Kane, Randy Orton, and Seth Rollins appear on the Titan Tron and try to add to the tension between Cena and Ambrose. Kane tells Cena that backstage he heard Ambrose saying Cena was an oversized action figure who couldn’t wrestle his way out of a box of cereal. Orton then tells Ambrose that he overheard Cena backstage saying that Ambrose is a lunatic and is going to end his own career with his out of control behavior. Kane then makes the main event tonight Cena and Ambrose vs. Kane and Randy Orton.

The Miz and Damien Mizdow vs. Dolph Ziggler and Sheamus: This match is a continuation of the Miz/Ziggler feud with some Sheamus flavoring. Sheamus gets beat down by the heels early on with some really good heat getting isolation in the corner work by the Mizzes. Dolph Ziggler gets the hot tag and comes in with a world of fire to pop the crowd big time. This is a good way the WWE can add rebuild Ziggler. Make Smackdown HIS show since he is the Intercontinental Champion and stick him in some tag matches that give him the hot tag. Overtime when fans see him take out heels out with the fire he showed here then they will continue to get behind the guy. Even give him the moniker of “Mr. Friday Night”. The match ends with Mizdow rolling Ziggler up with a hold of the tights; Ziggler kicks out and hits Mizdow with the Zig Zag for the win. **1/2

We get an airing of the Wyatt Family video package of Bray assumedly letting Luke Harper run loose from the group. Luke Harper’s “Peak-a-boo….You’re doomed!” at the end is brilliant. Luke Harper has the ability to go far for a big man in the WWE, but the better move would be to turn Bray babyface and have Harper take over the stable. This would put both in a main event spotlight.

Video recap of The Big Show’s feud with Rusev including Big Show’s disrespect of the Russian Flag. If the WWE was truly sorry for the actions of the Big Show then they would stop showing pictures, videos, and replays of this incident. Kind of talking out of both sides of your mouth if you ask me. 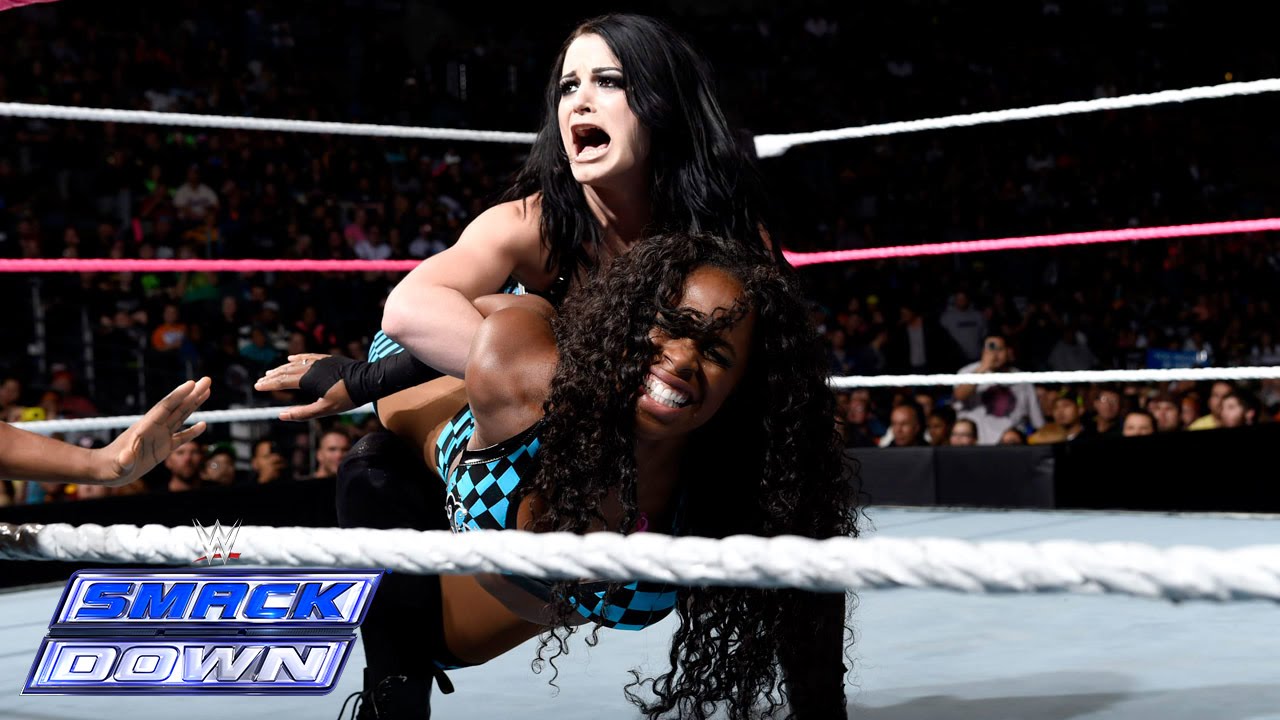 Paige w/ Alicia Fox vs. Naomi: Apparently the WWE thought the AJ Lee vs. Paige storyline needed a third Diva that has been portraying a psychotic character recently. Paige goes over this one.

The Big Show comes out wearing his Big and Tall three piece suit to apologize formally for ripping the Russian flag down. Ruse and Lana come with more fire, passion and fervor in their walk to the ring that it actually makes this silly story of Big Show tearing down the flag into a potentially interesting. Rusev gets on the mic and tells Big Show that he disrespected him and Lana and that like all other Americans, The Big Show sucks. The showdown between Rusev and Show actually looks to have some weight and fire to it heading into Monday Night Raw tomorrow night.

Slater Gator (Heath Slater and Titus O’Neil) w/ GatorSwoggle vs. The Uso’s (Jimmy and Jey Uso): It appears as if Slater Gator has sealed the deal of being an official team by receiving the new entrance music treatment. It sounds like Slater’s and O’Neil’s entrance themes mashed together with some signature barking from O’Neil. The Tron images are of cars with Slater and Gator’s faces on them, which is strange.

Within the first minute of this match The Bunny comes down and distracts Slater Gator. The Bunny leap frogs over GatorSwoggle causing GatorSwoggle to run face first into the ring post. The Uso’s then hit Slater Gator with a pair of superkicks. The Uso’s and the Bunny hit a simultaneous trifecta of Superfly Splashes for the win. Adam Rose then comes down to the ring to celebrate with the Uso’s, the Bunny, and the Exotic Express.

Renee Young is in the back with real life (rumored) boyfriend, Dean Ambrose. Renee asks Ambrose about John Cena. Ambrose says he has nothing to say to our about John Cena. Ambrose then talks about Seth Rollins and how he wants to embarrass him. Dean Ambrose says that there is nothing that will stand in his way to exacting revenge on Rollins for smashing his face into cinder blocks.

Cesaro vs. R-Truth: We get a recap of Cesaro getting screwed over last Friday night on Smackdown when Ziggler defeated him in their IC title match despite Cesaro’s hand being on the rope.

R-Truth eradicates his past mistake by asking the crowd “Where am I at?!” and then says “Milwaukee, Wisconsin! What’s up?!”

Cesaro makes quick work of R-Truth in this match that couldn’t have lasted more than two minutes. Cesaro defeats Truth with the Neutralizer.

Randy Orton and Corporate Kane vs. John Cena and Dean Ambrose: Interesting note that Randy Orton is the only one appearing in this match that has actual wrestling gear on. Cena and Ambrose control the first half of the match as if to prove they can work together and get along. After Ambrose makes his signature suicide dive to the outside atop of Orton and Kane both, we go to commercial. Once we get back from commercial the heels have control of the match as the hot Milwaukee crowd gives us a “Let’s Go Cena! Cena Sucks!” chant.

At one point Kane has a sleeper hold on Ambrose and we hear Orton from the apron yelling “choke the life out of him, Kane! Choke him!” And why did Daniel Bryan get fired in 2010?

As Ambrose is crawling to Cena to make the tag, Cena is reaching as far as he can ready to receive the hot tag until Seth Rollins makes his way down the ramp. Cena jumps off the apron and runs up the stage to fight Rollins as Kane and Orton double team Ambrose. Ambrose counters an RKO into the Dirty Deeds, but Orton shoves Ambrose away before he can pull him down for the Deeds. Orton shoves Ambrose face first into Kane’s boot and the referee calls for the bell! What? No five count for the partner entering the ring? Stupid. Why was this a DQ? Why didn’t they just have Kane bring a chair into the ring or something?

Cena then runs back down to the ring and looks on in disappointment as the Authority got the better of Ambrose and Cena.

This was a decent episode of Smackdown, which I feel like I type every time I watch this show, but ultimate Smackdown is always the show that isn’t bad, isn’t good. It’s just “there”. Smackdown, Main Event, and Superstars are never essential for a WWE fan to watch and that is a problem. I do really like the dynamic of Ambrose and Cena trying to get along, but both feuding over wanting to beat up the dastardly heel, Seth Rollins. It’s a good storyline for the WWE to hang their hat on while Lesnar takes a month off, (or maybe three months? Rumors are swirling.) 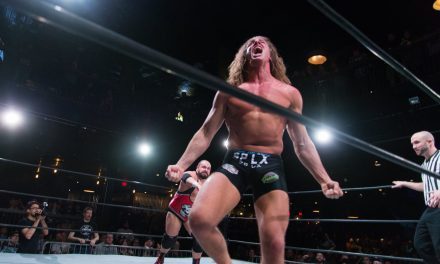 NWA Back for the Attack (March 21) Results & Review 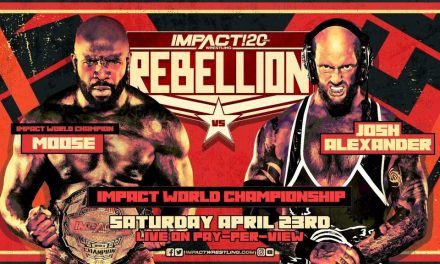