NXT Women’s Championship – Bayley vs. Charlotte (c): God, I’m looking forward to this. If you enjoy women’s wrestling on a larger scale and you aren’t watching NXT weekly, you’re missing out. I’m someone who doesn’t usually get enthralled with women’s wrestling but I’ve been in love with this division over the last few months. NXT does it right! Early back and forth to start off with Charlotte looking like the stronger of the two as Bayley tries to work quickness to her advantage. Bayley forces Charlotte to the outside with an armdrag and starts grabbing the momentum. Bayley starts working Charlotte’s arms with a nice armbar into a front facelock to ground the larger Charlotte. Bayley continues cutting off moves from Charlotte as the announcers talk about her progression since NXT Takeover II. Charlotte yanks the advantage and starts working on Bayley’s knee. Charlotte goes for the Figure Four and locks it in the middle of the ring. It’s not looking good for Bayley. Charlotte bridges up adding pressure to the move as Bayley continues to struggle. Bayley turns it over but Charlotte gets to the ropes immediately. Knee drop from Charlotte misses, Bayley with a back elbow in the corner, she tightens up the hair tie and hits a top rope elbow! Natural Selection and it’s over. Awww man… Charlotte wins. **1/4

This was really good but it needed a bit more time, this is a match that needs to main event an episode of NXT and go a good 15-20 minutes. You’ll create a star in Bayley with a win, either way, this was fun and I hope we get another rematch soon.

Post-match, Charlotte raises the hand of Bayley and they hug it out. I don’t have a problem with this as Charlotte is still not a face, just a heel who respects her opponent (that’s allowed, people!)

Viktor (of The Ascension) vs. Hideo Itami: I really don’t want to see The Ascension on my TV anymore but I get Itami, so I won’t complain. Hideo gets a nice pop on the way out. Itami gets into the ring but before the bell rings, The Ascension immediately starts double teaming Itami. Jason Albert says “Itami just started here at NXT, he has no friends.” That’s not very nice. The refs are trying to stop The Ascension by telling them to stop (which usually works well). Finally, The Ascension makes their way to the back and it doesn’t look like we’re getting a match here tonight. NR

Vignette with Carmella getting trained at the WWE Performance Center. Unfortunately for young Carmella, Enzo is the one training her. She eventually gets sick of him being a weirdo and dropkicks him out of the ring. She may already be better than Mr. Amore, who is still the best character ever (that may be hyperbole) but not the guy I’d want training me.

Baron Corbin vs.  Troy McClain: Corbin is super over already, most notably with the ladies who scream for him. This is McClain’s last match on NXT. Poor guy was released immediately following this beat-down. I made a Troy McClure joke on Twitter, we had some laughs. This lasted about 30 seconds, Corbin looked good again. NR

I remember Troy McClain from such NXT matches as losing to The Ascension late last year.

The Vaudevillains vs. Tye Dillinger & Jason Jordan: Okay, okay, okay… I need someone to explain to me why we had to change The Vaudevillains amazing theme music. Their new music is horrendous and boring, it’s not even like they changed styles too much, just decided to make a decidingly more boring theme. I can’t even… why? I guess the theme sounds more badass and makes them seem more heel-ish but it’s the freaking Vaudevillains, we were really concerned about them not being taken seriously? Anyway, good action to start off. Jason Jordan looked solid when he was in the ring, he’s still super green but he showed some nice fire here.. Aiden English tags in and immediately hits a really nice swinging neck breaker. Dillinger exposes his left knee and starts hitting some huge knee strikes to the side of English’s head. Simon Gotch comes in for the hot tag (guess they are heels in music alone!) Dillinger reverses it but hits a huge back elbow from Gotch. Airplane spin from Gotch to both men, tag to English who hits a second rope senton and it’s over! This wasn’t bad but it wasn’t great, just kind of there. Vaudevillains looked good, Jordan looked solid in the few minutes he was in and Tye Dillinger is a guy who wrestles on NXT sometimes. *3/4

Backstage Itami is with the trainers, icing his shoulder. Funaki checks on him, FUNAKI~! Look out Winter Park, FL IHOPS! Funaki says he has Itami’s back and not to worry.

NXT Championship – Tyson Kidd vs. Adrian Neville (c): Not even the best rematch on tonight’s show as Neville in a big match situation never seems to deliver. I’ve loved Kidd’s character work during this NXT run but in-ring he hasn’t been tremendously special. With that said, still looking forward to this match… The two exchange holds to start off with Neville locking in an arm bar as we see the back of Titus O’Neil’s head in the front row. Kidd with some huge strikes and some nice chops in the corner to Neville. Adrian turns the tables and starts chopping away at Tyson and follows up with a huge kick to the spine. Kidd rolls to the outside to avoid Neville but he’s met with a kick from the apron, Kidd is out and we’re going to commercial.

Back from commercial, a near-fall! What the hell? This is a taped show and we came back from commercial to a near-fall? Neville has Kidd groggy on the top rope, Neville composes himself and sets up for the superplex. Kidd fights out of it, goes for a sunset flip but Neville flips through it and hits Kidd with a hesitation/Shibata dropkick. Sit-down Powerbomb but Neville only gets TWO! Wow, nice sequence here. Neville tries for the Phoenix Splash but Kidd gets out of the way and locks in the Sharpshooter! Neville struggles for a few seconds but quickly makes his way to the ropes. Kidd teases a suicide dive but he’s met by a kick from the outside by Neville. Kidd’s down and as Neville makes his way back to the ring, he’s pulled to the mats by Titus in the front row. As Titus leans over to talk trash to Neville, Sami Zayn flies in with a Yakuza kick out of nowhere! Sami is encouraging Neville to get back into the ring and he slides in at 9.5. Kidd puts Neville on the top but Neville reverses it into a suplex and hits the Phoenix Splash — it’s over! ***

This was pretty damn good, it took a little while to get going but once it did, it told a great story and even more so the inclusion of Zayn and O’Neil made this feel like an even bigger deal. This is it for Kidd, who per William Regal last week, will not receive another NXT title shot as long as Neville is still champion. Post-match, JoJo announces to the crowd that Tyson Kidd “is out of NXT title shots” as the show faded to black. This was a cool touch. As far as Kidd, if he sticks around, perhaps you get a scenario where he costs Neville the title so he can get another shot or what we saw on Raw is his future, Nattie’s Total Divas’ lackey.

Fun episode of NXT with nothing even close to bad, the quick squashes were fine and every match had a level of intrigue involved with it including two huge rematches for the two top titles on the brand. Go out of your way to watch this one. 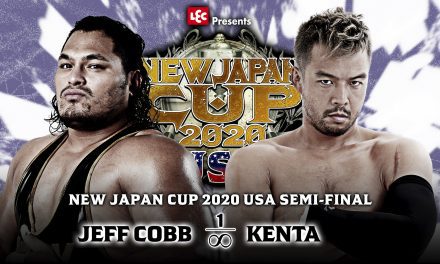