Mojo Rawley vs. Bull Dempsey: Mojo is obviously extra hyped after his appearance in the top 20 of the PWI500 (seriously, Mojo is #17, as if you needed more evidence to not pay attention to PWI anymore):

Rawley came out guns blazing attacking Bull on his way to the ring. Mojo on offense for the first minute or so with a series of really bad strikes but he’s met by a huge running splash. Dempsey to the top rope with a flying headbutt and it’s over. Okay, I’ve seen this match twice, I’m good forever. I’m not sure Mojo is long for NXT. 1/4*

Post-match Tyler Breeze enters the ringside area. Mojo bumps into him on his way to the back and Breeze tosses him into the ring post. Not a good night for Mr. Hype.

Tyler Breeze vs. Justin Gabriel: Gabriel has been a heel as of late but apparently he’s back to being a face. I guess he never fully turned, just guilty by association but anyway, Breeze is playing full heel here. He starts the match off with a series of kicks and strikes in the turnbuckle. Gabriel turns the tables and starts working over Breeze with some nice offense and repeated kicks to the back — three pin attempts but Breeze kicks out at one each time. Now Gabriel is playing heel and toying with Breeze, I’m guessing neither guy knows what they are supposed to do. Gabriel with a nice springboard back-kick but Breeze kicks out at two. Justin with a springboard moonsault but AGAIN Breeze kicks out at 2. 450 Splash attempt from Gabriel but Breeze avoids it, Supermodel Kick, Beauty Shot and it’s over! This could’ve been a lot better but it was a quick match with the story of Breeze as a babyface which was very odd. **

Backstage Natalya begs William Regal to give Tyson Kidd one more title rematch against Neville. Regal obliges but says if Kidd is unsuccessful he will not get another title shot as long as Neville is the champ.  Nattie seems nervous.

Alexa Bliss vs. Bayley: Announcers putting Bayley over huge and the crowd is way behind here. It’s amazing how simple storytelling can build a star in a promotion. Oh well! Bliss and Bayley with some nice back and forth to start. Bayley takes control driving Bliss into the corner. Alexa with a nice sunset flip and another pin attempt but only gets two. Beautiful headscissors from Alexa and wow, she’s turning into a real worker. Bayley smiles and gives Bliss a high-five, that was pretty awesome. Bliss looked legitimately happy by her sequence, how cute. Bayley follows this by trying to break Bliss’ arm with an armbar, into an armdrag and another armbar. Bayley to Back Suplex and it’s over! This was really good, but ladies looked great and the mutual respect angle was a nice touch. ***

Bayley calls out Charlotte post-match. Bayley says she’s let everyone down and she hasn’t been able to sleep since NXT Takeover. She wants a rematch against Charlotte, “give me another chance to beat you!” NXT crowd chants “One more match!” Charlotte says Bayley didn’t let her down, she, in fact, earned Charlotte’s respect. FACE TUR—not so fast. Charlotte says the rematch will be no different but she’ll be honored to face her next week: “See you next week, kid.” Then a big WOO from Charlotte, okay maybe she is turning face.

Oh yes! Another Big Cass, Enzo, Carmella backstage segment — Enzo says Carmella can’t get into the ring yet, she has to workout and train. Carmella comes back into frame wearing a sports bra and yoga shorts asking Enzo if she’s in shape enough? Enzo falls off the treadmill. You know, because she’s hot. Lanza may not be able to handle himself this week.

Enzo Amore vs. Marcus Louis: Louis comes down to the ring wearing the wig/wrestling headgear combo made famous by Kurt Angle. Enzo gets the pop of the night so far — it’s not hard to make stars, people! Better yet, he has an easy-to-repeat, crowd interacting promo which people, of course, eat up. Imagine if this guy could actually go in the ring? Anyway, Enzo’s a certified G, but you know that already. Marcus comes out of the gates quick with a series of clothesline attempts and some intense offense. Body slam by Marcus who is pulling his…erm…hair? Enzo pulls off the wig AND OH MY GOD BALD HEAD! Louis also shaved his eyebrows to look extra creepy. Marcus can’t handle himself, Enzo rolls him up and gets the win. This was awful, but, what do you expect with Enzo? Characters: five-stars. This match, not so much. *1/2

Tyson Kidd cuts an odd promo backstage, he’s not looking at the camera but nobody is interviewing him. This was some odd hybrid of the old promo style and the current “talk to someone backstage but don’t face each other” promo-style of today’s WWE. Anway, Kidd says he’s going to win the title next week.

NXT Tag Team Champions – Lucha Dragons vs. The Ascension: Quick offense from The Ascension, Conor with an early pin attempt but Sin Cara hits a beautiful arm drag off the top rope. Wheelbarrow senton double-team from Lucha Dragons — this was really cool. Crowd is absolutely dead here, I don’t think there’s any intrigue in The Ascension anymore but the Dragons have had trouble getting the crowd behind them as of late. Headscissors from Kalisto, sitting clothesline from Sin Cara but Viktor kicks out at two. Another tag to Kalisto, assisted moonsault from Kalisto but again only two. Lucha Dragons have had about 90% of the offense to this point. Viktor finally makes the …HOT TAG? and Conor gets Kalisto into a side headlock because #NXT. Viktor back in and HE puts Kalisto into a headlock, now we’re building to the hot tag from the Dragons. Conor back in, headlock, rinse, Ascension repeat. Viktor with a double axe handle but Kalisto kicks out at two. Some other miserably boring Ascension offense happened, this is the longest hot tag build I’ve ever seen. Maybe not the longest but the god damn most boring. Sin Cara FINALLY tagged in, Flying Crossobdy, springboard moonsault but he only gets two. Destroying any type of psychology this match once had, Sin Cara tags in Kalisto who is showing no effects from a 10 minute beatdown, thankfully he eats a back elbow for his trouble. HIDEO ITAMI! DISTRACTION FINISH! NXT IS RAW! Salina del Sol and Lucha Dragons retain. Conor runs up to attack Itami but he eats some kicks for his trouble. Match was not very good and I think I’ve seen enough of The Ascension forever. Lucha Dragons looked okay and hey, Itami looked strong again so I won’t complain too much. **

A decent episode of NXT highlighted by another great performance from Bayley and a potential breakout performance from Alexa Bliss. The main event left a lot to be desired for but, hey,  we have two big matches signed for next week! 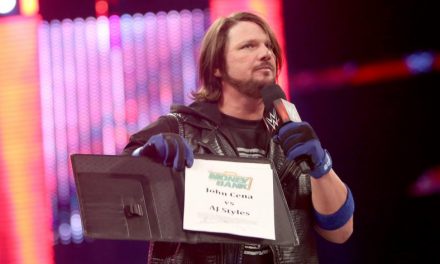