It’s the 100th episode of the WWE Network exclusive program, Main Event! Tonight, a big match between Rob Van Dam and Seth Rollins has been signed. Can “The Whole Dam Show” get a big win over the up and comer, or will “Mr. Money In The Bank” prove he’s a rising star for a reason.

Michael Cole is again on commentary, along with Byron Saxton performing color commentary. 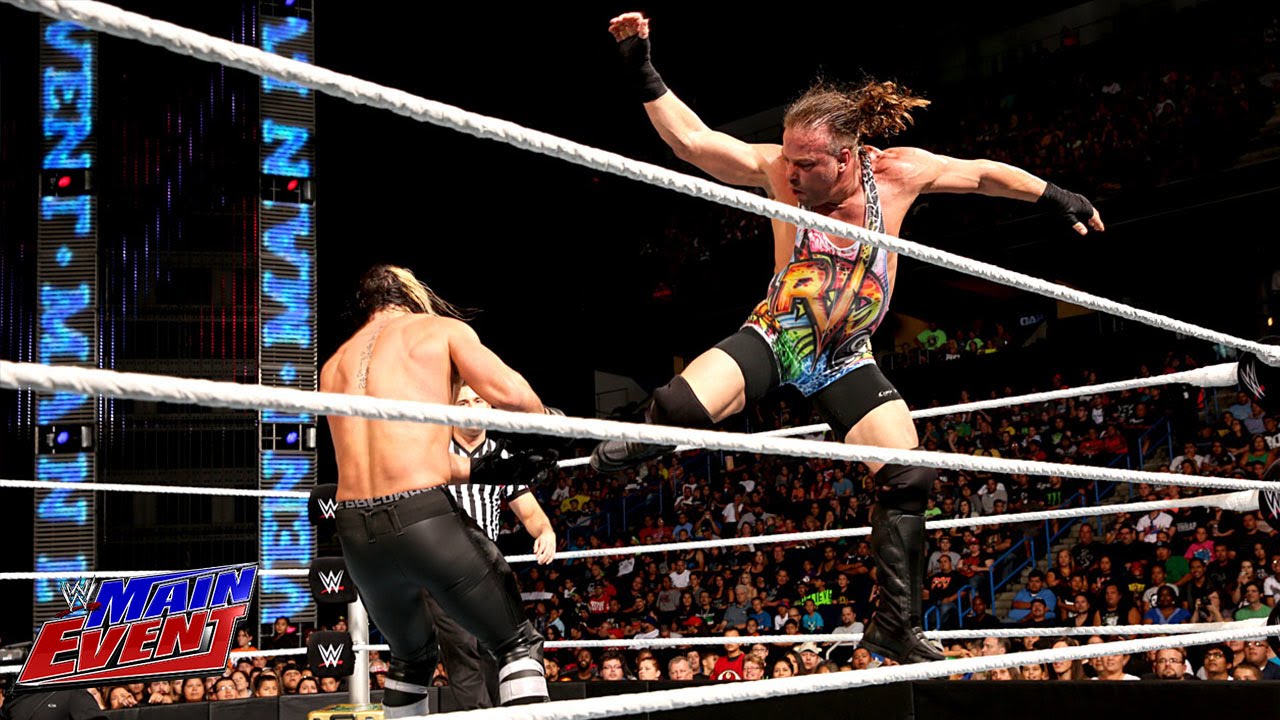 Rob Van Dam defeats Seth Rollins: RVD won the bout via count out. Yep, they gave a meaningless victory to Rob Van Dam. RVD was getting beaten up outside the ring by Rollins, complete with Rollins taunting the referee to keep counting him out. As Rod Zapata was getting closer to a ten count, RVD countered Seth and threw Rollins into the timekeeper’s area. RVD quickly got into the ring as the referee finished his count of ten. After the bout, as Rollins was arguing with the referee, RVD turned him around, delivered a punch and a kick, and Rollins had to backtrack up the ramp in complete shame. A bad week for Seth Rollins continued. *1/2

Backstage: Earlier in the night, Adam Rose was recruiting Curtis Axel to ride the Exotic Express. Axel called the ravers “rejects,” and a match is coming up later.

Adam Rose defeats Curtis Axel: Rose won via pinfall after connecting with the Party Foul. Nothing to this match, although Cole sold it as a big victory for Rose. The bunny was front and center amongst the ravers, and as we’d see on Raw the next week, he appears to be getting a bigger role in the Adam Rose act. *1/2

We got recap packages relating to John Cena’s rematch with Brock Lesnar.

Gold & Star Dust defeat Los Matadores: Stardust got the win via pinfall after hitting his reverse STO finisher. This was the first match for the Dusts coming off of their heel turn on WWE Raw the previous night. Byron played the role of devil’s advocate, explaining what motivated the Dusts. Cole was babyface, putting over the fighting champions, the Usos. This match got less than ten minutes total, but was the longest match of the show. It was relatively slow paced, with Stardust getting the win with his new finisher called “Dark Matter.” The Dusts didn’t heel it up too much during the match, but they made sure to get booed afterwards when Stardust grabbed Torito and tossed him out of the ring aggressively. Byron had a change of tune with that, saying the Dusts took it too far.

Don’t forget to check out my podcast, Shake Them Ropes, talking all things WWE by visiting HERE. If you like the show, please rate and review us on iTunes!

On to episode 101, and after a non-thrilling episode of Raw, I am hoping this show ups my enthusiasm from an abysmally low level. Tonight, we’re promised a Miz TV featuring Dolph Ziggler. So, yeah, I’m not exactly high on the chances of getting pumped up by this episode of Main Event.

Miz TV: In the ring to begin our show is Damien Mizdow, and not The Miz. We’re lucky to have Miz’s stunt double hosting this edition of Miz TV. So this may be okay, after all. Mizdow said he had a treat for all of his friends tonight, as Mizdow has prepared a monologue on the true meaning of Christmas. Predictably, Mizdow’s monologue was interrupted by Dolph Ziggler. The two went back and forth for a while on the mic, before Dolph began baiting Mizdow. Dolph said Mizdow should stop being a fanboy of Miz, and go back to being what suited him best… a ballerina. Mizdow went to attack Dolph, but Dolph ducked and hit a dropkick which sent Mizdow out of the ring. Certainly looked like it was a deal to build to a match for later on in the show.

Oh, and guess what, we got it right now!

Dolph Ziggler defeats Damien Mizdow: Dolph got the win with the ZigZag. Solid match, which got the people really into it. One of the better matches I’ve seen on Main Event in a few weeks. They did false finishes, with Mizdow kicking out of a Fameasser mid-way. Mizdow started hitting some trademark Miz moves, too, but Dolph survived them. Finally, Dolph got the big win after a ZigZag. Why doesn’t Mizdow just go all out with the stunt double gimmick? Shave the beard, lighten the hair a bit. The two could look amazingly similar. Of course, I hope the stunt double stuff will end at Night of Champions. Mizdow is no A-Ry. ***

A recap of last night’s Stephanie McMahon Divas Summit aired. It was a short recap, yet still awful. Jerry Springer was announced as hosting a Bella Twins Intervention next week on Raw.
All Michael Sam Raw references have been removed from the WWE website, short of a congratulations on him signing with the Cowboys. So that seems to be the end of that.

Before the following match began, a clip from Total Divas was shown on the Tron to the crowd. It was a segment where Nattie was told to act as a mentor to Rosa, who the Suit noted “Is coming back, and has had a few problems.” I’ll say. Nattie was upset for having to be a chaperone for Rosa, saying “If I wanted to babysit people, I’d hang out with Summer.” That drew some “ohhhh” reactions from the crowd, and our tag match was set.

Layla & Summer defeat Natalya & Rosa: Layla pinned Rosa after a Bombshell kick. Rosa was in the ring first, taking control of Summer Rae. Shortly, the two wound up outside the ring near commentary. Rosa shoved Summer back in the ring, and was about to get in herself when the cutoff occurred. Boy, what a cutoff it was. As Rosa is on the apron, Layla grabs Rosa’s trunks, and pulls them down to keep Rosa from getting back in. Rosa’s bare ass was shown clearly, albeit very briefly as the screen went black. Michael Cole was calling the match, clearly trying not to laugh. Summer and Layla then got the heat on Rosa, until the new Total Divas cast member finally was able to get a hot tag to Natalya. Natalya and Rosa could not get on the same page, however, after Rosa made a surprise tag later. Layla took advantage of the cross up between her opponents, nailing Rosa with a Bombshell Kick and knocking Nattie out of the ring. Layla got the pin, then celebrated with Summer. The match wasn’t that good, as there was the wardrope malfunction, clear miscommunication, and clumsy spots throughout. I’m hereby naming the victorious team “Sum Lay.” Yep. *1/2

A recap package aired of all the goofiness from Raw’s bookend angle. John Cena was promoted as appearing on Smackdown this Friday. 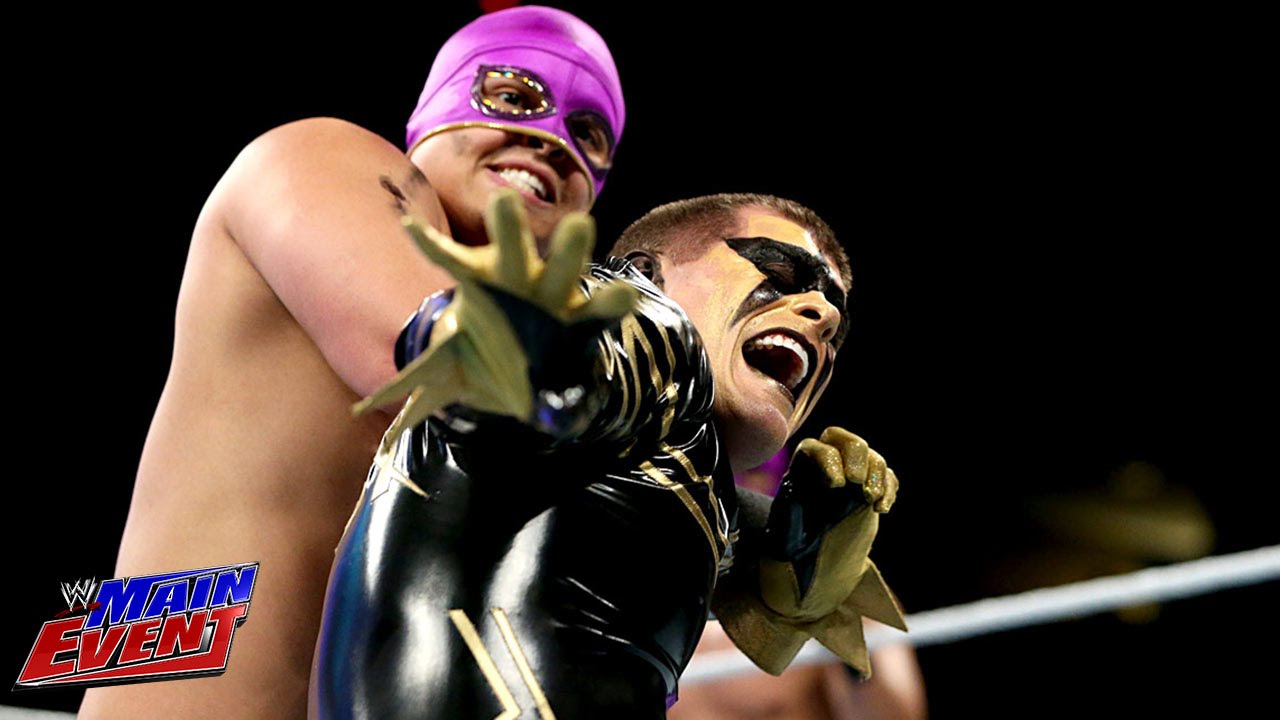 Gold & Stardust defeat Los Matadores: Cody won via Dark Matter again. Basic match, not any faster paced than last week’s bout. Another win on the road to securing the cosmic key for the Dusts. After the bout, Goldust and Stardust again heeled it up. Cole and Byron questioned how the Usos may respond to the Dusts, and Main Event went off air rather abruptly with that. **

I was going to say how these were two very paint by the numbers shows, but I’m a little at odds why RVD would get any type of victory over Seth Rollins in the Episode 100 opener. I know it’s more a Rollins knucklehead loss than it is an RVD win, but still. Two straight shows main evented by the same match, so we’ll see next week if we can make it 3 in a row! I hope not. It’s becoming quite apparent that WWE is not treating Main Event like it’s “almost-#2” show anymore, which was seemingly the case briefly when the show first became exclusive to WWE Network. The least they could do is give us some good, lengthy, exciting matches if we won’t be getting much storyline advancement anymore.