Before I begin this review I just want to take a moment to mourn the loss of a great man’s career. Many a times I poured out my heart for this man’s in-ring ability. Many a times I watched this man utilize his vicious offense and masterly work over his opponents arm to set them up for his finisher the Cross Arm Breaker. I have referred to this man as the modern day Bret Hart. That man is Alberto Del Rio. Easily my favorite active WWE wrestler and he has been fired. I don’t want to get into whether or not his actions were justified or whether he should have been fired. I just want to let everyone who never gave this guy a chance and just said “That guy’s boring” that you missed out on some great matches. I always called ADR “The Best Wrestler That No One Watches” and it’s true. He will be sorely missed by this Smackdown reviewer, and I won’t be satisfied unless he goes back to CMLL and becomes their top heel or if he has a run in New Japan which I think he would fit very nicely in. However, this is for Dylan Hales, if ADR does sign with TNA I want to put an offer on the table to trade you reviewing Smackdown for reviewing Impact Wrestling.

We kick off this episode of Smackdown with Dean Ambrose making his way to the ring to announce the stipulation he has decided upon for his match vs Seth Rollins at Summerslam. Ambrose won the Beat the Clock Challenge this past Monday when Heath Slater won his first main event singles match on Raw by upsetting Seth Rollins after Ambrose desecrated the Money in the Bank briefcase with soda, popcorn (which Michael Cole had the great call “The popcorn is now candy!”), and stupid cowboy hat that belonged to a subpar commentator. (I’m looking at you JBL)

Dean Ambrose says the Authority can’t plan for Dean Ambrose. Dean pulls out a piece of paper of all the ideas he came up with. His ideas are 1. JBL’s cowboy hat on a pole match 2. Coal miner’s glove match 3. Surrounding the ring with alligators 4. Sumo wrestling match 5. Loser has to wash Triple H’s car match, but Dean is pretty sure Seth already does that.

Seth Rollins comes out to interrupt and wants Dean to cut to the chase to what the stipulation is for their match. I just can’t get over how much better Seth Rollins is on the microphone compared to his Ring of Honor days. People need to give this guy more credit. I dig his heel character.

Dean Ambrose goes no to tell Seth that at Summerslam he won’t be able to run away because he will run into a wall of bodies. Bodies that he and Seth used to stack up when they were a team. Dean tells Seth that they made a lot of enemies back in the day and now those enemies are going to surround the ring. Ambrose tells Seth that on August 17th at Summerslam “Mr. Money in the Bank is going to go broke”.

Seth then tells Ambrose that the Authority has given him the opportunity to name Dean’s opponent for tonight. Seth chooses Randy Orton. This was really stellar mic work from both Dean and Seth. Dean put over a lumberjack match like no one has since HBK and Hacksaw Jim Duggan did back in 1993.

Big Show and Mark Henry vs Rybaxel (Ryback and Curtis Axel): This is the team that Joe Lanza wants to be fired vs the most improved tag team in wrestling. Just kidding, Joe. I agree with you on the face that the WWE should cut their losses with these veterans that aren’t really doing anything and aren’t really a draw anymore. The Great Khali’s name should be thrown in that hat for sure.

Curtis Axel starts the match off messing around with Henry and running away. Ryback screams at Henry to hit “The Big Guy”. Eventually Big Show comes in and runs over Axel like a bus. Show hits the ropes the ropes like I’ve never seen him hit the ropes. Eventually Henry hits Axel with the World’s Strongest Slam and Show choke slams Ryback for the win. I kind of dig this Henry/Show tag team. They were pretty entertaining here. **

Dolph Ziggler is in the back with the divas and Adam Rose and they are all by a monitor watching what happened to Seth Rollins’ briefcase. Ziggler is cracking jokes about it and everyone is laughing as Seth Rollins walks in and challenges Ziggler to a match tonight. This exchange between Ziggler and Rollins was really, really great. Rollins is really fitting into this heel role and Ziggler has been stepping up his game big time.

Sin Cara vs. The Border Patrol aka Damien Sandow: Sandow comes out in Border Patrol get up for some ultimate heat here in south Texas. Sandow has been pulling these gimmicks and get ups really well, but when is WWE going to understand that local cheap heat doesn’t really translate well on TV? On Monday he was in Oklahoma sooners attire and was challenged by Mark Henry would was wearing this Texas shirt. I could not care less about Oklahoma vs. Texas. Anyhow, Sin Cara here picks up the win and apparently picked up new remixed theme music. Sin Cara won with the Swanton bomb. 1/2*

We get to see the Lesnar/Cena video package again. This video package was really good, but I can already tell I am going to grow sick of it by Summerslam. Why couldn’t they cut this up into a few different videos? They showed the same video package TWICE on Raw this past Monday. By the way, if Brock Lesnar ever told me he was going to leave me in a pile of my own blood, urine, and vomit I would probably crap myself. And then I would be left in a pile of blood, urine, vomit and crap…… ew….

Dolph Ziggler vs Seth Rollins: This match really suffered from a cold crowd and two commentators that would rather talk about golf and who came up with the nickname “The Architect” for Seth Rollins. These two could have put together a way better match than this and they really appeared to stop trying halfway through the match due to a lack of energy from the crowd. It was pretty miserable to watch really.

Michael Cole did bring up his sit down interview with Dolph Ziggler this week on WWE.com. This was a really good interview that really put over the Ziggler vs Miz match at Summerslam. WWE should be showing this video on Raw and Smackdown.

Rollins wins with a Curb Stomp. Ugh. This match should have been way better than this. *

Renee Young is in the back with Randy Orton. Renee asks Randy how he feels about having to wrestle Dean Ambrose tonight. Shouldn’t Randy be a little upset that Seth Rollins put him in a match? Shouldn’t Randy question why Seth is all of a sudden higher in the hierarchy of the Authority now that he can make matches all of a sudden? But, no. Randy just talks about how Dean Ambrose may be unstable, but Randy is out of control and that he himself doesn’t even know what he is going to do tonight. LAME.

Natalya vs Paige: This match was short, but was better than Ziggler and Rollins. I would like to see these two wrestle a longer match. Paige wins with the PTO. **

Big E vs Rusev w/ Lana: Apparently Big E has been demoted from Rusev’s rival to mere fodder for the Bulgarian Brute. Also, Xavier Woods seems nowhere to be found?? What happened to that angle that was going to reprise the Nation of Domination and was a hot topic of whether they should be race fueled or not? Did the WWE just drop it altogether? I’m confused.

We get a recap of the Jericho Wyatt feud now with Luke Harper and Erick Rowan being banned from ringside for their match at Summerslam. Jericho cuts a really good promo here. I love that Jericho is really striving to make this feud work; I just hope he can deliver on these next two PPV matches with Wyatt before he goes back to Fozzy.

Dean Ambrose vs Randy Orton: This match much like the Ziggler/Rollins match really suffered from a crappy crowd. Ambrose did all of his usual stuff and really tried to make this a good match, but to no avail. Rollins comes out to cause a DQ. Rollins and Orton beat Ambrose down. Seth goes and steals a soda from a fan much like Ambrose did on Monday. Seth pours the soda all over Ambrose’s face. *

This was an absolutely terrible episode of Smackdown. I am usually the eternal optimist in life and when I watch the WWE, but this show had few redeeming qualities. Seth Rollins’ mic work and character work backstage with Ziggler were both really good and surprisingly better than the match he had with Ziggler. There is nothing to go back and watch from this show though. Just sit back and watch the G1 Climax Finals, because that show has Show of the Year written all over it and this show has The Most Skippable Show written all over it. Seriously. I just wrote that all over it.

Be sure to catch all of my weekly columns for Voices of Wrestling: 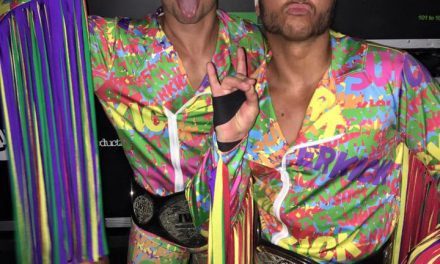 This Week In ROH: Jay Lethal Gets His Head Shaved 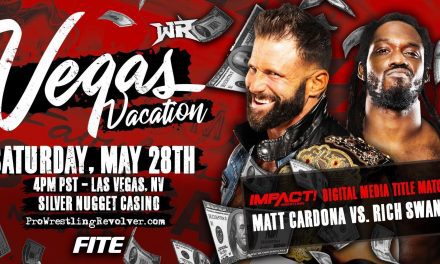