Raw starts off with The Authority, which I guess is now a stable including Kane, Seth Rollins, Randy Orton, Stephanie McMahon and Triple H. The latter ran down all the big matches involving his guys while plugging the Network hard, to the point they were mocking themselves. They kinda have to plug it hard at this point. Seth Rollins and Dean Ambrose will have a beat the clock challenge match with the winner getting to pick the stips for the big match at SummerSlam. Stephanie talked about her contract signing for tonight, saying she’ll put Brie Bella in the hospital right next to her husband Daniel Bryan. Randy Orton started to talk about Roman Reigns when the man in question came out.

Reigns pretty much said he’ll go down there and kick his ass tonight for free. Triple H made yet another fucking match with Kane and Roman Reigns, this time a last man standing match and it’s right now. Time to bring back the REMATCHAPALOOZA~! meme.

Last Man Standing Match – Kane vs. Roman Reigns: REMATCHAPALOOZA~! Largely a brawl around the ring, using the stairs and whatnot. Reigns mostly controls. Kane fights back with a kendo stick. Reigns quickly regains control. Kane cuts him off and brings in a table. Reigns counters with a samoan drop and goes for the superman punch but Kane grabs him and chokeslams him into the table. Kane tries a tombstone on the steel chair but Reigns counters with a DDT on it. Reigns hits the superman punch but the referee doesn’t count, which even the announcers are confused by. Reigns hits the spear after Kane counters it once and that’s enough for the referee to count to ten. This was fine, but I don’t need to see Roman and Kane have a match for a while. Also, name the last time the mighty scary demon Kane won a match or looked intimidating in any manner.

It’s time for a “special look” at the Lesnar/Cena match. Lesnar says he enjoys hurting people and is an ass kicking son of a bitch. He talks about beating the Undertaker at WrestleMania 30. Why would people think he couldn’t beat him, like he’s some sort of mythical God? John Cena says he’d rather not talk about his successes. He only sees what’s coming up and puts over Lesnar. Lesnar said that if he didn’t leave, there would be no Cena.The video ends with Heyman saying Cena will be left in his own blood and vomit. Really quite the video that you should check out if you haven’t seen it already.

Damien Sandow came out wearing boomer sooner gear, I guess because the Sooners are in a feud with whatever university this Raw show is taking place at. The Longhorns, there we go. No, I don’t know my college football, sorry!

Mark Henry vs. Damien Sandow: The announcers buried people from Oklahoma. Mark Henry won in like 30 seconds with the world’s strongest slam. Three guesses who this was aimed for. Not anyone watching, that’s for sure.

Adam Rose and the rosebuds were backstage, afraid of the oculus mirror that was right in front of them for some reason. He looked into the mirror. He saw himself in a suit. He got all scared and they went away. Compelling television.

Dean Ambrose vs. Alberto del Rio: Ambrose still has his shoulder taped up. Is the new Bob Orton cast gimmick? The commentators actually were not bad here, pointing out that Ambrose has been put in a match with his bad shoulder against a submission guy whose finish is an armbar. They had a really long, uninteresting match. Did pick up after a scary looking reverse suplex. del Rio kept working on his arm, but managed to hit the dirty deeds DDT (kinda, sorta…well not really) for the pinfall.

This means we’re going to have a 15 minute RVD match. Man, man. MAN.

There was a match between Sin Cara and Rusev on the app. Rusev won on the app. That tells you all you need to know about Sin Cara at the moment. Lana started to sing happy birthday to the President in Russian when Coulter and Swagger came out. Coulter said he’s sick of hearing about Vladimir Putin and Rusev Crush. Says Swagger will be defending the 13 bars and 50 stars and listed a bunch of people who Swagger will be representing at SummerSlam. They did their catchphrase, then they ended up in a flag waving contest. Lana and Rusev pretend like they’re leaving, but Rusev jumps Swagger from behind and starts jumping him with the Russian flag, sending him to the outside. They corner Zeb, but Lana stops him and mocks Zeb with the catchphrase before leaving. Good stuff. 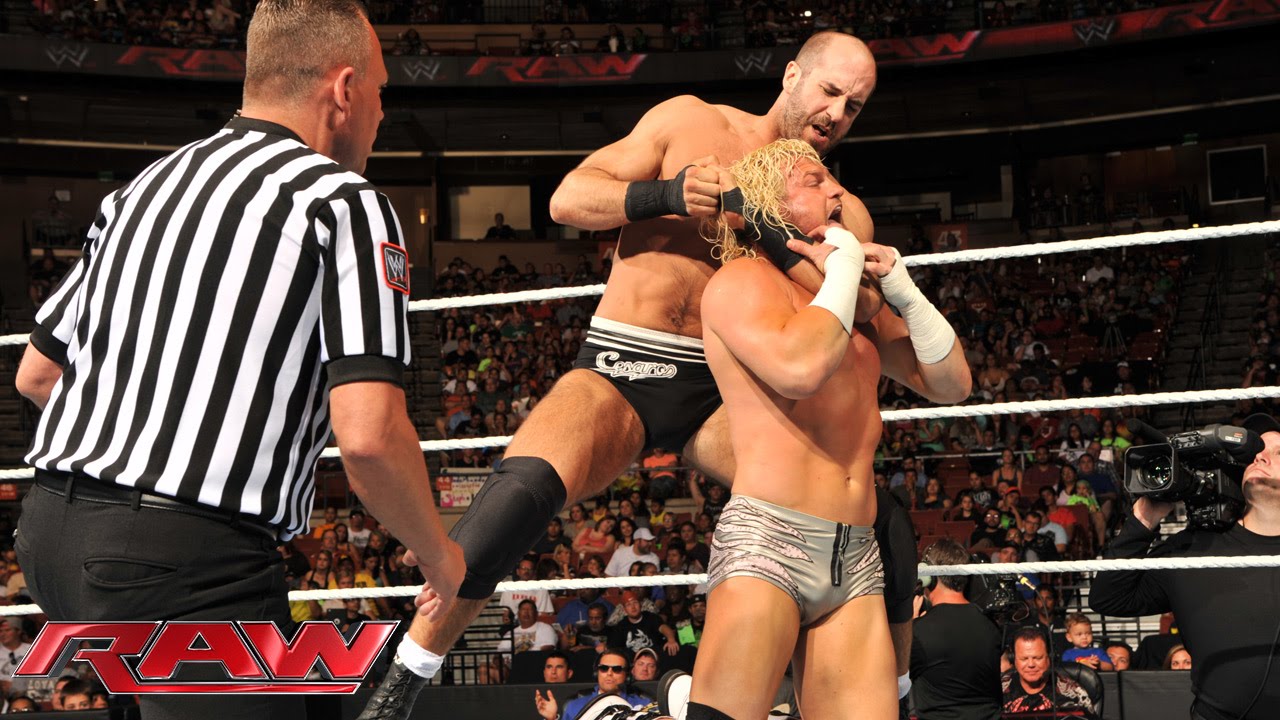 Dolph Ziggler vs. Cesaro. Neither got entrances. Ziggler won quickly with the zig zag. I don’t even have the words. What is there to say? The biggest problem in WWE is the completely petty politics that are ensuring the majority of the roster doesn’t get over.

Dolph and Miz have a confrontation after. Dolph takes him out.

They show footage of AJ getting thrown off the stage last week on Smackdown by Paige. They interview Paige, who is pretending nothing is wrong and wishes AJ a full recovery. The way they are presenting these women at the moment is so unrealistic and stupid it’s beyond comprehension.

RYBAXEL VERSUS GOLDUST AND STARDUST: THEY WERE WRESTLING WHEN THEY TOOK A BREAK TO DO STUPID VIGNETTES. WEEKS LATER, HERE WE ARE. They had a solid match that the brothers won. SAME TIME NEXT WEEK RIGHT GUYS.

The Authority were backstage when Kane walks in, angry. He takes off the mask and gives it to them. I don’t care. No one does. Point me to one person who honestly cares what Kane does in 2014.

JBL was astonished Kane took off his mask. He doesn’t count, he’s a fucking moron.

Chris Jericho vs. Luke Harper: They had a match. Yep, that best describes it. Jericho had him in the walls when the Wyatts appeared. He took out Harper and Rowan in the ring, but gets blindsided by Bray and gets laid out. DQ finish for Jericho, so Harper is out of SummerSlam as well. Man, I can’t wait for SUMMERSLAM. This program is completely uninspiring.

AJ Lee returns from her devastating injury that they showed twice tomorrow night on Main Event.

Diego vs. Fandango: Hornswoggle is now accompanying him. They did comedy. I think they should have shown the last two hours if they wanted something to laugh at. Diego won immediately with a backstabber after Fandango was bumped into Hornswoggle. Hornswoggle was then helped up by the ladies and then they danced around Fandango until Fandango jumps Hornswoggle. Torito and Diego beat him up again for good measure.

Randy Orton is backstage with Renee. They show the beatdown he gave Reigns last week. He said something intimidating, I didn’t pay attention. Hey, it was a Randy Orton promo, ok. Plus it was short. 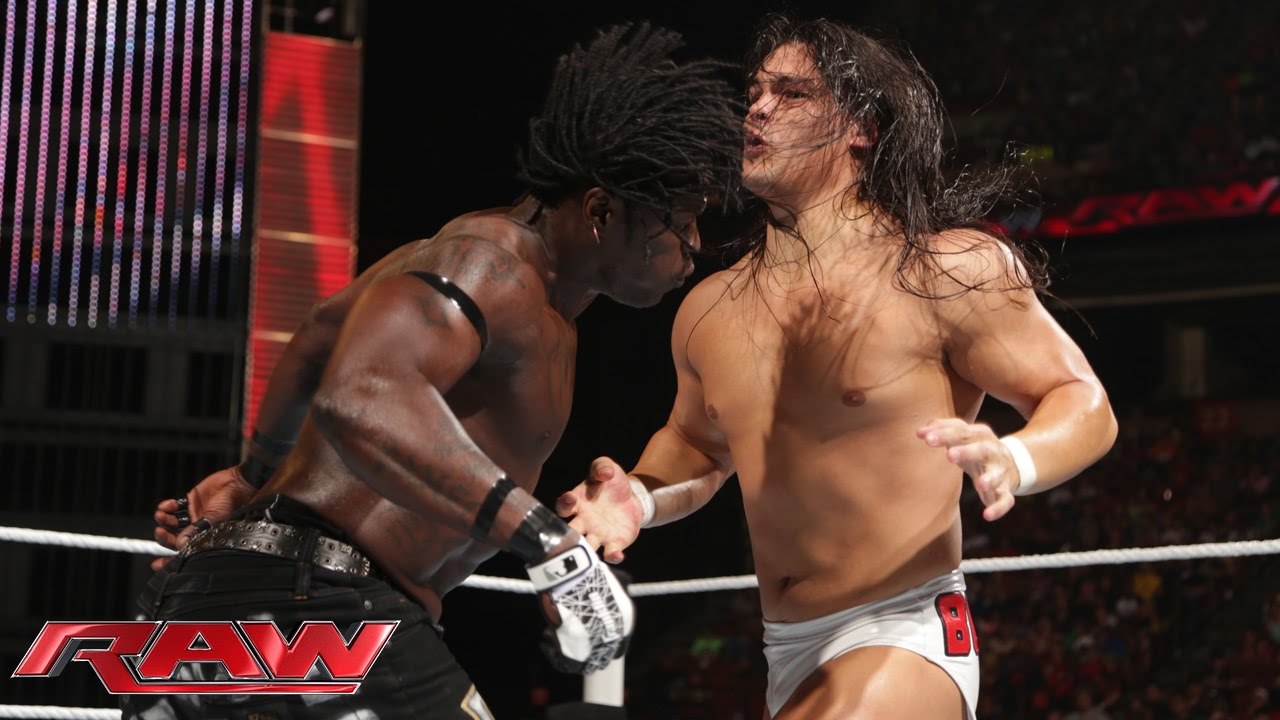 Bo Dallas vs. R-Truth. I named his opponent right as Michael Cole did as they went to commercial break. Stop me if this sounds familiar, but Bo Dallas immediately won after a rollup and grabbed the tights. R-Truth, terrific babyface, jumped Bo after losing only for Bo to take him out with the bo dog. People booed him for defending himself.

Bray Wyatt appears. Asks why. Good question. He laughs. At SummerSlam, he enters the threshold of battle without his brothers. He can ask whatever he wants, but at the end Bray asks what he is. He rambles, then sings his song. He didn’t answer the question.

They re-air the Brock Lesnar video. Maybe they just need to replay it for the rest of this hour at this point.

Seth Rollins vs. Heath Slater: See, they were going to have a match between RVD and Seth Rollins. But PER THE AUTHORITY, RVD was no longer his opponent. It was Heath Slater. Dean Ambrose immediately came out to DISTRACT SETH ROLLINS. Man, the geniuses in creative that came up with this match. He ripped apart his contract. Seth reacted. He poured soda into the briefcase. Seth reacted. He ate popcorn. Seth reacted. NONE OF IT FUCKING MATTERS, JUST PIN THE IDIOT. Seth finally gets distracted one time too many and Heath Slater rolled him up for the win. Yes. Marvelous. Just fantastic. I love the WWE.

Just to make sure none of this shit mattered, Dean Ambrose will announce his stipulation on SMACKDOWN. Just read the spoilers tomorrow and don’t bother.

More begging of people to buy the Network. Because after great shows like this one, you want to pay WWE money for more. Though, granted, most WWE PPVs are better than this. Way better.

Stephanie and Brie came out for their contract signing. Triple H says usually the COO looks over this sort of deal, but tonight he wants to be a supportive husband so Michael Cole will handle the proceedings. Brie says stop before we all vomit. Stephanie says if anyone should know about devoted spouses, it’s you. Isn’t your hippie dippie husband still recovering? Brie says yes, but the real question is have you recovered from the arrest from two weeks ago. She asks if it was easier to trade her powersuit for her orange jumpsuit, or her husband for her cellmate Big Beulah. This got zero reaction. Brie says she’ll not only beat her, but embarrass her. She says this is not only for me, for Brie, for Daniel Bryan, but also for all the other people the Authority feuded with over the last year. Stephanie says Brie is nothing more than a reality star wannabe who clinged on to her for a match at SummerSlam. She’s embarrassed just standing right next to her, and at SummerSlam she’ll eat her heart out. At that moment, she whacks Nikki in the side of the face. Triple H takes the table and pins Brie to the corner where Stephanie lays out Nikki with a pedigree. Triple H laughs at Brie and get slapped for his troubles as she escapes, but Stephanie smacks Brie’s head on the table then lays her out with a pedigree. Stephanie and Triple H make out to end Raw. Fitting.

It’s shows like these that make me wonder what the wrestling world will be like come October. TNA will probably be out. Ustream will drop iPPVs.  I don’t even want to fathom it. Be prepared, people. You thought post-2001 was bad, you ain’t seen nothing yet.

PLUG: Read all the reviews of the G1 show I didn’t cover here on VOW at this link. Watch Day 8. You’ll be crying after, not only because of how great that show was, but because there won’t be too many, if any at all, like it for a long while once the G1 is over. 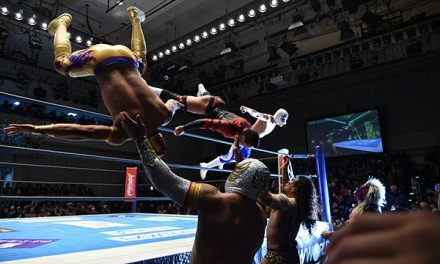