What is there left to be said about G1 24? We’re out of superlatives, as this tournament has universally managed to not only top last year (which was the best pro wrestling tournament ever), but somehow completely blow it out of the water. New Japan has accomplished this in slam dunk fashion, even with five nights remaining on the schedule, including the finals from the Seibu Dome, and this card in front of a sold out crowd in arguably the best pro wrestling city in the world, Osaka. We’re a little past the half way point of G1, and the sheer volume of great matches and amazing Show of the Year contenders have helped New Japan blown past Dragon Gate in the race for Promotion of the Year, despite a shaky few months of weird booking and sub par (by ridiculous New Japan standards) shows back in the spring.

Katsuyori Shibata vs Tomoaki Honma and the main event of Hiroshi Tanahashi vs Shinsuke Nakamura looked to be the best matches on paper, but if the first seven nights have taught us anything, it’s that literally any match in this tournament can end up being fantastic. And with a ridiculous six matches at 4-stars or better, it was business as usual in Osaka on Night 8 of what has been a simply incredible string of shows.

1. Block A – Davey Boy Smith Jr (6) vs Tomohiro Ishii (6) – They were clobberin’ right from the bell, before DBS reversed a way too early brainbuster attempt into a vertical suplex of his own to take the early advantage. From here is was tough guys doing tough guy things, building to Ishii’s top rope brainbuster, which DBS survived. DBS also kicked out of a big lariat, and then made a comeback. The big spots from there were Ishii kicking out after a powerbomb (a near fall I totally bought), then selling it like he was woozy & unable to stand, and immediately kicking out again when DBS went for a follow up pin. DBS went for another powerbomb, but Ishii reversed with a hurricanrana. It didn’t look great, but nobody cared, because it was awesome. Ishii hit the brainbuster and picked up the win, which he desperately needed with 6 points and this being his 8th match. Great opener. ****

2. Block B – Toru Yano (6) vs Hiroyoshi Tenzan (6) – If you are into the standings, this was another critical bout featuring two guys with 6 points each. This was another short, sprinty Yano match, which isn’t a complaint. Tenzan controlled 90% of it. Tenzan locked on the Anaconda Vice, but they did a ref bump. Visual tap from Yano. Yano tried some of his tricks, but ended up right back in the Anaconda Vice, and Tenzan picked up the win. My favorite spot was Yano going for a low bow, but Tenzan being one step ahead and countering with the Mongolian chops. Fun little bout. **1/2

3. Block A – Shelton Benjamin (8) vs Yuji Nagata (6) – This was all about counters. Shelton countered two backdrop hold attempts, the first with a DDT, and later he managed to turn one into an ankle lock, and managed to make it look good. Nagata returned the favor by slipping out of an ankle lock and doing the Shirome spot, which I wish he would not do every single match. Shelton made the ropes, and locked on a sneaky ankle lock when Nagata dragged him back to the middle. Lots of ankle locks. Nagata eventually won with one of his Nagata Lock crossface variations. It was OK, but I never like Nagata matches as much as other people, so it was probably better than I am giving it credit for. **3/4

Shelton goes for Paydirt, but Nagata counters it into an armbar!! #NJPW #G124 http://t.co/Gx88sCgVcy

4. Block A – Luke Gallows (4) vs Satoshi Kojima (6) – I’m always disappointed now when Gallows doesn’t wear the Hack Myers tribute gear. I’m also usually disappointed in Gallows shitty matches. To be fair, Gallows has been better during the G1 (who hasn’t?), but let’s face it, the tag team with Anderson has not been great. I thought Gallows would win here for parity sake, but it didn’t end up that way, with Kojima winning with the lariat. Decent enough match for this spot on the card, with things picking up nicely after a really boring Gallows control period. I should mention that Gallows took the best corner chops since Big Daddy Yum Yum. ***

5. Block B – Tetsuya Naito (8) vs Hirooki Goto (6) – The difference in fan reaction to Naito in this year’s tournament compared to last year is night & day. It looks like they booked the big Naito G1 win one year too early, and even though he’s way over these days, I think it would be a mistake to do it two years in a row. Goto is one of the most underrated wrestlers in the world, if not the most underrated. He’s flat out great. Crowd was molten before the lock up, and for an early overhand chop exchange. Goto beat up Naito on the outside, and they did the 20-count tease. Somebody needs to lose by count out early in a match to establish that it can happen. This match was pretty great, with Goto winning with the Shouten Kai. My only minor gripe is that sometimes Naito has a bad habit of shaky selling and running through his spots, and there was some of that here. But Goto was flawless, and the crowd was incredible, so I can overlook it because it didn’t take much away from the story. This bout will probably get lost in the shuffle in a tournament full of amazing stuff, but I really enjoyed it. ****1/4

6. Block B – Lance Archer (6) vs AJ Styles (8) – The primary theme of this tournament has been AJ Styles settling in and finding his footing in New Japan, and putting in some of the best performances of his impressive career. That continued here, and Archer held up his end of this as well, with in particular some incredible intensity, in what was his best performance of the tournament so far. Archer tossed AJ around early, until getting caught in a figure four around the ring post. AJ used another figure four in the ring, and Archer was great in his struggle to make the ropes. AJ slipped out of several Blackout attempts, and kept chopping at the leg. Archer used the Dark Days and nailed a nasty chokeslam for a near fall. Archer has a real nice arsenal of signature moves that he builds to very well. Archer busted out the moonsault (which he does not overuse and probably only uses in 20% of his matches), but missed. AJ went for a springboard move, but got caught in the chokeslam position. He flipped out of the slam and hit the Pele Kick. He then put on the calf cutter, and Archer tapped immediately, so all of the leg work meant something. Great match, maybe the best match of Archer’s career. ****1/4

7. Block B – Minoru Suzuki (6) vs Togi Makabe (6) – This was completely different than every other match on the card, and the final few minutes were just incredible. Makabe had Suzuki in a figure four variation (where he was in a vertical position as opposed to on his back), and was punching Suzuki in the head over & over as Suzuki screamed and rose up like the Undertaker after each blow. Suzuki tried to battle back with slaps, but lost the battle. He eventually inched to the ropes to earn the rope break. The finish was Suzuki punching Makabe in his injured jaw, delivering a boot to the face, and then using Saka Otoshi for the submission. Makabe was great selling the choke, and was turning colors. Another great match. ****1/4

8. Block A – Tomoaki Honma (0) vs Katsuyori Shibata (8) – This was everything I wanted it to be. I’m running out of adjectives for these matches. Shibata was Shibata, and Honma was Honma, and it did not disappoint. Osaka took this up a notch, too. By this point in the show, it was obvious we had another Show of the Year contender on out hands. ****1/2

9. Block B – Yujiro Takahashi (4) vs Kazuchika Okada (8) – Okada survived a Tokyo Pimps, hit all of his shit, and won with a Rainmaker. I’m guessing this would be the best match on something like half of all wrestling cards worldwide in a given month. This was the seventh best match on this show. ***1/2

10. Block A – Hiroshi Tanahashi (8) vs Shinsuke Nakamura (10) – The pacing here was screaming draw, which made the finish all the more brilliant, as Tanahashi scored the pin on a leg clutch roll essentially out of nowhere once they lulled you into thinking it could go the full 30. This was very much different than the previous Tanahashi/Nakamura matches from earlier this year. The talked about spot will be Tanahashi catching Nak’s leg on a Boma Ye and going for a Dragon Screw, but Nak spinning out of it and coming right back with a knee. In the presser, Tanahashi said he used the leg clutch roll as a tribute to Karl Gotch (today was Gotch’s birthday). Broken record, but this was another great match on what will go down as one of the best shows of the year, and one of the better shows of all time. ****1/4

Nakamura goes for his spinning high kick, but Tanahashi catches him and hits a Dragon Screw #NJPW #G124 http://t.co/9zgZCeBIVX

The eighth best match on this show was three stars. EIGHTH BEST. What else am I supposed to type at this point that hasn’t already been said? It’s almost getting stupid how great this tournament has been. Another must see, all-time great show. 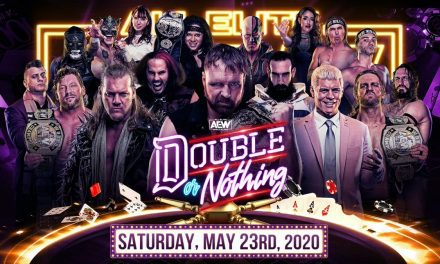