Tonight, Dean Ambrose is back and he means business. He began the show with a promo in the ring, calling out Seth Rollins. He said it was never his strong suit to shake hands and kiss babies, but on Raw, he was sent on a promotional tour so the Authority could keep him away from their darling, Seth Rollins. Ambrose waited for Rollins to come out, but he never did. He said he’d put away everyone in front of him until he got revenge on Rollins for selling out. Ambrose dropped the mic, and Alberto Del Rio’s music hit. Del Rio came out, calling Ambrose a dog who just came out of the dumpster. Ambrose agreed. Del Rio told Ambrose to fear the armbreaker, which Ambrose sold by looking at his still taped up shoulder and shrugging. Del Rio vs Ambrose is our main event!

The Usos vs RybAxel: Jey Uso pinned Curtis Axel with the top rope splash. Xavier Woods was sitting in on commentary, while Big E & Kofi Kingston stood behind him watching the bout. Xavier didn’t want to be asked any questions, but said he’d explain why the new group is together and what they’re looking for. He, however, really didn’t do that, saying instead they’d explain when the time comes. Xavier came off like he was trying to play smart, as in intelligent. He didn’t come off as real, and was taking longer to say simple things without actually using big words or anything. It was just a little odd. Xavier claimed he’s using Big E and Kofi’s frustrations to propel them to greater heights. The match, anyway, was fine. Usual stuff from these two teams. It was really more about getting Woods’ group into the limelight as future contenders to the Usos.

They showed a video recap of the Brie vs Stephanie angle from Raw. There’s no such thing as too much Stephanie!

Video Inset: Heath Slater was getting excited for his tag match tonight, with Titus O’Neil right behind him. Slater whipped his hair into Titus, so Titus told him to stay out of the way tonight or else he’ll get whooped.

Slater Gator vs Dungeon Broskis: Heath Slater & Titus O’Neil defeated Tyson Kidd & Zack Ryder when Heath pinned Kidd after a top rope powerslam. Zack Ryder was rocking a goatee tonight. Dude’s have to change it up sometimes. Tom Phillips called this a match between two WWE odd couples, although Tyson Kidd was playing a full on baby face tonight. Titus was not so fond of teaming with Slater, still, as he wasn’t so thrilled with tagging Slater in during the match. After the win, Titus was still not thrilled with Heath, but a win is a win. They’re really going with these two as a team for now, which works, since neither were getting far as singles. Slater still uses the 3MB music, for those keeping track.

This Friday on Smackdown, Randy Orton will deliver a message to Randy Orton. Here’s hoping he reenacts Kendrick-Undertaker from a decade ago. And yes, that was over a decade ago. We’re old.

Al of the River vs Dean Ambrose: Dean Ambrose defeated Alberto Del Rio via DQ when Seth Rollins got involved. The commentators questions Alberto Del Rio’s plan of trying to provoke the Lunatic Fringe of Dean Ambrose. Tom Phillips even promoted the WWE.com article on the extreme rise of Dean Ambrose. This match was all about Alberto Del Rio trying to take out Dean’s shoulder to set up his submission finish. Late in the match, as a submission victory for Del Rio looked close, Ambrose suddenly gained the advantage after a Nigel clothesline. On that cue, Seth Rollins made his way out to interfere. Rollins and Ambrose went at each other around the ring, then in the ring, for a brief bit until Ambrose sent Rollins packing. Del Rio tried to attack Dean from behind, but Dean caught it, countered, and nailed the Dirty Deeds DDT on him. The show ended with Dean standing tall in the ring, staring down a retreating Seth Rollins.

This was a fine show, with nothing bad at all. All the matches were entertaining in their own ways, and we got more build to the eventual Rollins vs Ambrose match. RybAxel continues to be sent down, after seemingly being built back up as recent as two weeks ago. We don’t have a name, yet, for the Woods’ trio, but a tag title clash with Big E & Kofi vs Usos seems imminent. If I had to rate this show on a scale of 1 to 10 AJ Pierzynski bobbleheads, I’d give it 7. It was an above average Main Event, and a fine hour of WWE TV. 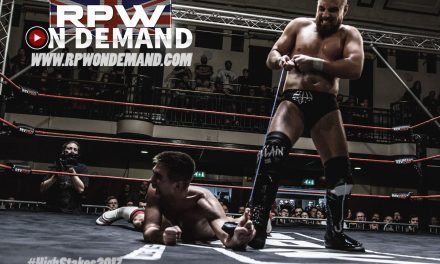