Just because we took a week off doesn’t mean we’re skipping a single action packed minute of everybody’s favorite WWE show that peaked four years ago. So what we have for you this week, loyal reader (possibly literally), is a very special DOUBLE REVIEW of not one, but TWO weeks of Superstars. That means if you’ve been patiently waiting for my breakdown of Naomi vs Rosa Mendes, your wait has ended.

1. Naomi vs Rosa Mendes – The best thing about The Funkadactyls breaking up is that I never have to type “Funkadactyl” again, and no longer have to stare at the screen and wonder whether I spelled it correctly. Naomi looks like she’s keeping the “Somebody Call My Momma” theme, so if you’re scoring at home the WWE theme that gets passed around more than a dirtsheet in an 80’s locker room has gone from Ernest  Miller, Brodus Clay, Tons ‘o Funk, Xavier Woods, The Funkadactyls, and now Naomi. Rosa Mendes has been largely M.I.A., aside from a WrestleMania appearance with weird hair, and getting tossed into a kiddie pool filled with shit in the RAW segment than sent Jason Felix into deep hiding like Salman Rushdie. Rosa will be on Total Divas, so expect a push. Naomi won this. Yes, after two weeks, you get three words of analysis of this match up. What do you want from me? It was bare bones basic and totally inoffensive. *

I never want to hear FOLLOW ME! INTO THE JUNGLE! ever again in my entire life.

Recap of stuff with Lana, Zeb, Jericho, Wyatt…this is several weeks old and nobody cares, so let’s move on.

A Total Divas Season 1 commercial for The Network airs. It’s a chance to re-live the “Tyson won’t fuck Natalya” angle which in hindsight would have worked better this season.

2. R-Truth vs Ryback – Xavier Woods is with R-Truth. This aired before they started the militant black angle with Woods, which i’m hoping has more teeth and ends up far edgier than Zeb’s all time tamest & harmless wrestling racist ever that not-so-shockingly transitioned seamlessly into a face act because most people liked him as a “heel” anyway. If you’re going to race bait & troll, you’ve got to get under the skin of the easily & habitually offended types far better than Zeb did. Everybody has that Vietnam vet uncle who drinks too much at family get togethers, says borderline racist shit but is smart enough to hold his tongue just enough to not go over the top because of that one cousin you have that dates a black guy, brags about always voting republican without ever even knowing the names on the ballot, and has a van covered in POW MIA bumper stickers. Nobody hates that guy, you just say “oh, Uncle Zeb, you’re so wacky!” and even though he insists he isn’t drunk, he clearly had one too many Budweiser’s so you make sure somebody drives him home. Ryback won this with the Shell Shock. Or is it Shellshock? **

Battleground preview stuff, as we move on to the next show.

1. Adam Rose vs Heath Slater – Tom Phillips says this is a rematch from four weeks ago. I always appreciate that kind of continuity. What I don’t appreciate, is Adam Rose beating dudes I like on a weekly basis. Hornswoggle is still completely bald from losing the hair vs mask match to Torito that took place what seems like three years ago. I wish my hair grew at wrestler pace. I need haircuts practically weekly to keep my hair looking decent for the single ladies of College Station, Texas. This was a nothing match. The Exotic Express abducted “Swoggle, and Slater was attacked from behind and hit with the Party Foul while distracted & concerned for his lone remaining non endeavored buddy. Who is the face here? Rose is dastardly. 1/2*

“Did You Know? Last Sunday, Battleground was the most socially active show on all of TV, beating every show on CBS, ESPN, MTV, ABC, TNT, and HBO by 3 times!”

I will say this. Reigns had the best singles match of his life against Alberto Del Rio on Smackdown. Go watch that.

They show the Xavier Woods, Big E, Kofi Kingston Nation of Domination 2.0 deal from RAW. Byron Saxton interviews R-Truth to get his take on Big E essentially accusing Truth of being a minstrel act. Truth blows it off, and instead chooses to focus on his opponent tonight, Alberto Del Rio. He then sings & dances his way off of the screen. Welp.

Backstage, Heath Slater is mad at ‘Swoggle for his apparent new affiliation with the Exotic Express.

I was happy to see those two segments, because it was some rare (albeit very minor) storyline development on this C-show that Rich forces me to watch.

Next is the Bray Wyatt segment where he took over the Highlight Reel. Here’s a weird one. I never knew (or never picked up on the fact) that all of this time Bray referred to himself as the EATER OF WORLDS. That is so, so lame. I will say this about Bray, who I have been very outspoken about not being a fan of in any way. He’s getting over as a heel now, as opposed to a De facto face. Some of that might be people getting sick of his act, but I think he deserves some of the credit too for adjusting his promos a bit.

2. R-Truth v Alberto Del Rio – Rematch from three weeks ago, we are told. They even show visual evidence. I have no recollection of the match, but ADR won with the cross arm breaker. ADR is in a bad place right now, completely directionless. That face turn a few years ago was the death of him. They do the requisite out of the ring spot, and we go to commercial. When we return, ADR is offering R-Truth his hand and attempting to adhere to the code of honor. R-Truth punches him in the face instead. ADR takes over following a wicked enzuguiri. Side headlock, and ADR calls some spots that the guy in the last row was able to hear. He might as well have used a megaphone. Truth hits a DDT, which has become a trendy move lately in WWE. Truth misses a scissor kick, ADR sets up the cross arm breaker but Truth slips out. Cool sequence. ADR kicks Truth in the head, and Truth is dead. He could have pinned him, but uses the cross arm breaker anyway for the win. Not a bad little match. **

The Bella/Stephanie McMahon RAW stuff is shown, including the arrest angle. The show wraps up with the Paul Heyman/Brock Lesnar Summer Slam promo. 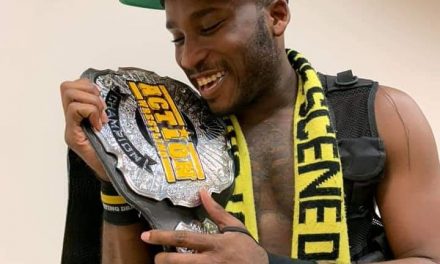