Here we are, day 3 of the G1 Climax 24 tournament. We’ve already seen some spectacular matches and cards so far, so will day 3 deliver? There are high expectations coming off the first two cards, so it’s going to be tough. Plus this looks be kind of a weak card on paper, at least in terms of the midcard. The last two matches sound like surefire hits, so tonight sounds like it’ll be a fun time.

Also, this was on extremely late and as I’m typing this after the show ended I’m ready to pass out. New Japan, please don’t ever do a show this late again. PLEASE!

Doc Gallows vs. Tomoaki Honma: Gallows threw Honma around early. After an exchange, Honma tries for the headbutt but misses. Gallows takes control, and after brawling on the outside for a bit returns to the ring and works him over. Gallows misses a leg drop and Honma fights back with a seated dropkick. They miss a bodyslam attempt, but they get it and Honma hits the headbutt. Gallows hits a delayed suplex and hits a splash followed by a shoulder tackle for a nearfall. Crowd is really into Honma. Tries the headbutt off the top rope, but it doesn’t connect. Doc hits a lariat that gets a nearfall. Gallows pole but still another kickout. Honma breaks out of a second and rolls up Gallows for a nearfall, but Doc takes him out with a big boot, hits a second Gallows pole and Gallows gets the win. I’m starting to wonder if Honma is going to win anything in this tournament. It was alright with a hot ending, but nothing beyond that. ***

Lance Archer vs. Karl Anderson: It ends up on the outside early. Anderson wraps Archer’s leg on the barricade and stomps on it, working on it soon after, and continues to work on it until Archer starts to no sell. Archer fires back and hits a lariat and a side slam. Chokeslam attempt. but Anderson escapes, only to get caught a second time but he kicks out. Archer misses a splash and eats a bicycle kick to the corner. Anderson hits the TKO but Archer kicks out. Anderson tries a stun gun twice, but Archer counters it with an inverted DDT. Archer then hits his finish and pins Anderson. Another alright match. ***

Hiroyoshi Tenzan vs. Yujiro Takahashi: This one’s gonna get ugly. Tenzan hasn’t looked bad so far, but he can only go on for so long. Yujiro’s been inconsistent and kind of sloppy lately. Some uninteresting back and forth starts things off. They go into the outside, where Tenzan gets seated and Yujiro nails him with a dropkick. Yujiro takes control in the ring one Tenzan enters at 15 and works on him. Tenzan starts to fight back after a headbutt, but he misses a splash and Yujiro follows with a boot to the corner. Tenzan remains undeterred and starts unleashing the mongolian chops. Yujiro tries to regain momentum by raking the eyes but Tenzan counters with a backdrop. Tenzan misses a headbutt and eats a big boot. He tries for a piledriver but finds no luck in succeeding. Another comeback by Tenzan with the mongolian chops. TTD by Tenzan followed by the anaconda vice and Yujiro taps. Not much, but it was decent. In a sense, it exceeded my expectations. **3/4

Tomohiro Ishii vs. Shelton Benjamin: Shelton dominates early, working on the head of Ishii. It seems that he’s selling the effects of his previous two matches. Shelton misses a splash, blocks a German but gets laid out after. Shelton gets the worse of a forearm battle, but slides past Ishii and locks in an ankle lock. They counter each other, but Shelton gets the better of it. He hits a stinger splash followed by a German for the nearfall. Paydirt attempt, but Ishii blocks it and hits a German. Shelton tries to counter with the dragon whip but Ishii headbutts him instead. Shelton hits the dragon whip, but Ishii no sells, only for Shelton to hit the superkick and follows with the paydirt for the win. Shelton’s racking up some wins this year, that’s for sure. Pretty good, but not great or anything. ***1/4

Toru Yano vs. Tetsuya Naito: Yano keeps requesting to break every time Naito tries to move in. Naito arm drags him and dropkicks him to the outside, but once he exits he gets pelted with a chairshot that busts him hardway. That isn’t fun. Yano undoes the turnbuckle and starts getting the heat on Naito. When Naito starts a comeback, he splashes into the exposed turnbuckle but manages to take him down anyway with a neckbreaker. After some offense, Naito misses a charge into the turnbuckle and Yano slingshots him into the turnbuckle and hits a powerbomb for a nearfall. Naito mounts another comeback, including a German suplex and an inverted DDT. Stardust press, and that’s it. Naito made this a fun match. I have a feeling every Yano match I see for the next two weeks will have the turnbuckle spot. Maybe I’ll entertain myself by hoping that someone thwarts him on doing it. ***

Katsuyori Shibata vs. Davey Boy Smith Jr: They start chain wrestling early. DBS takes him down and pulls in a leglock but Shibata frees himself. DBS eventually doesn’t do a clean break and starts brawling on the outside, throwing him into the barricade but Shibata immediately fights back. Back in the ring, Shibata takes him down to the corner and tries the dropkick, but DBS responds with a big boot. Shibata peppers him with elbow shots and Shibata nails it, but DBS gets his hands up before. Shibata locks in a sleeper, but DBS slams him down to the mat, only for Shibata to lock in another on the ground. DBS fights out of it and grabs the ropes. He takes down Shibata with a powerslam for a nearfall. DBS goes for a move but Shibara grabs his arm and takes him down. GTS attempt, but DBS fights out and hits a lariat then follows with the seated powerbomb for the pinfall. I guess this is a night of upsets. Liked this match, but felt like it needed to go longer. ***1/4

Davey Boy hits a backdrop, but it’s not enough to get Shibata to release the sleeper #NJPW #G124 http://t.co/XRejcNRtYn

Yuji Nagata vs. Bad Luck Fale. Nagata attacks Fale at the start but Fale blocks him off, only to attack him on the ropes and hits a huge big boot that sends him spinning to the floor. That;s a cool spot. Fale eventually starts clubbering him with blows. Fale locks in a camel clutch that sinks in for a while. Back on their feet, they continue to exchange blows. Fale misses a charge and Nagata dropkicks him in the knee and works it over, eventually securing a leglock. Fale fights back, then hits a huge splash to the corner and on the ground for a nearfall. Nagata fires back with an exploder suplex. German suplex, but still no dice. Fale counters and tries the grenade, but Nagata counters it into the armbar. Fale escapes. Nagata misses a charge and Fale uses that to hit a samoan drop and motions for the bad luck fall, gets it, and scores the pinfall. Way better match than I expected, and it turned out being a great match thanks to Nagata. He was so awesome carrying this into a superb bout and succeeded in that regard. ***3/4

Minoru Suzuki vs. Hirooki Goto. A brawl starts in the ring that soon turns to the outside where Suzuki lays out Goto with a seated kick to the chest. Back in the ring, Taka runs in while Suzuki distracts the ref but he gets destroyed. Goto tries the shouten kai but Suzuki powers out and hits a seated big boot for a nearfall, then locks in the sleeper. Goth piledriver attempt but Goto counters. Suzuki gets a slap but Goto blocks anything else, only to walk into a sleeper. Goto looks like he’s totally gone, but he slips out and applies a odd looking rollup technique for the pinfall, fooling Suzuki. This was a really hot match while it lasted, but it felt super short. ***1/4

TAKA tries to interfere, but Goto folds him in half with the Ushikoroshi neckbreaker #NJPW #G124 http://t.co/bGL5fSrRqM

Hiroshi Tanahashi vs. Satoshi Kojima. Tanahashi gets the advantage early with a dropkick that sends Kojima to the outside. But once he starts back in, Kojima cuts him off and begins working on him. Tanahashi cuts him off, but not for long as Kojima hits the diamond cutter. Kojima tries something off the middle rope but Tanahashi blocks it, only for Kojima to give him a lariat sending him tumbling down to the floor. Wow. Kojima throws him back in and hits a brainbuster but Tanahashi kicks out. Kojima teases the lair but Tanahashi hits the waistjacket German suplex for the nearfall. Diamond cutter follows by Tanahashi and goes for the high fly flow but Kojima gets the knees up. Kojima fires back and hits a sidewalk slam but no dice. Kojima misses a lariat but gets it a second time for another nearfall. Tanahashi blocks another lariat but Kojima executes one to the back of Tanahashi’s head. Kojima motions for one more but Tanahashi hits the sling blade and hits two high fly flows for the victory. Super hot match that lived up to expectations. ****

Tanahashi ducks a lariat, but Kojima turns round and catches him coming the other way! #NJPW #G124 http://t.co/S6XF7N41Us

It might just be my internet, but the feed’s been really jumpy all night. Not bad enough that I can’t watch, but very evident regardless. I’ve been ordering New Japan shows since they became available on Ustream and it’s the first time I’m having issues of any kind.

Kazuchika Okada vs. Togi Makabe. Makabe no sells early, but Okada takes him out and they, yes, brawl to the outside. Okada hits a big boot and starts choking Makabe on the guardrail. Seemingly a one sided match thus far as Okada works him over and does a rainmaker pose. This pisses off Makabe, who starts fighting back. Crowd is behind Makabe. He launches a number of lariats to the corner and hits a bridging northern lights suplex for a two count. Another big lariat. They go to the outside where Okada throws him into the barricade, but Makabe responds by throwing him into the guardrail on both sides, which was kinda cool. Okada counters with a kneebreaker followed by the AA and locks in the red ink submission. Makabe struggles and finally makes it to the ropes. Okada with a dropkick and tries to follow with the Rainmaker but Makabe ducks and hits a huge lariat. The kneeling powerbomb doesn’t get it. Spider German attempt, and he gets it after posting him. But the king kong knee drop misses! Okada dropkicks him and tries the tombstone but Makabe blocks it, only to get hit the the German. He then gets up and nails the Rainmaker for the pinfall. Awesome match. ****1/4

The first part of the show was pretty average, nothing to write home about. The second had some fun matches, and the last two matches lived up to my expectations by being completely awesome. You need shows like these so people don’t get too drained by having to bust their ass every night, so that’s cool. It’s very easy to worry about these guys’ well being during these next two weeks. Plenty of fun stuff in this tournament so far though, including tonight, and there’s a lot more to come! 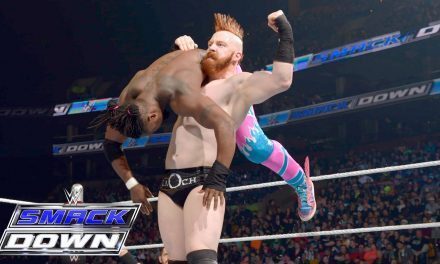