This very well might be record turn around time for a PWG review here at Voices of Wrestling. Don’t worry, it’ll be worth it. I’ve been waiting to cruise through this event since it went down at the end of May.  Also, we here at Voices of Wrestling have been sitting on a MAJOR ANNOUNCEMENT that will send shock waves over the Twitter. But first…here is the damn review of Sold our Soul for Rock ‘n Roll.

The stars are out tonight in Reseda as cast members from TRUE BLOOD are in the audience. Frank Sobotka is in the damn crowd rocking a fucking DRAKE YOUNGER T-Shirt, for fucks sake. Josh Barnett is in attendance, too. The bright lights of Hollywood, people.

Brian Cage vs. Roderick Strong: This was the best singles match I’ve ever seen from Brian Cage. It was great. I guess he’s is currently cutting, so he looks as chiseled as ever, but he’s moving around as good as ever as well. Must be that DDPYoga. Couple it with the fact that he now goes by MISTER GMSI. That is fucking fantastic. Match starts fast and hard hitting and stays that way. Before the bell even rings Roddy jumps the bigger man and tries to keep the pressure on. Tons of reversals of Cage’s usual spots but Cage also throws in a FUCKING 619 for good measure.  The climax of the match comes with Roddy going through his checklist of go-home moves but Cage being too big and strong to keep down until Roddy hits Death By Roderick into the Sick Kick for the win. Crowd was white hot at the start of this show and didn’t let up all of the way through. Match was worked well. Really dug the story they told. ***3/4

AR Fox vs. Rich Swann: Dance off to start. Fox gets served. A bit slow to start during a feel out process before Fox gets the advantage and takes it outside. Fox is a big Ryback fan, don’tcha know? So it’d only be appropriate for him to hit Swann with a Shellshock WiTH THE MARCHING! A lot of back and forth between the two hitting their bigger spots for kickouts. Eventually Swan uses the powers of his ALZ-113 Virus to hock a damn loogie at Fox…gross, which leads to hitting a Lethal Injection and the Phoenix Splash for the win. Crowd was hot. You got your expected spotty affair that got fun quickly. A few down points in the match kept me from fully investing, but I dug it. ***1/4

Best Friends vs. The World’s Cutest Tag Team: Candice is lookin pretty good tonight. I can see the lace of panties. Despite all of that…Chuck Taylor is a gentleman…a KENTUCKY Gentleman…and he would never lay a hand on a woman. However, the crowd demands Candice gets her ass kicked, because…Equal Rights, yo. Joey Ryan kicks things off with Trent only to build up to the cheap pop to tag in Candice. They continue to play up the idea that Taylor won’t hit Candice until he eventually gets slapped and told to fight. Chuck storms off only to return a few minutes later as Sexy Tranny T. Business picks up as Sexy Tranny T stomps a Kentucky mud hole in Candice. Joey gets involved and it becomes a back and forth affair with big spots and near falls. Eventually, Joey and Candice deliver a boob-plex and dick-plex respectively to Taylor and Trent that leads to the Superkick-ReverseRana for the win for Joey and Candice. This was entertaing, it just wasn’t a great match. **3/4

Alex Koslov vs. Rocky Romero: Cold War Powers EXPLODE as the Cuban Missile Crisis, Rocky Romero faces off against the runner up for the Russian Gold Star Medal Alex Koslov. I’m often intrigued by “friendly” matches between tag partners. However, they never end up any good. Anyway…these two must have to kill a lot of time because it takes forever to get really going. A ton of playing off one another and playing to the crowd. Some token Hooligan spots that were thwarted by the other guy. A lot of back and forth submission attempts from about mid-match on. Rocky eventually gets pissed and they start slapping the shit out of each other before Rocky grabs an arm and cranks back into a crossarmbreaker for the win. Not that bad of a match, but it seemed quite long. **3/4

ACH vs. Ricochet: I’m all in on this one. ALL-IN. Flips on flips on flips. They tell a great story here. ACH, the young upstart, tries to show off and be cute against the best high flyer in the world, only for it turn into one hell of a back and forth affair with a ridiculously aggressive Ricochet getting fired up early on to put the young upstart in his place. Loved the gamesmenship as well as the sport of this match. Great psychology built throughout. Its got all that plus the damn flips. A lot of really fun spots and transitions here that I won’t spoil for anyone. Awesome finish, too. ****1/2

Mount Rushmore vs. Johnny Gargano, Trevor Lee, and Cedric Alexander: Gargano is the replacement for Andrew Everett in this match. If you didn’t watch the threeway match at Mystery Vortex II with Everett, Lee, and Alexander, you missed a bit of a treat. Everett suffered and injury, so they shuffled the card around and this is what you get. The start of this match is hilarious. Nick Jackson is playing his belt as a guitar while Cedric Alexander and Kevin Steen push and spit on each other. WTF? What follows is PWG Trios match Madness awesomeness. Everyone got all of their shit in. There was visible intensity and animosity in the match. The moves, spots, and transitions were all crisp. The big spots were done really well. Some ridiculous bumps were taken, especially by Trevor Lee. If you aren’t familiar with Lee, go seek some stuff out because he is proving worthy of a PWG performer. This is one of those PWG Trios Madness Specials where everything comes together and works so damn well. I’m not going to spoil any of it…just go see it. ****1/2

Afterward, Steen grabs the mic and gives a vague Goodbye speech that ends up being an announcement that he’ll be going to IHOP after the show and not a single motherfucker is invited. Classy.

Adam Cole (c) v. Kyle O’Reilly – Knockout or Submission Match: These two guys have wrestled countless times across the country in numerous promotions with some very good matches in this never ending saga.  All told, when you end up having matches like the Hybrid Rules match at ROH a few years ago as well as this one…its been a damn good feud for the former FutureShock tag partners.  It isn’t often you see two former partners come in together, rise up as a team together and once they break up, equally rise to top of the Indy scene.  You’ll be seeing both of these guys on Monday Nights sooner rather than later.

This is a rematch from Kyle O’Reilly’s title match from winning BOLA13 at Matt Rushmore. BIG MATCH FEEL. Riles looks intense. The promo Adam Cole delivers at the beginning of this match is so ridiculous, its awesome. He’s Shawn, O’Reilly is Marty. He’s Batman, O’Reilly is Robin. He’s the Green Power Ranger, with all of the muscles and cool gold shoulder pads, who is banging the Pink Ranger, and O’Reilly is the sexually frustrated Red Ranger. I think what he is saying is that he is better than O’Reilly…

This match is a strong blowoff performance for these guys. The stipulation didn’t play as big a part in the false finishes, but it was base for the construction of the match. Cole attacked O’Reilly’s leg all of the way through while Riles worked over Cole’s arm. A well consctructed slow build by these guys before they hit max volume and once they do, the crowd is hot. Mount Rushmore hits the ring and get the crowd really hot. After O’Reilly hits his missile dropkick off the apron on The Bucks and Steen, Cole superkicks O’Reilly only for THE ACT OF DEFIANCE. O’Reilly throws his mouthguard into Cole’s face before going HAM. Two brainbusters into the Danielson Chest Stomps into the Triangle Choke for Cole to tap and the Reseda Crowd pops.

This was the culmination of the rise of two of the Indy’s best talents. Cole took PWG over as the heel champion that he then took to ROH. During Cole’s rise, O’Reilly has consistently put on the best matches in PWG over the past two years. Cole would go on to become the longest reigning PWG Champ in its history while O’Reilly, still a bit underrated around the country, became the hottest babyface in the company. This blowoff was a worthy one. Was it perfect…nah. But I enjoyed it and it is about time Kyle O’Reilly got a singles title. He is one of the best in the business right now. He brings a hybrid MMA-Jiu Jitzu style and blends it with Pro Wrestling not not many others can do. I’m a mark, bro.

Top to bottom, will be one of the best American Indy shows of the year. A lot of fun in the opening group of matches. A bit of a lull with the HOOLIGANS EXPLODE match, but finishes strong with three straight ****1/2 matches that give you all that PWG has to offer.

Next Up: Celebrating their 11th Year on Planet Earth, PWG brings you their 11th Anniversary Show ELEVEN July 26th. Newly crowned champ, Kyle O’Reilly is set to take on Chris Hero. Also, in what very well may be his final match in the company, Kevin Steen faces Trevor Lee. Look out for a Number One Contenders match as Adam Cole, Johnny Gargano, and Roddy Strong faceoff. Frankie Kazarian already returns to PWG to wrestle Brian Kendrick.

We here at Voices of Wrestling love getting you fucks involved. We also love giving away free shit.  To top it off, Joe Lanza and myself are also chronic gamblers.  So, because the G1 Pick’em was such a ridiculous success, we’re going to do it again. To coincide with the HUGE Battle of Los Angeles Tournament taking place from August 29th to 31st, we’re going to do a BOLA14 BRACKET POOL and the winner gets free PWG shit.

Keep following @VoicesWrestling for more details coming in the next few days.

What is the best wrestling site on Planet Earth?

Voices of Wrestling you say? 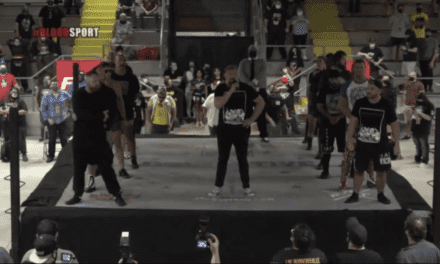 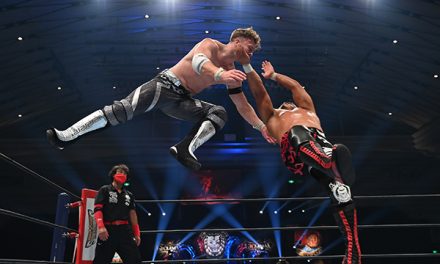