Ladies and gentleman, it is the dawn of a new era. I, Robert La’Da’Mien McCarron, am here to help you get through this one hour of WWE programming that is quickly becoming the most must see show in WWE history. Quickly, I say. You can tell it’s becoming more of a priority for WWE by the way this show began – PROMO BATTLE~!

Paul Heyman and Cesaro, in the ring, opened this week’s Main Event with TALKING. Cesaro was dressed to wrestle, but SWERVE, he won’t be. His match with Dolph Ziggler is off due to an eye injury Cesaro suffered at the hands, literally, of Kofi Kingston last night on Raw. Cesaro, protected by an eyepatch, stood in the ring angry yet focused. Heyman cut to clips of his surprise loss to Kofi last night, before Dolph Ziggler interrupted. Dolph said that it wasn’t too long ago that he won Money In The Bank, and at Battleground, he’ll be on top again. Big E was next to the verbal fray. Big E, speaking still in his preacher cadence, said words about also being in the battle royal. Out next were RybAxel. The Ax Man and The Big Guy are in the Battleground IC Title battle royal, also. Guess what, they won’t be stopped, Axel says. Co-IC Champs coming! RVD was out next, making a jab at Ryback for stealing his ring gear. RVD said they’re all good… reaaaaaally good. RVD was doing his thumb pose when Ryback attacked him, and a very brief all out brawl took place. The good guys dumped Rybaxel out of the ring, as the announcers made the hard sell for the Battleground Battle Royal of Championship Chaos.

Video Package: Tom Phillips and Byron Saxton cut to a video package on one of last night’s surprise returns: The Miz and Chris Jericho are back! The Wyatts attack on Chris Jericho lead into our next scheduled bout…

Luke Harper & Rowan (The Wyatt Family) vs R-Truth & Xavier Woods: Wyatts defeated Truth & Consequences. The Wyatts new music, by the way, is awesome. Love it. Love the music, love the in ring, love the atmosphere for their matches, love the reactions… I tell you, the Shield’s breakup would not have been so easy to swallow if the Wyatt Family wasn’t around to continue being awesome. Truth and Woods, however, are not awesome. Due to their lack of awesomeness, they were defeated rather easily tonight. The finish saw Luke take Truth out with a superkick, leaving Rowan alone with Woods to nail the Side Effect for the pinfall victory.

LET’S REVIEW A MATCH WITH THE WOMEN!: Funkadactyls beat Nikki Bella & Alicia Fox in a divas tag. This was supposed to be a rematch from last night in a handicap, but crazy Alicia Fox came out to be Nikki’s partner. Cameron continued being all about herself, while Naomi looked like a nerdy girl who was sad that the popular girl wasn’t so nice to her anymore. Alicia was the biggest cheerleader on the apron you’d ever seen, until Nikki went for a tag. Nikki tried, but Alicia turned, or stayed, heel and refused to tag. You can’t trust this goofy woman! Alicia acted sorry afterwards, but her lack of a tag in allowed Cameron to pin Nikki.

Backstage: Sheamus challenged anyone at all to step in the ring with him on Smackdown in a 4th of July Challenge. Alberto Del Rio stepped up, and we have a US Championship match for Smackdown.

Video package: John Cena is the new champion, and the Authority is not big fans of that. 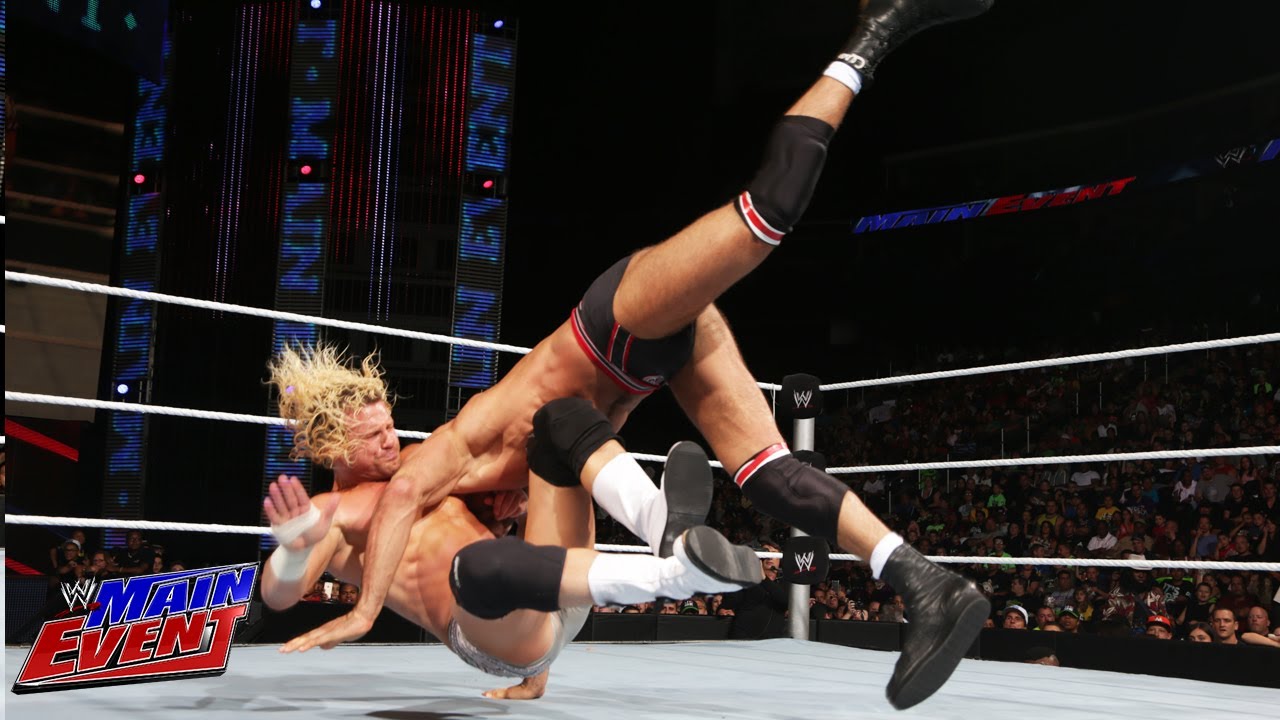 Backstage: Renee Young asked if Paul Heyman is keeping Cesaro out of tonight’s new 6-man tag main event. Paul said Cesaro is a fighting champion, unlike everyone else seemingly in WWE. Paul said when Cesaro wins the IC Title at Battleground, he’ll give a victory speech in five languages.

Eden was doing the ring announcing tonight on the show, and she is just stunningly beautiful. Good for Stardust.

Six Man Tag Team Battle: Dolph Ziggler & Rob Van Dam & Big E defeated Cesaro & The Ryback & Curtis Axel in a six man tag. Cesaro sold his eye during the bout, playing up his eye injury from last night. It looked like he was having a very tough time keeping his right eye open. Byron was playing up what a fighting hero Cesaro is, battling with this eye injury. Paul Heyman at times tried to keep Cesaro out of the ring, saving his client for the big match at Battleground. Like usual lately, this was a slower paced match for the most part. It went over ten minutes, but picked up at the end as these matches are destined to do. Ryback went up to the top rope at one point to splash RVD, but silly rabbit, Trix are for kids. RVD moved, of course, and this lead into Dolph getting a hot tag and the action picking up. After a minute of a flurry with everyone involved, Dolph finished off Cesaro with a ZigZag. Paul Heyman looked stunned. Don’t know why he would be. After all, Dolph is here to SHOW THE WORLD!

THUMBS UP! I am a believer in not rating shows segment by segment. Not every segment is going to be a home run, and some are meant for more long term build while some are there for the short term entertainment. Some may rate a squash Wyatt Family tag as sub-3 stars. Well, if the match and segment does exactly what it is supposed to do, and is fun while it last, who is to say we shouldn’t give it 5 stars versus 1 star. So, I rate the show overall when it is over. When the hour is done, how’d I, or you, feel about the show. This show, anyway, I give a thumbs up. The action was good, and most of the hour really tried to push big the Battleground IC Title battle royal. I won’t complain when we get good, and varied, action and a true build for a pay-per-view. Plus, a dominant Wyatts match is buys. So there you are, one hour down and many to go as we journey through WWE Main Event on the WWE Network!

Featured Video “The return of Y2J!”