This week on ROH television we get a snippet of the acclaimed Global Wars card. As always Kevin Kelly and former ECW World Champion Steve Corino are on commentary. A hot crowd in Toronto, Canada sets a tone of excitement for what should be a thrilling hour of wrestling. Let’s get straight to the action with the Roderick Strong taking on Cedric Alexander.

A nice video package detailing the events leading up to the match highlights one the best booked angles of the year thus far in ROH. In January Strong took offense to Alexander using a backbreaker in a win over Andrew Everett. Both men began to claim they had the best backbreaker in the company. Strong and his pals in The Decade began to claim that Alexander was not adhering to the code of the locker room. Following a Strong win over Alexander in New Orleans the Decade assaulted the rising youngster and insulted his family. Cedric got his revenge by costing Strong a match against Tomasso Ciampa which led to Alexander challenging strong to a match in Toronto.

Cedric Alexander vs. Roderick Strong: Roddy gets right to business by calling out Alexander to come straight to the ring. Cedric obliges and power walks straight to the ring. He and Roddy trade punches before Alexander throws the former ROH World Champion to the floor. Seconds later Alexander “crashes and burns” in the words of Steve Corino by hitting a suicide dive to the outside. Alexander beats Strong down with a few shots to the guardrail and bounces his head off the ring apron before throwing him back into the ring. Back in the ring Alexander backs his rival into the corner and hits him with a few chops and punches. Roddy finally manages a comeback with a knee to the gut and some chops of his own. An Irish Whip leaves Alexander dangling from the top turnbuckle by one knee. As the show goes to its first commercial break Strong punishes Alexander with a series of hard strikes.

Strong is still in control as the show comes back from the break. Seconds later Alexander hits a desperation spinning kick to the head which leaves both men down. The referee starts the ten count but both men beat it and are back to exchanging blows. Alexander gets the better of the exchange and beats Strong down with a series of head butts. A springboard clothesline by Alexander gets the first near fall of the match. Cedric gets another near fall with a sit out Michinoku Driver. The momentum falls back to Strong as he hits Alexander with one of his signature backbreakers followed by another close two count. Alexander reveres another backbreaker attempt into a crucifix pin for another two count. Roddy returns the favor with a stiff shot to the mid-section. Strong goes for the kill by placing Alexander on the top turnbuckle. Alexander struggles put Roddy dazes him with a quick flurry of strikes followed by a beautiful superplex that only gets a two count. Strong immediately applies the Stronghold. Alexander makes it to the ropes and counters into a pinning combination for another close two count. For the next minute or so both men exchange fast and hard strikes. Alexander wins the exchange and hits a springboard kick to the hit which only gets a two count. Cedric then catches Strong with Lumber Check but Strong gets his foot on the ropes to continue the match. Roddy appears to regain control with a flying knee strike and looks to put away Cedric with a Gibson Driver. Alexander reverses into a small package for the 1-2-3!
The match started pretty hot and slowed down pretty quickly as Strong got a chance to bully his younger opponent for a few minutes. Things really picked up near the end of the match with some nice strike exchanges and of course backbreakers. Alexander really looked like a star in this match as he kept getting the better of Roddy, who could not quite keep him down. I’m ok with the small package finish because Strong took a second to be cocky and it cost him. *** ½

After the match The Decade hits the ring and lays the boots to Alexander. Jimmy Jacobs slides a few chairs into the ring. Once they are set up Strong KILLS Alexander with a suplex slam through the chairs as the show goes to another break.

ROH World Championship, Kevin Steen vs. Adam Cole (c):  This is Steen’s rematch for the title he lost to Jay Briscoe over a year ago. The Toronto crowd gives him a partisan reaction and a huge streamer bath. The champion comes out to a hostile reaction but is beaming with confidence. Big “Kill Steen Kill” chants during the introductions.

The Code of Honor is followed but both men look rather aggressive with their grips. Both men trade punches to start the match. Steen takes control with a back elbow that knocks Cole goofy. “Mr. Wrestling” sends the champ back to the canvas twice more with some feisty chops. Cole ducks a third chop attempt and hits Steen in the knee with a drop kick. He follows up with a few stomps to the knee for good measure. Cole goes for the Figure Four but Steen reverses and sends Cole through the middle ropes to the outside. Both men change positions and Cole tries a spring board cross body. Steen dodges and the champ misses everything. Steen blows a kiss to the camera as the show goes to another break.

We are back and catch Steen slamming the champion groin first into the ring post. Cole’s sells it like only he can. The look on his face is priceless. Steen obliges to do it a second time in response to chants from the crowd. Poor Adam Cole. Steen goes for another nut shot but Cole flips out and sends Steen into the post face first. Cole goes for a punch but Steen ducks and sends Cole testicles first into the post for the hat trick! To further Cole’s misery Steen pulls him back into the ring and does the old mounted punches in the corner trick before biting the champion. As Steen celebrates on the turnbuckle Cole takes advantage and super kicks him in the knee. For the next few minutes of the match Cole works over Steen’s knee. “Mr. Wrestling” finally finds an opening and buy some time to rest after he hits Cole with a rope hang DDT. Cole slinks to the outside and crotches Steen on the ring post. He adds a few shots to the knee to inflict more damage. “The Forever Champion” then locks in a Figure Four around the ring post as Steen writhes in pain. After Cole breaks the hold at five he goes out to get Steen who hits him with a power bomb on the ring apron before collapsing in pain. Both men are down as the show goes to its final commercial break.

Steen is perched on the top rope as the show returns from break. He hits Cole with a senton bomb that results in a near fall. Cole reveres an F-5 attempt and drops Steen’s neck across his knee from a firemen’s carry position. Steen kicks out of a pin attempt at 2. A super fisherman’s brain buster by Steen only yields a two count. With Cole laying prone in the corner Steen charges for a cannonball but misses and hits his knee on the ring ropes. Steen goes for the Package Piledriver but his knee gives way and goes lock in the Figure Four. After a few moments Steen reveres the hold and Cole has no choice but to break it. For a few moments both men jockey for position before Cole mule kicks Steen in the knee. He hits the ropes and finds himself on the canvas via a Steen powerbomb. Seconds later Steen has Cole locked in the Sharpshooter! He can only lock the move in for a few seconds before collapsing in pain again. A sleeper suplex only gets Steen a two count. Steen goes for the piledriver one more time but Mike Bennett charges down to the ring only to get knocked out by a punch from Steen. To keep Bennett down Steen uses the piledriver but grabs his knee in pain. Cole pops back up and hits him a superkick and a release German. A Florida Key only gets two. Cole goes for a Florida Destroyer but eats a back drop from Steen. Steen slaps on the Sharpshooter but Cole makes it to the ropes. Steen tries a last ditch Brainbustaaaaa but only gets a two count. To finish Cole Steen goes back for a piledriver but Cole escapes, hits a superkick and gets the three count.
The first time I watched this match a few months ago I thought Cole kicking out of all of Steen’s big moves really hurt the match. Upon a second viewing it makes sense that he would kick out of a few. Every time Steen hit a big move it would hurt his knee little by little and he would pause to give Cole just enough time to kick out. I loved the work Cole did on Steen’s knee during the match. Steen sold the knee perfectly and even collapsed a few times in pain for a nice dramatic effect. I also liked the story of Steen never getting to hit his ace in the hole, the Package Piledriver. The one time he hit it was wasted on Cole’s running buddy Mike Bennett. Very good match and one I am upgrading from *** ¾ to **** ¼.

ROH gets a lot of criticism for airing these kinds of matches for free. I see the logic. You want fans to pay for the big matches. Still, I won’t complain about getting to see great wrestling for free. This week’s show is one that any fan will want to go out of their way to see. Alexander and Strong was a very good match. I encourage anyone to check out the entire feud. Cole vs. Steen was an excellent ROH World Championship match. Steen was his usual self and Adam Cole added another match to an impressive list of wins during his reign. 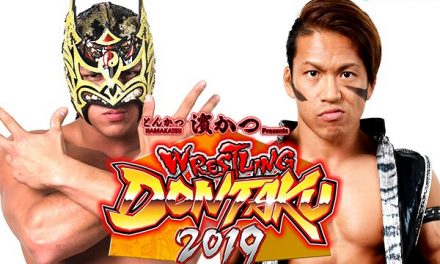