Mystery Vortex is back and rumor has it, this will become an annual event for the PWG. For those of you not familiar, the whole gimmick is that PWG doesn’t release a single match on the card. (Sidebar – Check out Rich and Joe’s latest podcast for their rantings on that subject) Nevertheless, Mystery Vortex I was a success for the promotion and they are back and the Reseda crowd was thirsty for more…wait…were they?

Prior to the show, Southern California felt a few earthquakes. Of course, the show started late, but that isn’t abnormal for a PWG show. It isn’t unusual for a 9:00 p.m. PST bell time to start close to 10:00 p.m.. Hey, it happens. However, on this show, a usual perma-hot Reseda crowd was up and down all night. Not the end of the world, but just reporting the facts here at Voices of Wrestling.

On to the show…

Cedric Alexander vs. Andrew Everett vs. Trevor Lee: What a motley crew of characters for today’s opener. Cedric Alexander, of ROH-fame, returns to PWG after a long absence and plays the crowd favorite face here. Andrew Everett is the former Chiva Kid and is the flippy bastard that will get the big pops. And Trevor Lee, a mid-Atlantic Indy guy plays up a heel gimmick here. The latter two are n00bz to the Guerrilla. They start with a fast pace with the token back and forth before it breaks down into rotating one-on-ones. About mid way through, the n00bz really pop the crowd. Everett with a sick hurricanrana that plants Alexander head first into the mat. Lee going airborne outside. Then it was Everett’s turn to do what he does best, which is use his body as a missile, launching himself out of the ring. Crowd is insanely hot mid-way through. Moreso than in usual PWG openers. Alexander, too, gets his time to shine during a hot, crisp stretch before a near-fall slows things down, BUT NOT FOR LONG! Lee and Alexander with a huge crossbody-reverse spot made me get up out of my damn chair. Andrew Everett eventually picks up the pin over Alexander with the most amazing shooting star press you’ll ever see. Crowd with a huge “PLEASE COME BACK” chant. Damn right he should. Both new guys got themselves over big here. Crowd adored it. The match was one of the best PWG openers in a while. ***3/4

B-Boy, Willie Mack & Joey Ryan vs. Peter Avalon & the RockNES Monsters: The beginning of this match has an old guy holding a plunger and threatening Joey Ryan not to use the N-word. Yup. Anyway, Johnny Goodtime breaks up the intros and it’s a melee from the jump. The match is good fun while its just a bunch of PWG madness. Once it goes back to the traditional tag team format, it loses steam. A Willie Mack tag in picks up the pace and a few fun double team moves by the faces lead into another melee. Eventually, Joey Ryan pins Pretty Peter. This one was fun when it was your usual PWG insanity. However, there was a dull traditional tag portion of this match that lost me a bit and the ending fell a bit flat for me. **3/4

Anthony Nese vs. Roderick Strong: The opening of this match puts most of the Reseda crowd to sleep. They stay in a nice slumber throughout. Justifiably so. It violates the cardinal sin of a PWG match, it’s boring. It’s also ever-long. Roddy eventually wins with a Sick Kick followed by the Strong Breaker. With all that said…its not awful. It is pretty decent, just really really boring. **

African American Wolves vs. Inner City Machine Guns vs. Unbreakable F’N Machines: If this is anything less than a legitimate match of the year candidate, I’ll be disappointed. The introductions for the “urban” based teams always get a big pop out of me. Dance competition to start. Ricochet gets served by Elgin doing the worm. It happens. Now we get to the action with Elgina and Ricochet. Its fast paced and crisp. The opening sequences of the match are equal parts well-done, well-paced, and cheeky with all of the teams getting runs in a traditional tag setting. And then Brian Cage does a moonsault off the top rope to the floor. Yes he does. And then there is a legitimate, two-minute vertical suplex spot. Now, I’m not opposed to the spot, it can be fun. Unfortunately, here it took the wind out of the crowd and the momentum of a potentially great match comes to a dead stop. Everybody gets their shit in eventually. The Unbreakable F’N Machines win with a Buckle Bomb-Elgin Bomb combo to Fox. They really tried getting to that match of the year spot. It just lacked that high-end crescendo. The middle portion of the match also took a ton of steam out of it. This match needed a ladder, The Young Bucks, or both. ***1/2

Chris Hero vs. Tommaso Ciampa: For the second time tonight, a match opens up to a dead crowd. Reseda eventually start to entertain themselves. This match is slow to warm up. Ciampa acts a little crazy. Hero emphasizes his strikes. You know, playin to da gimmicks. Eventually, this breaks down to a hard hitting bout with a ton of striking. Knees, elbows, fists and feet fly everywhere. Hero reverses Project Ciampa, hits the rolling elbow, Ciampa kicks out, only for Hero to slap on a Hangman’s Clutch for the tap. A little long and it took a while to get going, but this match ended up being a decent strike-fest. Something just felt off about it though. **3/4

Johnny Gargano vs. Kyle O’Reilly: If you’ve ever read any of my PWG columns, you already know — there is no chance I don’t like this match. Gargano and O’Reilly are two of my favorite American Indy workers right now. I’ve been on board with these two for a few years now. Anyway, this is essentially a number one contenders match for the PWG Title. Drake Younger won at DDT4, but is off to Florida at this point. On to the match, opening sequence is a feel out process. Mat work, a few strikes, an attempt at each finisher with appropriate counter. You know, the usual. Then some fun and games that ends with a slap fight. Now its go time. O’Reilly works the arm with constant submission attempts. The psychology here is nice and Gargano sells the arm well. Back and forth contest in the mid-portion of the match. Everybody gets their shit in without it seeming forced. The counters and transitions add a nice dimension to this match. Smart and effective. O’Reilly locks on the cross armbreaker for the tap out win. If I had one critique, its the ending felt a bit abrupt. Really well done match though. ****1/4

The Young Bucks (c) vs. The Best Friends: Here is your payoff to the DDT4 victory by the Best Friends. Best Friends take an early advantage by way of Matt Jackson’s injured hand. They even bring out the trenchcoat early. The Bucks then take over. Some accidental Buck on Buck violence lead to the Best Friends taking advantage of the situation. Hot tag to Chucky T keeps the momentum going for the Friends. Back and forth late. Ref bump before the madness ensued. A few false finishes before Rick Knox comes down, which leads to Adam Cole coming down and interfering. Bucks pull it off late. It was ok. ***

This bleeds into a Mount Rushmore promo, where Cole issues an open challenge. Its answered by none other than CANDICE LERAE!!

Adam Cole (c) vs. Candice LeRae: We’ll just get this out of the way now, I would do dirty things to Candice. Very dirty things. Anyway, this match is what you’d think it’d be. The flurries of high tempo, big move offense that gets the Reseda crowd off their feet for Candice that hits sometimes but Cole gets the upperhand more often than not. Hope spot that is stymied. Rinse, repeat. Throw in a semi-long heat sequence mid-match for Cole. Rick Knox defiant referee gimmick leads to a near fall. Then some banana peel shenanigans before the reverse hurricanrana by Candice. She then hits the Panama Sunrise on Cole for the near fall. “YOU CAN’T BEAT HER” chants rain in from the crowd. Cole eventually hits the straight jacket suplex to a flat reaction. At least we found out Candice was wearing black lace boyshorts. **1/2

Candice gets a round of applause and a little respect from Cole before he clotheslines her. The Bucks come down to beat up a chick. Joey Ryan clears the ring with a chair. Show is over.

Overall, a very mixed bag. Awesome opener, a mild match of the year contender, some same’ol type of matches, and a snoozer. The earthquakes that took place prior to the show must have taken some life out of the crowd. They were hot early. Fell off mid-way through and never really bounced back. Some of the matches suffered from it. Seek out the opener and Gargano/O’Reilly. You can miss the rest.

Next Up: Kyle O’Reilly gets another shot at Adam Cole and the PWG Title in a Knockout or Submission Only Match, which is sure to be must see wrestling at SOLD OUR SOUL FOR ROCK ‘N ROLL. 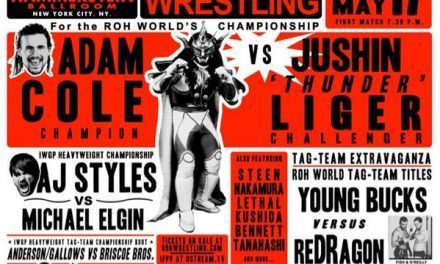