With the finals of New Japan Pro Wrestling’s 21st Best of the Super Juniors tournament set for this Sunday, I wanted to take a look at the history of the tournament and some of the standout performers, statistics and oddities associated with it.  A tournament once regarded for featuring and kickstarting the careers of some of the world’s top wrestling stars (most notably Chris Benoit, Eddie Guerrero), the tournament has settled into more of a “Best of New Japan juniors plus a few other promotion’s guys). With that said, this year’s tournament has stood out as one of the better in-ring tourneys in quite some time and with days left to go, all but two wrestlers (Nick Jackson and the injured Alex Koslov – see note at bottom of story) have a chance to win.

Anyway, we’ll have previews and results of the finals of the tournament up early Sunday morning that’s not why you came, you’re looking for all sorts of fun facts and history.

First off, I will not be using the 1988 Best of the Super Juniors tournament in this data, this was before New Japan settled into their current points system. The eventual champion Shiro Koshinaka ended with 41 points, those familiar with today’s tournament know guys at the top hover around 12-16. It would’ve killed the averages and total points had I added these guys so we’ll begin with 1991 when the tournament became a regular, every year thing. Also note that there have been numerous point changes throughout the tournaments history, in some years one point would be awarded for a win and zero for a loss or draw. Compared to today’s point system where a win is worth two points, a draw is worth one and a loss is zero. Wrestlers participating in the tournaments with the lower scoring will have lower overall points. I toyed with either eliminating those or working out a system to give them relative credit but we’re just having fun here, it’s not worth the amount of work that would take so just be aware of this change.

Lastly, the 1996 Best of the Super Juniors tournament had sketchy results and some of the scores of wrestlers are unknown, instead of allow them into the dataset with a question mark or a zero, they were eliminated and everyone who had unsure scores (per Wikipedia’s BotSJ page) are not counted.

That’s all for the house keeping, let’s get to the numbers!

This result shouldn’t come as a surprise to anyone, Jushin Liger IS Mr. Best of the Super Juniors with an amazing 166 total points, well above 2nd place, he’s simply in a class all his own:

Of course, this is a raw number and doesn’t take into account the amount of times someone appeared in the tournament. We’ll expand on this in a bit.

It’s hard to only get 1 point in a Best of the Super Juniors tournament but these five men managed it during their one and only appearances. There was a 12-way tie for 2nd place with 2 points with 11 of these men only particiating in one tournament. A special distinction has to go to Hiromu Takahashi who accumulated those 2 points over the course of two tournaments. Impressive.

One of the issues with only using raw numbers is the more appearances, the more raw points you accumulate and as we see from this list, that’s all that sometimes counts. The top five here is exactly the same as most points with one exception, Minoru Tanaka (Heat/Minoru). Tanaka ties Taguchi with 10 overall appearances but only accumulated 60 points, ranking him 7th overall (Pegasus Kid/Wild Pegasus/Chris Benoit places 6th with 64 points).

Despite appearing in only the third most total Best of the Super Junior tournament, Koji Kanemoto is the runaway winner with the most finals appearances. The next three are familiar names for the first half of this list, guys that were in a ton of tourneys and are some of the more synonmous names with the tournament. However, Prince Devitt sticks out with three finals appearances in only seven total appearances. More on that a later.

Again, Kanemoto and Liger dominate this category but we get a few new names in there, Devitt as mentioned had a high percentage of finals appearances and he has an even higher percentage of championships with two titles in seven appearances. Devitt pales in comparison to Pegasus Kid/Wild Pegasus (aka Chris Benoit) who has two championships in a mere six total appearances.

Let’s start looking at percentages here, these raw number statistics are great for legacy purposes but don’t tell us much other than be in a lot of tournaments and you’ll have opportunities to win or be in the finals. Not taking anything away from Liger, he’s absolutely the man and no doubt Mr. Best of the Super Juniors but I’m more interested in efficiency.

Now we’re getting interesting, Low Ki takes our top spot when looking at average point total, the issue with him — he only has one appearance. The same for Super Delfin and Ultimo Dragon, thus one good tournament and they are going to score very well in this particular category. Let’s change the criteria a bit and make it at least three tournament appearances. This will also eliminate Davey Richards and his two appearances.

Now we get a little more interesting, as we have Chris Benoit and Kota Ibushi tying for the top spot. Benoit’s legacy speaks for itself and Ibushi’s recent momentum points to a potential superstar down the road. Dean Malenko went on to have a great career in North America with World Championship Wrestling and WWE. The most interesting person on this list is Kenny Omega who finishes fourth but is certain to move up after this year’s tournament. He’s currently still alive with as good of chance as any to make it to the semifinals. I’ll be very curious where he’s at on this list after Sunday.

Low Ki, Super Delfin and Alex Shelley are your Best of the Super Juniors Mr. Efficiency award winners. When they join the tourney, they are going to finals. Now granted, each only has one appearance in our dataset (Shelley is in this year’s tournament) so that skews it a bit, however it’s telling they were catapulted to the finals in their sole appearance. Kota Ibushi is a fan case with two finals appearances in 3 tries, but the most fascinating is Koji Kanemoto. Despite participating in 15 tournaments, accumulating 104 points, the man has appeared in 8 finals. Over 50% of the time he’s in the tourney, he was going to the finals. That’s remarkable.

A Milano Collection AT appearance and for good reason, two tournament appearances and one championship. Not bad at all. The most interesting case here is Prince Devitt, you may be scratching your head and wondering why he isn’t higher (I was too). Believe it or not, Devitt has seven tournament appearances, however, two of the appearances he logged zero points due to an early withdrawal. I briefly considered eliminating those from the dataset, but I’m not sure that’s very fair so here’s what we have. You can take some solace in the fact that IF I were to throw those out he’d still be at 40% so Milano Collection AT would still be our top dog.

Poor Jado & Gedo, but hey, you can’t give yourself the glory, this isn’t 1999 WCW. Gedo at least got to a finals whereas Jado never sniffed a final. Otani is a fun inclusion here with eight total appearances and no championships, but two finals appearances so it’s not all bad.

Jado also has the distinction of the lowest average total points of anyone with more than two appearances (3.89), that’s awful. Right behind him is Dr. Wagner Jr who averaged 4.00 points in his five appearances. Minoru Tanaka/Heat is another fun case with a fairly low average of only 6 points, yet in his 10 appearances he has two finals trips and a championship.

Special thanks to reader Kevin Conway who pointed out while yes, technically Jackson and Kozlov are the only guys truly eliminated from this year’s Best of the Super Juniors, the scenarios that need to happen eliminate a few others. Here’s his email to me about the subject:

“This is a massive nitpick and probably not even worthy of a correction, but I geeked out today and tried to run through all the possible scenarios, and I believe it’s also impossible for Taka Michinoku, Mascara Dorada, Matt Jackson and Ryusuke Taguchi to advance to the semi-finals.

This is assuming that head-to-head ties in points are broken by looking at who won the group match between the two wrestlers, and that multi-way ties in points are broken by seeing who won the most matches among the tied wrestlers (and I think, historically, that’s the way that ties are in fact broken). Like, for example, I know it’s possible for Mascara Dorada to finish tied for second place in Block A with 8 points, but when you look at his group stage record against the wrestlers that he would end up tied with, he wouldn’t end up advancing.

Note that there are some scenarios where it’s impossible to determine who would advance, e.g. if Tiger Mask 4, Taguchi, Taichi and Romero all win their final matches, you get a 5-way tie for first in Block B with all 5 of the wrestlers involved having gone 2-2 against one another in the group stage. Since the tournament is worked, I’m just assuming that those scenarios won’t happen.

Block A breaks down like this:
Block B is a lot more complicated, but if you ignore the possibility of draws, it goes like this: 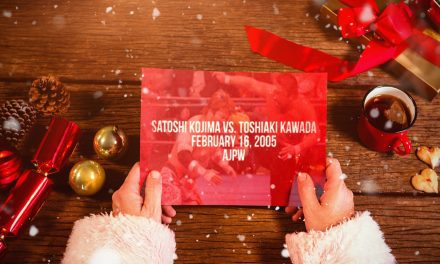 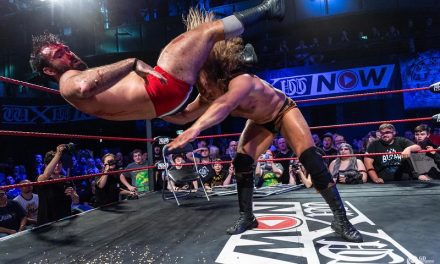