The Super Juniors tournament is in full effect here tonight as the juniors continue to try to rack up wins in order to make to the finals this weekend. Will Alex Shelley make it to the finals again? Will BUSHI, who picked up the huge win at the Yokohama Arena show advance far? Will Ricochet or Kenny Omega, the two big outsiders this year make it big? A lot of interesting questions for tonight’s show. And while none will probably be answered, at least we’ll see some good high flying action tonight.

Taichi vs. Rocky Romero: Taichi jumps Romero as he comes out and we have a brawl on the outside. He attacks Kozlov, who’s seconding Romero, and works on his injured shoulder. Taichi works on Romero for a long, uninteresting time but Romero wakes up the crowd by sending him out of the ring and hitting a huge suicide dive. Romero works on him a while, but taichi mounts a comeback and takes off his pants. Doesn’t last long as Romero mounts a comeback, but the ref gets bumped and Taichi uses that to take out Romero and use his cane…but nope! Kozlov comes in and low blows Taichi, letting Romero hit a modified tombstone piledriver for the victory. The first few minutes were boring as hell but the rest was pretty good. **1/2

Nick Jackson vs. Tiger Mask IV: Matt immediately distracts Tiger Mask at the bell, but preserves though and starts an offensive. Nick cuts him off with an eye rake, in which he takes a bump at. I thought that was weird. Matt tries to interfere again but Nick accidently superkicks him. Tiger Mask hits the tiger bomb for a nearfall and goes to the top but there’s Matt again.  Nick works on him, including hitting a springboard facebuster. Goes for a 450 splash but Tiger Mask gets the knees up. Tiger Mask makes a comeback and hits a butterfly suplex off the top rope but Matt interferes again and lays him out, allowing Nick to pick up the victory. It was fine, but too much interference. **1/4

TAKA Michinoku vs. Matt Jackson: TAKA wants to make friends and attempts to shake Matt’s hand, but eye rakes him to start things off. Back and forth. Matt works on TAKA’s arm. TAKA seems like he’s hurt, but he’s only faking as he jumps Matt and works on a crossface. Nick interferes allowing Taka to get distracted which causes Matt to take advantage. TAKA pushes Matt into Nick, however, and hits the Michinoku Driver for the victory. Solid enough. **1/4

Special Tag Team Match: Bullet Club (Bad Luck Fale, Tama Tonga, Yujiro Takahashi, Karl Anderson, Doc Gallows) vs. Captain New Japan, Hiroshi Tanahashi, Tetsuya Naito, Tomoaki Honma and Manabu Nakanishi: That’s a lot of names. Big brawl to start things off. Nakanishi and Gallows trade big man spots. Tama Tonga runs in and gets racked but Gallows interrupts and cuts Nakanishi off when he was signaling for a lariat. Fale and Naito are in and Fale overpowers him. Tama Tonga works on him as well, but he’s able to tag in Honma who gets his stuff in, including the headbutt. Honma is worked on forever by members of Bullet Club. Fale almost gets the border toss, but he escapes. Anderson tries for a brainbuster but Honma powers out and hits one of his own.

Tag to Tanahashi who runs wild on Anderson. One of the Bullet Club trips him, but Tanahashi is quickly back with a sling blade. Anderson hits a stun gun as Yujiro comes in. CNJ want a tag, and gets it as he starts work on Yujiro. Actually, all the babyfaces start working on him. CNJ hits a top rope move and nearly gets a pinfall, but it’s broken up. CNJ hits a uranage for a nearfall. A huge brawl breaks out between everyone. Anderson hits a stun gun on Tanahashi, then on CNJ. Yujiro hits the Tokyo Pimps on CNJ and that’s it. I don’t know why these guys keep tagging with CNJ, he’s always the one pinned. If this were real, you know? Good match though with lots of fun spots. ***1/4

Bullet Club work on Tanahashi after, laying him out and posing over him.

Intermission. Nothing of note except for the fun tag match.

BUSHI vs. KUSHIDA: Battle of the capital letters! KUSHIDA offers to shake the hand of BUSHI, but BUSHI slaps him. When did he become a heel? WEll, I guess he is for this match. Lots of cool back and forth spots to start things off. KUSHIDA wraps BUSHI’s arm on the apron and starts working on it. BUSHI cuts him off, sends him to the outside and hits a moonsault off the middle rope onto KUSHIDA on the outside. He does an octopus roll but only gets a two count. KUSHIDA rallies back and hits a kick to the temple for a nearfall. Moonsault, but BUSHI brings up the knees. KUSHIDA eats a botched codebreaker and BUSHI follows with another one off the top rope that looked way better for the pinfall. Pretty good match, both are good high flyers and they showcased that here with some cool spots. ***1/4

Kenny Omega vs. Desperado: Great exchange at the start. Kenny hits a big dive on Desperado to the outside. From there, they brawl around Korakuen Hall. Desperado attempts a piledriver off a ledge, but Omega instead back body drops him onto a young guy on the floor. Omega follows that with a moonsault off the ledge to the floor. They get back into the ring where Kenny covers for a nearfall. Omega has really great charisma that a lot of the junior guys don’t have, i’ve been noticing. Kenny continues to work over Desperado. He finally comes back with a huge dive off the ring and into the crowd. Omega goes for a superplex but Desperado keeps fighting back. Desperado with a sunset flip into a powerbomb but only get a nearfall.

Desperado goes for a vertebreaker but Omega counters only for Desperado to fight back and hit a rolling senton into Omega. Desperado misses a big dive off the top and Kenny fires back with a huge chop and goes for his finish but Desperado counters with a vertebreaker for…a two count! Kenny somehow kicked out! Desperado hits a spinning powerbomb however, and that gets it done. Very good match. ***3/4

Ricochet vs. Jushin Thunder Liger: Liger and Ricochet shake hands before starting out. Both Liger and Ricochet are over huge with the crowd. Ricochet ducks and dodges Liger with some spectacular high spots. On the outside, Liger goes for a dive but Ricochet grabs him and slams him on the apron. He goes to the ring and hops off with a spectacular looking dive to the outside. Ricochet works on a leg submission back in the ring, but Liger grabs the ropes. Ricochet continues working on the leg. Liger fights back with a boot and a tilt a whirl backbreaker. Surfboard by Liger. Ricochet powers out and somehow counters with a brainbuster. Standing shooting star press for a nearfall. Shooting star press off the top rope for a nearfall. Springboard 450 splash but no one’s there. Liger with a huge palm thrust for a nearfall. Liger bomb counters into a slap but Liger counters wit into a thesz press out of nowhere for a nearfall. Well, that was very anticlimactic. But this was a good showcase for Ricochet to show off his skills. Good, technical match as well. ***

Ryusuke Taguchi vs. Alex Shelley: Crisp back and forth to start. Shelly hops off the apron and Taguchi follows, but Shelley trips him on the apron, getting the advantage Taguchi eventually cuts him off with some offense. Shelly counters with a huge dive to the outside. They end up brawling on the apron. Taguchi hits a DDT to the apron. Huge swanton off the ring onto the floor by Taguchi. A German connects, but Shelly counters with a dragon suplex. Sitout powerbomb by Taguchi for a nearfall. Taguchi with a reverse facebuster but still nothing. After some more back and forth, Shelley fires back with a modified piledriver he calls the automatic midnight for the pinfall.  Another good match to cap off the show. ***1/2

Shelley says wait. He said one year ago he said thanks after beating Ricochet. Because of Bullet Club, he wasn’t able to win in the finals against Prince Devitt. But this year, he wants KUSHIDA in the finals against him. He says the winner is New Japan Pro Wrestling. HE thanks them again as the show ends.

A solid show with some good matches. Nothing blow away, but still a fine card for $15. The big tag match before intermission continued some feuds they have going for the Dominion show later this month. Kenny Omega/Desperado is a very, very good match that was the highlight of the card, along with Ricochet’s high spots. No one seems to be a clear favorite in the Super Juniors tournament thus far, and really we won’t know for sure who makes it to the semis and finals until the day of the finals, but if I were to guess I would say BUSHI and Shelley make it to the finals. Overall, though, this show was fine with some good matches.

Thanks as always to @SenorLARIATO for the gifs. You can order the replay of Best of the Super Juniors Night 4 below: 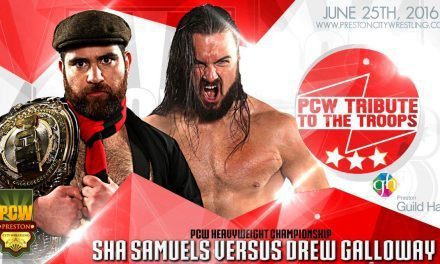 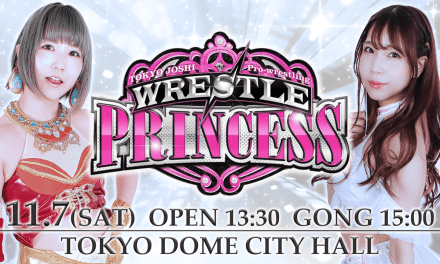