Coming off an acclaimed War of the Worlds, Ring of Honor is riding high and has even bigger shows on the horizon with their return to traditional pay per view in late June. With the renewed interest in their product ROH has the chance to capture back some of the fan base it lost during the early days of the Sinclair Broadcasting era. However, a looming long term problem of the company may rear its ugly head again at Best in the World.

I am not referring to the company’s past internet pay-per-view boondoggles. Instead, it is the company’s extremely long title chases, littered with lost matches, which threatens to sour the ROH fan base.

Long-time ROH stalwarts such as myself are well aware of quickly the fans can turn on an ROH World Champion. The best example of this is Tyler Black. In 2008, Tyler Black rode a wave of momentum thanks to tremendous matches against Bryan Danielson and Nigel McGuinness. Fans were clamoring to see him win the title and Final Battle 2008 seemed like the logical time for him to do it. Logic did not dictate the booking however. Black would spend 2009, the year many thought he would be champion, chasing McGuinness and never winning the belt. It looked like he would get his moment at Final Battle 2009 against Austin Aries. What seemed like sure lock turned into an agonizing one hour draw. By this point Black’s popularity was beginning to wane after so many failed attempts to win the belt. So when he finally did get his moment in February 2010, the fan’s response outside the initial pop was a universal “meh.” Black spent the majority of his reign trying to win back the fans before finally turning heel in the dying days of his ROH career.

Now in 2014, ROH may be making the same mistake twice with “Unbreakable” Michael Elgin.

In the same vein as Tyler Black, Elgin is a tremendously talented competitor that came out of nowhere. Like Black he came in as a secondary piece of a stable. Also, like Black he broke out in a critically acclaimed title match. After said matches both men’s popularity sky rocketed and fans wanted to see them take the title. Both Black and Elgin also share the same frustratingly long chase as well.

For the past year or so Michael Elgin has been calling himself the uncrowned world champion. He has a good point. In the finals of the world title tournament in September 2013 he had a visual pin fall on Adam Cole. Before that, Elgin was the number one contender but never received his shot due to then-champion Jay Briscoe being stripped of the belt. At Final Battle 2013 Elgin had another chance at the gold in match with Cole. Jay Briscoe was interested into the match, which decreased Elgin’s likelihood of winning the belt. Following interference from Matt Hardy, Elgin took the pin fall. Last Saturday in New York he also took the pin during the IWGP Heavyweight title match. On top of this Elgin already has two failed challenges from 2012 as well.

By this point the resemblance in the two tale is alarmingly similar and the same can be said about the fan response as well.

During Black’s chase the fans began to grumble. Many complained he could not carry another talent to a decent match. Other fans said that he used the same spots over and over in his matches. While another portion of the fan base just wanted him out of the title picture after so many failed attempts. I am starting to hear the same type of negative chatter about Elgin. Some fans deride him for using the same power spots in his bouts. Another common complaint is his perceived lack of charisma. The chatter is not nearly as loud as it was in 2009 for Black but it is still there. Luckily, ROH has a chance to avoid this June 22nd in Nashville when Elgin finally gets his one on one shot against Adam Cole.

For Michael Elgin the time is now for him to become ROH World Champion. Adam Cole is running out of challengers. On top of that Elgin has been strongly booked this year with only two losses and is a believable threat to Cole’s title. All of this indicates a logical title change in Nashville. However, history has proven ROH does not always follow logical booking and may want to prolong Elgin’s chase like they did with Black. If they do so they will rob a talented competitor of his chance to have a meaningful run with the belt, one that could be quite profitable with all the momentum ROH has going. Here is to hoping that history does not repeat itself in Music City. 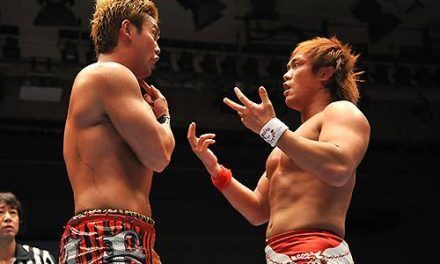