Raw starts with Bray singing his song. Lights are seen everywhere within the crowd. I would normally be annoyed with the song, but this was a pretty cool visual. He did his usual shtick, going on about superheroes. We go on our lives thinking nothing is wrong, but everything is wrong. Goes on about a story about a teacher. The teacher said he was evil once. She’s rotting in a retirement home, however, and he has the whole damn world in hands. He is the evil that is needed to balance everything in this world. He says tonight, in a completely revolutionary match, John Cena will take on Luke Harper for the 10,000th time. Cena’s music played. Harper and Rowan look to jump him in the aisle, but Cena comes from behind and gives Wyatt the AA then exits quickly.

Sheamus vs. Cesaro: REMATCHAPALOOZA~! I don’t know if I’m completely new to this fact, but 9 times out of 10 every time they come back from commercial, someone’s in a sleeper. I mean, I know why production wise, but it’s kinda predictable. It picks up at the end with Heyman distracting Sheamus, allowing Cesaro to get the victory. Good match. Sheamus extends his hand, but Cesaro rejects it and walks away.

Recap of Evolution/Shield stuff from last week. Reigns picked up a nasty looking eye injury while on the European tour and footage of that was shown as well.

There is a beat the clock challenge tonight. Winner (?) gets a title shot at Payback.

Ryback vs. Big E: In this important contest, neither got entrances. They had a basic match. Ryback was looking to end it, but Big E floated off his shoulders and managed to hit the Big Ending at 5:02. So that’s the time to beat! Lawler said this was bad news for Wade. Why? He beat him clean twice on two consecutive days. It shouldn’t be a problem to beat him again.

They aired a commercial for Legends House. I had no earthly idea what was happening. That show’s ending soon, right?

Fandango vs. R-Truth: Except not. Summer Rae made her return. She made out with Fandango then took down Layla and they brawled. That was that. People got to Fandango, at least.

Bo Dallas is debuting on Smackdown this Friday. Why? See the latest NXT and you’ll see why they don’t trust him with a live mic. As much as I like the character, that doesn’t mean he’s like great on promos or anything.

Daniel Bryan’s music played. People cheered, but it was Stephanie. She said a lot of stuff, mainly that Daniel Bryan is contemplating stripping Daniel Bryan of the WWE championship. She listed some people who she could give it to, but she says she won’t strip him of the title. Instead, he will be forced to come to Raw next week and surrender the title because that is best for business.

Heath Slater vs. Rusev: 3MB are the Union Jacks in the UK because, well, I don’t know. It’s not like the announcers established why they have a completely different name and are babyfaces here. Lana comes out and runs down the United States and the UK. This brought out Rusev, who quickly destroyed Heath Slater. So I guess we’re supposed to forget he kind of started a feud with Big E last week. Maybe? I don’t know. He quickly won with the accolade.

Shield were in the back. They cut promos on Evolution. Reigns says that if this eye injury is all they can do, then they have problems. Rollins says they nearly ended his career on Smackdown. Tonight, things will be different. Believe that.

Alberto del Rio vs. RVD: REMATCHAPLAZOOZA~!  This is the second beat the clock challenge match. I feel like I’ve seen this 10,000 times. Maybe not during this RVD run, but definitely the last one. Nothing of note, at all. RVD wins with a rollup at 4:15 so that is the new time to beat.

John Cena is interviewed by Renee. He says that there are a lot of people who are Wyatt followers, but with the Usos by his side, they all have a heart that can’t be beat. Or something. They beat their chests a lot.

Triple H says if they think thats all they have, then they’re dumber than they thought. Batista says he’ll take care of Rollins tonight and he’ll do it all by himself.

Rollins comes out for his match, but Triple H has declared himself the ring announcer, with Randy Orton as the timekeeper. They said earlier that only official personnel will be at ringside, see. Rollins grabs a microphone and says he wants to introduce the special guest commentators, Roman Reigns and Dean Ambrose. They make their way to the ring.

Batista vs. Seth Rollins: REMATCHAPALOOZA~! They have a pretty good match to be honest, but the real story is the presence of the four other people around the ring. Rollins is at the top, but Triple H pushes him off. This leads to the breaking point where it turns into yet another all out brawl. The match at Payback, by the way, is a no holds barred elimination match. Triple H punches Seth Rollins for yet another DQ. Ugh. This was fine I guess though, the real match between all these guys is at Payback. They try and give Batista the triple powerbomb but he manages to escape just in time thanks to Orton.

Alicia Fox vs Paige: REMATCHAPLOOZA~! Back and forth match. Paige gets what I think was the paige turner, but it was onl a nearfall. Alicia counters with a backbreaker then puts her in the middle rope and kicks her in the head to pin her. This was such a poorly executed way to pin Paige in her first loss. Alicia went crazy after the match, pouring soda all over herself in victory. I guess this is the title match for Payback.

Mark Henry vs. Dolph Ziggler: This is the last beat the clock challenge match. They had a somewhat decent match. Henry grabs Ziggler in midair and goes for a powerslam, but that was only a two. He looks confused as time is counting down. He goes for the world’s strongest slam, but Ziggler counters with the zig zag. He goes for the cover, but time runs out and no one wins. RVD wins the beat the clock challenge and he’ll face Bad News Barrett at Payback. Yay…?

RVD comes out to celebrate, but Barrett lays him out with the elbow to big cheers. He says he has some bad news. He says that RVD has to face him at Payback, and praises England as Rule Britannia plays.

Renee is in the ring. She calls out Adam Rose, who in fact is way way WAY over here than he has been in the last two weeks he’s been on TV. Basically says don’t be a lemon, be a rosebud. He wants Zeb to do the same thing, as he’s a sour lemon. This brings out Zeb. He says he has a bone to pick with Rose. He runs down England before saying he wants to settle it, one on one. This causes Swagger to jump Rose and leave him lying. He gets too distracted with he rest of the party people, however, and he ends up sending Swagger to the outside. More partying ensues as Swagger and Coulter sulk to the back.

John Cena vs. Luke Harper: REMATCHAPALOOZA~! They have their usual match, which means it was pretty good. The crowd chanted “John Cena sucks” to his music. They also sang Adam Rose’s song too.   Crowds are so weird in 2014. Both Cena and Harper did hurricanranas to each other. Think about that. Harper put Cena in a torture rack position into a neckbreaker, which looked cool, but still only a nearfall. Usos and the other Wyatts go at it but Wyatt leaves them both lying with his finish. Well, so much for that backup. Harper with a Michinoku driver but only a nearfall. John Cena with an AA, but Rowan immediately runs in and interferes for a DQ. THEY JUST DID THIS FINISH AN HOUR AGO. Ugh. Still, this was a pretty fun match.

Wyatt hits his finish on Cena after the match. Harper and Rowan take him to the stage. Rowan with a fallaway slam. Wyatt then hit his finish on Cena on top of the stage. Crowd chanted Yes to Cena’s peril. Wyatt sang the song as Harper counted to 10, alluding to their falls count anywhere match at Payback as the show goes off the air.

This show was better than the last two weeks in that it didn’t annoy me as much as others. But man, this show highlighted a big problem WWE has right now — the talent depth. The guys they have on Raw, Smackdown, Main Event, and a whole bunch of other shows right now all range from fine to great. There’s no problem with match quality as no one, aside from maybe Khali, is bad enough that they can’t have at least solid matches. The problem is the same people are fighting for weeks, trade wins, and no one ever moves up or down the card. WWE either needs to get some old guys back, use their lower midcarders like Justin Gabriel and Zack Ryder or something because the product comes off as incredibly stale when you do a bunch of rematches like we saw here tonight. With that being said, this was a fine show that promoted a show that doesn’t have much interest coming into or after this show. 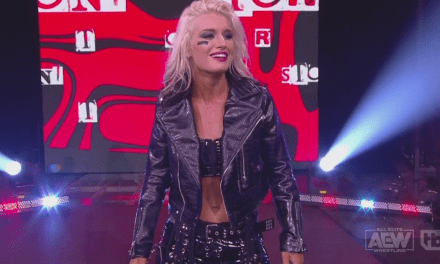