Raw looks mundane to the max on my Twitter feed. Then again I’ve said that for every Raw following the post-Wrestlemania edition. Extreme Rules was a fun show, and you can read my review of the card here, as well as additional thoughts here on VOW here, but this show seems like it’s going to do nothing for me.

Battle Royal for the United States Championship: All the usual geeks were in here. This is a battle royal as a result of the Authority making this a few hours before Raw started. They had a boring match. There was one spot where Mark Henry and Big Show had a staredown and people popped. I don’t know why, but they did. Eventually it’s whittled down to Sheamus and Dean Ambrose. Ambrose eliminated Swagger, then eats a brogue kick and gets eliminated. Sheamus is the United States champion. I don’t know why. I would have preferred to have seen Ambrose beat Lex Luger’s streak since he’s close to being there already, but it doesn’t matter in the long run I suppose.

Triple H says they were lucky to win last night. Despite the fact Batista lost clean. Their luck is changing, it seems, because tonight they’ll also be facing the Wyatts tonight.

Rene is with Sheamus. Tonight was the perfect time for Sheamus to get back to glory. He says no hard feeling, fella to Dean Ambrose.

Bryan and Brie are backstage when Stephanie walks in. She says congrats on his “victory” but all he really did was anger Demon Kane. Yes, that is what Stephanie called him. Also, I would be mad too if I got pinned clean. Which Daniel Bryan did, by the way. He’s capable of unspeakable violence. She says it’s best if they stay in their locker room until his match tonight. When Stephanie exits, the door has Kane’s mask behind it. OOH, SPOOKY.

Rob Van Dam vs Cesaro: Uh oh, it’s a post-special event edition of Raw. You know what this means- REMATCHPALOOZA! Paul Heyman came out and didn’t even try to be cute this week. They had a match, it was ok. Not good, not bad. Definition of okay. People chanted CM Punk. When are you people going to get it? Eventually RVD goes to the top and Cesaro grabs the ropes causing him to fall into the tree of woe position. He then starts beating him until the referee counts to five, disqualifying him. This is WWE’s new favorite finish to do as they’ve done it twice in the last month alone. And all 3 times it was FUCKING STUPID AND THEY NEVER NEED TO FUCKING DO IT AGAIN. God how infuriating. So now they’ll have 500 matches in a row now because WWE Booking in 2014.

he Wyatts are here. Bray starting doing his shtick. He says for years they called him a nobody. They made this day so sweet for me because last night Bray Wyatt became somebody. They show what happened last night in the cage match. You can’t fool the children, John. Their eyes see right through you. Cena thinks that he’s doing all this for himself, but he’s wrong. He does it for the children, for the homeless man, for the insecure teenage girls because he does it for every single one of you. You will not remember me as a monster, but as a god. He then sings his song. He didn’t say anything particularly important but at least it was kind of interesting.

Ryback vs. Cody Rhodes: REMATCHAPALOOZA! (ok, not at Extreme Rules, but I’m pretty sure we’ve seen this sometime in the last month). The announcers immediately started to talk about Mother’s day, in case you didn’t know this is an unimportant match. Cody mounts a comeback after being beaten on, goes to the top rope but Axel and Goldust go at it, causing Cody to get distracted and gets shellshocked for the pinfall. Nothing after the match.

Daniel Bryan and Brie were backstage when suddenly the lights went out and a Kane mask appeared in a light. They run away where they conveniently meet up with Stephanie. She says they look scared, don’t worry, she’ll have them bring up the rental, right here in the area. Yaaaaaaaaawn.

Los Matadores are in the ring with Torito. The ring is filled with stereotypical Mexican garb, sombreros and pinatas and everything. Torito passes out candy to the audience. Suddenly, 3MB arrive. They can’t have a party with 3MB, it seems. They wanted to make a truce. The Matadores responded in Spanish. Jinder says we’re in America, speak English. The fans responded by chanting USA. I don’t think that’s how it was supposed to go. Torito offers Hornswoggle candy, but Hornswoggle rejected it and they end up brawling. Matadores eliminate everyone, leaving Hornswoggle by himself. He gets stuffed into a sombrero and Torito uses his horn to eliminate Hornswoggle from the ring. I liked this for some reason, even if it means Torito and Hornswoggle are in a never ending feud now. Kofi Kingston vs. Rusev: She says he is proud to be Russian and admires Vladimir Putin. They show an image of him on the titantron. You are merely pawns in his game for world domination, she says. She talks about Edward Snowden. She says she proudly introduces someone who now resides in Russia, RUSEV. I guess someone lost a first name in the last 24 hours. This was a bit livelier than other Rusev bouts but again, he wins rather quickly with the accolade. Someone needs a program.

Bryan and Brie head to their car. They get in their car and there’s an inside camera there. Talk about suspension of disbelief. Bryan says he can’t wait to leave. Suddenly there is A NOISE and Brie screams, but it’s only Stephanie. She says she knows she said Bryan could go, but he needs to go have a match NOW or it’s considered a breach of his contract and he’ll no longer be WWE champion.

Daniel Bryan vs. Alberto del Rio: This crowd, who has been barely active tonight, is completely behind Bryan. It’s kind of amazing how Bryan’s being saddled with a stupid Kane feud, which normally hurts careers (see: Zack Ryder) and he’s still the most over guy on the show. Granted, Bryan has tons more upside than Ryder could ever imagine, but still. They had a long match that was solid enough, better than the RVD match earlier. del Rio motions for the armbar, but Bryan does a tilt-a-whirl and locks in the Yes lock, allowing Bryan to score the victory.

Suddenly Kane’s music hits. They run away from the ring and head backstage to the car. Their car isn’t starting. A wire is unplugged. Brie pleads with Bryan to hurry, but suddenly KANE IS IN THE BACKSEAT. Brie yells as they start brawling. Bryan enters the car but Kane climbs on the car and grabs his hair through the car roof window. Bryan finally gets the car to start and flees, leaving Kane to fall to the floor. Bryan then stops the car and looks at Kane like an idiot. This is why people die in these horror movies, dolt, because they just stand around and wait for the killer to come and kill them. Kane is seen lying in a preposterous position considering he just fell off a car, lying flat on the floor face up and sideways. He rises up, which is the signal for Bryan to make his exit as Kane get up and starts laughing.

This was completely stupid and unbelievable, but on top of it all…look. 1997 was 16 years ago. Kane has been doing this off and on for years. And every time they go to the “MONSTER KANE” well they come up with the same shit over and over and over and over and over. No one cares about this gimmick. No one believes any of this shit for ten seconds nor do they find it entertaining or interesting. I don’t even know what it is supposed to accomplish at this point except maybe try and derail Daniel Bryan’s momentum. But even that’s not working considering the most heated match of this show up to this point was his. A failure on multiple levels.

Intercontinental Championship – Big E vs. Wade Barrett: REMATCHAPALOOZA! Talk about derailing momentum. Maybe they should put the Intercontinental title on Daniel Bryan. He’s got some bad news, and pretty much just calls everyone ugly. Nice back and forth match, about the same level as the match they had at Extreme Rules. Barrett wins with the Bull Hammer after eye raking Big E who was going for the big ending.

A mother’s day message from Mr. T. They just show his Hall of Fame speech. Okay, this was the best thing on the show.

Swagger and Coulter arrive. Coulter says today is May the 5th, not Cinco de Mayo. People here only celebrate it because they want to get drunk and vomit. People liked this. He has a deportation list. He says Cesaro and Heyman should be deported because Cesaro betrayed him. Emma and Santino should be deported, especially Emma so she can hop her way back to Australia. There’s also Sheamus and Paige because neither have seen the sun since 1997. Suddenly, an entourage arrives. Adam Rose makes his debut, dancing and crowd surfing to the ring. His crew looked smaller here than it did on NXT. He pretty much just grabs Coulter by the beard and says don’t be a lemon, be a rosebud. His crew then party in the ring. The announcers used this to plug the latest gimmick they’re doing with a network, refer a friend. This could have been better but it was okay, I guess.

The Shield vs. The Wyatt Family: They go on to have a pretty great match, as one would expect here. Lots of fun stuff throughout. The highlight was Rollins and Harper having a great back and forth exchange. Eventually, it’s Wyatt and Reigns. Reigns hits Wyatt with the superman punch, but suddenly Evolution’s music hits. They all make their way to the ring. The Shield ward them off, but suddenly Wyatt emerges and hits Reigns with the Sister Abigail and pins him. Did it really need to be Reigns who gets pinned?

Evolution beats down the Shield, giving them multiple finishers again. Triple H goes for a pedigree, but Reigns fights back with a back body drop, only for Orton to hit him with an RKO. Triple H picks him up and pedigrees him, then they do the Shield powerbomb to Reigns as they’re all left lying. Evolution poses as we go off the air.

Not much. I’ve said my piece on the Kane deal. The main event was really good. Nothing else mattered on this show, so…yeah. I wouldn’t call this a good show overall. 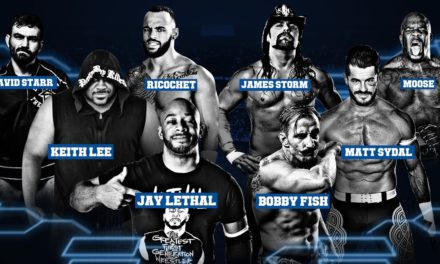 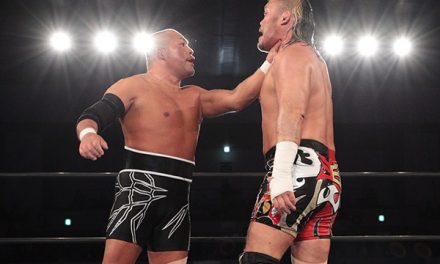