It was pretty surreal to gather in my friend’s living room, sit down, crack open a beer and see the featured participant of WrestleMania was Bryan freakin’ Danielson. Sure he is now Daniel Bryan but who cares, this is the same Bryan Danielson I saw a years ago wrestling a young Roderick Strong for close to an hour to retain his Ring of Honor Champion. The same Danielson I saw battling Takeshi Morishima with 1,000 other diehards at the Frontier Fieldhouse in Chicago Ridge, Illinois. I watched him travel from town to town alongside Colt Cabana in “Wrestling Road Diaries”, saw him mysteriously fail a physical and break down emotionally. He was still the little engine who could a few years ago and now THIS.

For some, the ascension of Daniel Bryan took far too long. This guy was obviously a huge talent on the independent scene for close to a decade, what took WWE so long? Why just not in 2014 has he become “the man?”

To the first point, I agree, he should’ve been signed years ago. Bryan signed a WWE developmental deal in the early 2000s but was still a baby at the time. After some more polish on both the independent and global scene, he was ready to go. I’d argue he was already the best wrestler in the world by 2006-2007. Yet, it took until August 2009 for WWE to recognize and sign the 28-year-old.

Upon arriving in WWE, he was immediately sent to Florida Championship Wrestling and moved onto a pretty ridiculous stint as an NXT trainee who was mentored by The Miz. Yes, The Miz mentoring Bryan Danielson, it happened. The whole run was marred by then-heel announcer Michael Cole blabbering on about how he was a virgin and a Vegan, it was truly awful television and a total waste of time and energy on an incredible talent in Bryan.

As you probably know, Bryan was released shortly thereafter for his participation in an angle on WWE television that saw him use a tie to choke out ring announcer Justin Roberts. This was a legit firing, which allowed Bryan to go back into the indies for a bit, before eventually returning to WWE at SummerSlam 2010. This is where our story gets interesting. After a year or so of toiling in obscurity, Bryan was launched immediately to the United States Championship. In July 2011, he won the Money in the Bank briefcase and at December’s Tables, Ladders and Chairs PPV, Bryan won his first World Championship.

He famously lost the title in 18 seconds at WrestleMania XXVIII, but the day after would be the most important day in his career. It was the day the “Yes!” chants started and to date, they haven’t stopped. You know the recent history of Bryan from toiling away in Team Hell No for a few months to being hand chosen as the SummerSlam opponent of John Cena, winning the title, being screwed by Triple H multiple months, joining The Wyatt Family, etc., etc.

To some, it seemed like an eternity before they finally gave “the ball” to Bryan but that’s really not true. Sure, he wasn’t the focal point of the company but where other wrestlers (we’ll get to them later) toil away in obscurity or mid-card land for years, Bryan seemed to skip all of that. Not only was he immediately put in larger title pictures, the company recognized his immense talent right away, putting him in longer than average matches and newsflash — Daniel Bryan performed well in most of those matches.

Let’s examine Daniel Bryan’s match lengths. The dataset we’re using is all WWE PPVs from September 2010 to this year’s WrestleMania. The data only includes singles/tags or multi-man matches but eliminates Elimination Chambers, Royal Rumbles or traditional Survivor Series matches. I’ve also eliminated all matches under five minutes (there we only two). What this gives us is a decent look at the career trajectory of Bryan.

What we see is an early blip then a neutralizing point from January 2011 to January 2012, a period where he bounced in and out of the United States title picture. By mid-2012, we see Bryan’s match length exploding to nearly 24 minutes and then hovering near the 30-minute mark thanks to a series of matches against CM Punk for the WWE Championship in mid-2012. We see a fairly large drop off in the beginning of 2013, which was the height of Team Hell No including a painful 6:17 WrestleMania match against Big E Langston and Dolph Ziggler. Thankfully, in mid-2013 we start seeing another rise as Bryan is inserted into the title picture and becomes, yet again, a main event player.

Now initially looking at this chart, you see what we could possibly consider a mid-card rise. We see that beginning period where he hovers around a 10-minute average but using data provided by Chris Harrington and Matthew Timmons of KayfaberMetrics we can see Bryan was well above average during this time period:

Bryan consistently hovers above average outside of a small period at the end of 2011, early 2012 and his Team Hell No peak. To add some more perspective, I’m going to add an additional data set, average match length for another indie darling who seemingly had a quick rise to stardom in CM Punk. Punk was immediately thrust into the ECW Title picture and despite some bumps in the road was always in the picture. Only during his Straight Edge Society-era did he seem like a complete afterthought. Here is a look at his average match length leading into his “made-man” moment at Money in the Bank 2011.

What we see with Punk is that he immediately comes in with a long match but quickly falls well below the 10-minute threshold and stays there really until late 2008 where he pops up again, reaching a mid-level peak in early-to-mid 2009. He takes a huge leap in late 2009-early 2010 during his awesome feud with Jeff Hardy. We see a few more falls and rises before he eventually makes his way into true main event status at Money in the Bank 2011. Looking at the average length at the time though, we see Punk far below the average than Bryan ever was.

In all PPV matches using the same dataset as Bryan (no Rumbles, Chambers, etc.), Punk’s average leading into Money in the Bank 2011 was 11:29. Bryan’s average leading into his “made-man” moment of SummerSlam 2013 was 14:06. It seems like a small jump but with a standard deviation around 6:48, it’s fairly significant.

Here’s a quick snapshot of match lengths leading up to both men’s “made-man” moments. You’ll see Bryan absolutely destroying Punk’s length, most significantly Punk’s peak is roughly as high as Bryan’s third highest. Of course, Bryan had the luxury of wrestling someone as talented as Punk to get those high averages, whereas Punk was ahead of this current in-ring boom and toiled with the dredges of ECW and Smackdown during much of his earlier run. Still, it’s very interesting to see how much WWE trusted Bryan in the ring from the get-go. Not that they shouldn’t have, but far too often we pull our hairs out at WWE misusing independent talents. You can’t say the same with Bryan, he was given the in-ring ball pretty much from jump. Let’s take a slight diversion and see how Bryan performed during this rapid rise.

First we’ll look at Bryan pre-SummerSlam and see what the correlation between match length and star rating looks like:

“Essentially, positive star ratings appear to have a linear relationship with time — on average, the longer the match, the average star rating is higher.” 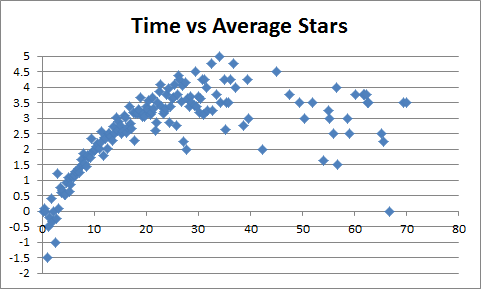 Like most wrestlers, the longer Bryan’s matches go, the better the star rating. There are a few outliers in this dataset including a **1/2 showing at the 2012 Hell in a Cell (Team Hell No vs. Rhodes Scholars) but for the most part, this looks pretty linear.

Again, we see a fairly strong relationship despite the relatively small sample size. This dataset has a few notable outliers, more than the larger set we looked at early thanks almost exclusively to a 25 minute **1/2 contest with Randy Orton at Battleground 2013. Hell in a Cell’s 22:17, ***1/2 stands out as well but not nearly as much as the Battleground rating.

Now everything together just to give you an idea of Daniel Bryan’s insane consistency as a WWE performer:

The Hell in a Cell tag match doesn’t look quite as bad when thrown into the overall graph but the Battleground 2013 length/star rating bubble still stands out as our most extreme outlier. Other than that, Bryan’s about as squeeky clean as you could hope. The most amazing thing is despite numerous opponents, tag matches, United States, World or WWE Championship, you’re guaranteed to get at least ** out of Bryan. The lowest ranked PPV match of his career was a SummerSlam 2012 battle with Kane (**), otherwise his average PPV star rating is a little over ***1/3.

Did you really think Chris “mookieghana” Harrington was going to sit by idly without putting this study to shame? Chris went a bit farther with the study of match lengths and star ratings, analyzing almost every WWE competitor ever. Obviously, we’re going to stick with Daniel Bryan for this piece and look at what Harrington found. First off, he used a different equation than I did instead choosing to use “logarithmic time instead of linear time because the r-squared was much higher among people who had many (10+) matches.”

We can come to a few conclusions from this data. First off, Daniel Bryan rose to the top of WWE quickly. It may not seem like it and along the way many fans had gripes of Bryan being under-utilized but Bryan had only 17 (non-Rumble, Chamber, Survivor Series, over five-minute) PPV matches before SummerSlam 2013. Moreover, a number of those matches involved major titles including the still-somewhat prestigous United States Title and Smackdown’s flagship World Heavyweight Title. To put that 17 number into perspective, CM Punk had 30 before Money in the Bank 2011. He was also involved in title pictures but it still took 30 PPV matches before he really became “the man” and one of the guys the company trusted on a long-term basis.

Bryan’s talents were recognized almost immediately, you could argue it was the talent around him but I don’t think that’s entirely fair. No matter who he was facing, whether or not he was in a tag team or out on his own against the Ted DiBiase Jr’s of the world, Bryan was given more than average match time to perform. As we saw with our comparison, CM Punk, that’s not always a luxury great workers have right away. Bryan never went below average at any point and most likely never will, there’s a lot to be said for that.

The rise of Daniel Bryan may not have been ideal for all of us, we may have scoffed at him being aligned with AJ Lee, becoming a comical goat, hugging Kane, meeting with Dr. Shelby, joining the Wyatt Family and being screwed multiple times by Triple H and The Authority but WWE had tremendous confidence in Bryan from the start and finally, in 2014, it’s passing off for them, for us and for Bryan.