At first glance, this is an extremely weak card but you have to remember this is a $15 iPPV. What that means is you’re essentially getting a spot show/house show on iPPV. Before you get your pitchforks ready, understand it’s being filmed for TV so putting it on iPPV is negligible. With that said, this doesn’t look like one to go out of your way to order though there is the potential for a few solid matches.

Conspicuous by his absence from all April and May lineups is Prince Devitt. We received word that his Invasion Attack stipulation with Taguchi (If Devitt loses, he leaves NJPW) was merely a “suggestion” but his absence from any of the cards adds more fuel to the fire of his impending WWE contract.

Wrestling Dontaku is a full-priced $25 iPPV taking place from the Fukuoka International Center. The show is highlighted by the much-anticipated bout between IWGP heavyweight champion Okada and brand-new Bullet Club leader AJ Styles. The former TNA product emerged from the crowd at Invasion Attack, cut a nasty promo on Okada saying the last time he saw him he was still a young boy and give him the Styles Clash setting up this huge bout.

In a match I’m personally dreading but some might find enjoyment in, Nakamura teams with Kazushi Sakuraba to take on the nuggets of NJPW — Daniel and Rolles Gracie. The match is a Wrestling vs. Jiu-gitsu MMA Fight and given all four competitors history in MMA and the fact that three out of the four are pretty terrible wrestlers, yeah, we’re getting a shoot-style fight.

I’m very much on the fence about this iPPV. Last year’s Wrestling Dontaku ended a streak of amazing NJPW iPPVs with a combination of mediocre matches and a tepid crowd:

In contrast to the last New Japan iPPV, ‘Invasion Attack’, which was held helped by a rabid American style crowd at Sumo Hall, this show suffered from not only a slate of underwhelming matches, but also a tepid (albeit sellout) crowd of 6800 fans. Fukuoka crowds have never been known to be the hottest on the New Japan circuit, but the matches themselves didn’t help matters.

Okada vs. Styles could and should be an incredible match pending Bullet Club’s involvement. If this devolves into a Prince Devitt Bullet Club-style inference-fest match there will be a number of disappointed people. Let these two work and build off the story of Styles remembering Okada as a “young boy” in TNA and we have a match worth the $25 alone.

Outside of Styles vs. Okada, there’s not a whole lot to love. The Young Bucks vs. Forever Hooligans in the Jr. Heavyweight Tag match can be good but it will be a paint-by-numbers Jr. Heavyweight Tag match and the Wrestling, MMA fight thing is not something I’m even remotely looking forward to, some will enjoy it and I hope it’s good for them, but it’s not my cup of tea.

Is it still worth the money and worth a purchase? I still say yes as I believe Styles vs. Okada is worth $25 alone. Add in the very high probability of seeing a new champion and New Japan’s track record of success on major iPPVs and it’s a no-brainer, regardless of the disappointing card.

For a list of full April and May lineups visit puroresufan.com. 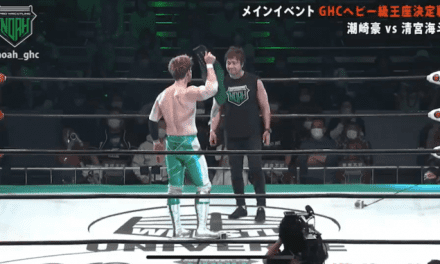