0. Super Shisa, Shachihoko BOY vs. Kenichiro Arai, K-Ness – K-Ness replaced Chihiro Tominaga, who was moved to match #3. Some nifty mat wrestling early from Arai & BOY. Arai is a grimy veteran undercard heel, sort of like Dragon Gate’s answer to Gedo. I always enjoy his stuff. Really good back & forth bout, with tons of action, as they did a little more than what you usually see in a Dragon Gate preshow/opener type match. Arai was pretty great here, and the glue that held the match together. BOY cradled Arai at the end of a long reversal sequence to pick up the win. This got a nice pop as it was seen as a bit of an upset. Fun match. **3/4

1. Gamma, Ryotsu Shimizu vs, CIMA, Kotoka – If you don’t follow Dragon Gate closely, you may be surprised to see CIMA in the opener. He’s at the bottom of the card these days, ever since dropping the Dream Gate title to Shingo last year, due to both injuries, and the kayfabe and non kayfabe story of Dragon Gate transitioning to youth. Kotoko is his protege of sorts, as they frequently team, and Kotoka also did a “CIBA” tribute gimmick for a few months. He’s loaded with potential, as is Ryotsu Shimizu, who by the standards of this roster is a big powerhouse type. A former American style football player, Shimizu nearly won the WON Rookie of the Year award last year, and shows an advanced level of charisma for a guy with his experience level. Kotoka sold forever early, which is his strong suit, getting tossed around by his larger opponents. Gamma & CIMA stayed out of the finish, which was Shimizu using his wheelbarrow giant swing variation before finishing off Kotoka with his high angle crab hold. CIMA gave Kotoka some tough love for losing. Shimizu looks better & better every time I see him. **

2. Falls Count Anywhere Match: Don Fujii vs. Yosuke♡Santa Maria – Santa Maria is hardy the first exotico gimmick to come down the pike, but it may just be the best. I wasn’t sure it was the best idea when they rolled it out, but Santa Maria has embraced it, owned it, and has been absolutely fantastic with it. This was short. Maria surprised attacked Fujii during his entrance, which popped the crowd. At one point, he kissed Shimizu, who was doing young boy duties. Shimizu sold it like he was gagging to death. Fujii avoided several kisses of his own and locked in a crab hold to pick up the submission win. *1/2

3. 2 Count & 3 Escape Rules: Masaaki Mochizuki vs. Chihiro Tominaga – This was originally supposed to be Mochi vs U-T. This was as good of a five minute match as you will get. Simple story, with the no nonsense veteran ass kicker taking on the feisty, never say die youngster. Admittedly this type of match is right up my ally, but I really loved this. Kotoka has a better look than Tominaga, and more natural charisma, but Tominaga is every bit as good in a similar role. Mochi kept kicking out before the one count, which was a nice “this kid has nothing for me” touch.  Tominaga used up his rope breaks, the last on a heel hook, before succumbing to a high kick to the skull for the two count. ***

4. Genki Horiguchi H.A.Gee.Mee!!, Jimmy Susumu vs. Mondai Ryu, Kzy – Did you know Genki won the King of Gate tournament two years ago? If not, no worries, he still proudly displays his “King of Gate 2012” victory on the wifebeater he wrears every match. Many Dragon Gate enthusiasts skip Mondai Ryu matches, and aside from a hot closing stretch, this match was a good example why. Not much action. Cyber Kong accidentally delivered a big lariat to Kzy which allowed the Jimmyz to pick up the win, which was really just a set up for the post match friction between the Mad Blankey members. It appears BxB Hulk & Naruki Doi are headed towards a match, and that match will be in the first round of the 2014 King of Gate. Mad Blankey has survived a few unit shuffles, and Hulk himself could really use a fresh coat of paint. **


5. Special Singles Match: YAMATO vs. Uhaa Nation – This was the most complete Uhaa Nation performance of his career, and to me, a star making one. While I though his Dream Gate match with Ricochet was good, it was sort of a collection of spots, the type of match people who dislike Dragon Gate are critical of. This match was the type of match that could fit in any promotion, with a traditional pace, and traditional structure (Dragon Gate, contrary to reputation, usually has one or two matches like this per show). Uhaa has always looked the part, and has always done things with his body that a man with his size & frame has no business doing, but in this match he truly came across as a star more than ever. YAMATO is always great and is probably one of the more under appreciated workers around. This was all about YAMATO using veteran savvy & heel moxie to try to slay the beast, and the finish came when Mad Blankey used the dreaded yellow box to knock Uhaa out cold. Sounds like a disappointing screwjob, but it fit the story and within context I had no issue with it. Uhaa is poised for a big, big 2014. ****

6. 4 Unit Battle 4 way 6 Man Tag Team Match: Masato Yoshino, Akira Tozawa, Shingo Takagi vs. Naruki Doi, BxB Hulk, Cyber Kong vs. Jimmy Kanda, Jimmy Kagetora, Mr. Quu Quu Tanizaki Naoki Toyonaka Dolphin vs. T-Hawk, Eita, Flamita – After a departure from traditional Dragon Gate style in the semi, we were back to business here. This was one of those super long Dragon Gate matches featuring half the roster, with a million crazy spots, wacky dive sequences, and callback spots (Doi & Yoshino teased doing an old spot of theirs at one point, for example). The first elimination didn’t take place until after the 30 minute mark, when T-Hawk pinned Tozawa to eliminate Monster Express. Kagetora cradled Eita to knock out The Millennials. Doi had Kanda set up for the Muscular Bomb, but Hulk kicked his own partner in the head, delivered his First Flash kick to Kanda, and stole the pin to win the match for Mad Blankey. This is one of those matches that likely comes off better live than on iPPV. Post match, Tanizaki laced into Kanda and ripped him for losing the match for the team. They’ve had friction for months. Then the Mad Blankey infighting continued. The story here is you have units not getting along going into the 5/5 Dead of Alive Cage Match, plus, in addition to Doi vs Hulk at King of Gate, Tanizaki will face Kanda as well. The match ended up setting up these angles very well. ***

Overall a very fun show that sets up the big cage match on 5/5 & the King of Gate tour very nicely. The Dragon Gate youth movement was on display with Yosuke Santa Maria, Kotoka, Ryotsu Shimizu, Chihiro Tominaga, The Millennials, and most notably Uhaa Nation looking very good. Dragon Gate has a lot of interesting stuff going on these days.

Special thanks to @SenorLARIATO for the gifs! 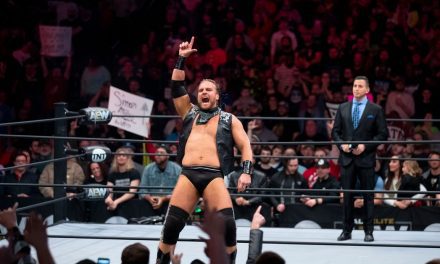