Mercury Rising is the traditional send off of WrestleMania weekend for the WWNLive brands, specifically Dragon Gate USA. In previous years, it’s been positioned as one of the top shows in the calendar year of Dragon Gate USA and a stepping stone to future shows. Last year, then-Open the Freedom Gate champion Johnny Gargano turned heel at the previous night’s Open the Ultimate Gate and solidified his heel status in the traditional Mercury Rising/Dragon Gate Six Man Tag main event.

We at Voices of Wrestling praised the booking of Mercury Rising as Gargano and DGUSA set the stage for numerous title defenses in the coming year. Last night we saw the conclusion of the year-long build as Ricochet won the Open the Freedom Gate championship ending the 28-month-long reign of Gargano.

Tonight, we have a new take on the traditional Dragon Gate Six Man, this time we have a Six Man Tag Team Tournament! Winners of first-round match-ups meet in a “three-way six man team mega elimination match” MEGA! The stipulation is each member of the winning team can book themselves in any future match they want, not necessarily title.

Note: We’re doing things a little different with this review, instead of going move-by-move we’re going to give our quick thoughts on the match, what we liked, what we didn’t like and top it off with a star rating using the traditional Dave Meltzer/Wrestling Observer scale.

Rich Kraetsch: Coming into the weekend this was not only my favorite match of Mercury Rising, but perhaps my most anticipated match of the weekend. The beginning was great as AR Fox, Rich Swann and Ricochet did all they could to avoid Masato Tanaka including surprise tags, hiding in the corner, running out of the ring, everything they possibly could. Once the action started, everyone seemed on the top of their game including some crazy spots from AR Fox and a sick reverse hurricanarana from Swann. Then, the next 15 minutes happened. I’m not usually against long matches but this one seemed to drag when really it had no right to. It wasn’t bad by any means, just…duller than it should’ve been. It picked up late when the men started exchanging finishers, Hero hit a few rolling elbows but eventually Rich Swann got the pinfall with a rolling cradle. Wish I could’ve liked it more but it dragged on far too much in the middle. **1/2

Joe Lanza: This match went way too long and lost me at points. Nothing wrong with the work, it was just dull. It needed a big finish, and got one. Lots of hot action down the stretch, and the vicious Hero boot to Swann’s face adds a quarter star. Didn’t love it, but I can’t go less than 3-stars for a finish where they worked that hard. ***

Rich: I don’t even know what this was. Chuck Taylor was depressed because Drew Gulak turned on him last night so he was working at half-speed…literally. Maxwell Chicago is apparently doing an awful wrestler, simpleton, Snapchat-fan gimmick, who knows. The Premiere Athlete Brand ran in to save this train wreck. Not really a match. N/R

Rich: Trent Baretta, Anthony Nese & Caleb Konley vs. The Gentleman’s Club: I don’t even know what to call this. First off, the match wasn’t very good. Not poorly worked just nothing to it. Taylor initially came out alone to face the PAB, Biff Busick eventually came to tag with him making it 3-on-2. Unfortunately, he didn’t help. Then VOW favorite Larry Dallas came out with Teddy Hart, two women and Teddy’s cat. Teddy attacked everybody and while nobody was looking Anthony Nese scored the pinfall victory. This was not good, at all. The match wasn’t good, the overbooking was confusing and annoying. This may be the worst match of the year when it’s all said and done. -**

Joe: This entire segment (I can’t call it a match) was one of the worst things I’ve ever seen in a wrestling ring. Starts off with Chuck Taylor vs Maxwell Chicago in a singles “match”, with Maxwell doing his “comedy”. He must be a laugh riot in person, because crowds eat him up, but he’s pretty much the dirt worst on iPPV with shitty sound where you can’t hear what he’s saying. Premier Athlete Brand came out and attacked Chicago, leading to PAB against Taylor three on one. Biff Busick comes out to team with Taylor, and this is briefly a decent match…until Teddy Hart comes out, with THE CAT, and things just completely break down. Hart joins Taylor & Busick, blows a bunch of spots, then turns on his partners leading to the PAB win. Just a mess all around. Crowd chanted “This is stupid”. Leading contender for Worst Match of the Year. I would be shocked if something can top it. -*****

Rich: The Bravado Brothers & Moose vs. Fire Ant, Green Ant & Lince Dorado: Another inoffensive but largely nothing match. The Bravados, as I mentioned in yesterday’s review, have improved tremendously while their tag partner, former NFL linemen Moose still has a lot of ways to go. He may look like Uhaa Nation but as Joe said on Twitter, he’s the dollar store version. *3/4

Joe:  Just a match, but felt like Tanahashi/Okada after that abomination I just witnessed. Moose is a big dude but comes of like a Dollar Store Uhaa Nation. He isn’t very light of foot. Green Ant cut a post match promo that was completely muffled thanks to his mask. I have no idea what he said, but I think he challenged the Bravado’s for the United Gate titles. **

Rich: Like much of this show, this wasn’t bad, it was just boring. Both women worked well but it never kicked into that next gear. Ivelisse works an engaging style and did a great job with the ground game and submissions.  It was worked at a pace that works for the middle of the match but not for this long and not without a kick-start somewhere in there. Martinez looked legitimately hurt after the match needing help to the back. *1/2

Joe: Dull as dirt. I won’t judge Shine based on this match alone, but I’m not exactly running to wwnlive to buy their shows after watching this. *

Rich:  Gargano did a fantastic job playing mega-heel in this match, working over Low Ki for a majority but the out of nowhere finish kind of hurt this overall. Gargano essentially has 95% of the offense, Ki Crusher out of nowhere and it’s over. Would’ve much rather liked to see Low Ki with some more momentum and show us something after taking a ton of abuse last night with little offense as well. I didn’t hate this but it wasn’t anything special. **1/2

Joe: Shocking finish. Decent match but it never really got going. Gargano has added complete insanity to his delusional act, as he offered Low Ki a title shot for the title he lost the night before. I expected this to be better. **1/2


Rich: Where to start here… let us go with the good. The match was real solid when all three teams were in there, lots of fun interplay, moves to the outside and generally an exciting, Dragon Gate-style match. Once it got down to the two teams (PAB and Fox, Ricochet, Barreta), the pace slowed a bit until the finishing sequence that saw Ricochet hit his Benadryller followed by a standing 450 from Rich Swann and a 450 off the top from AR Fox. Naturally, this only led to a two-count. Ricochet looked great throughout the match and had the crowd eating out of the palm of his hand. He’s going to have a great run as champion.

Now the bad — after seemingly losing all momentum, Barreta stormed into the ring hit a Saiku Knee to Fox and pinned him. There are flat finishes, then there’s this. No back and forth, no real build to the ending just random knee out of nowhere and done. This finish is suitable for undercard matches but not the premiere match (Dragon Gate Six-Man) at the premiere show of the year (WrestleMania weekend).  Everyone worked their ass off and it was a total spotfest but ultimately it didn’t go anywhere. ***1/4

Joe: They went all out with a full on spot fest sprint to try to save this thing. It was fun, but nothing special. Looks like PAB is getting the monster push this year. **3/4

Rich: Last year at this time, they positioned Gargano for three huge title defenses. This year, we got nothing but the Premire Athlete Brand dominating and Teddy Hart clearing the ring multiple times. There were some positives, Gargano’s character has new depth, Low Ki seems motivated and the more they can book Chris Hero the better.

The missing Dragon Gate talent showed this weekend as both weekend offerings lacked the depth we’re accustomed to with DGUSA. Definitely recommend you purchase and watch the last three matches of Open the Ultimate Gate but I’ll also recommend you stay as far away from this iPPV as you can. Even the redeeming stuff was only okay.

Joe: This was the worst Dragon Gate USA show I’ve ever seen, and possibly the worst of all time (I’ve seen at least 90% of them). I’ll close with a few positives. Open the Ultimate Gate was a great show. Johnny Gargano adding new layers of crazy to his act is fun. Caleb Konley is a strong contender for Most Improved 2014, and so is Trent Baretta for that matter. Low Ki had his working shoes on both nights. Chris Hero strengthened his very early case for Wrestler of the Year with the Masato Tanaka match at OtUG. As for this show, I can not recommend an order. 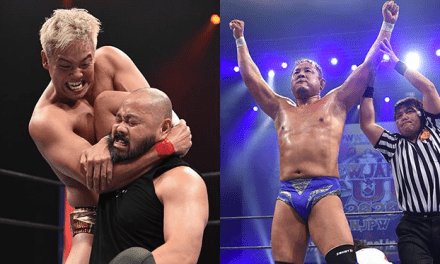 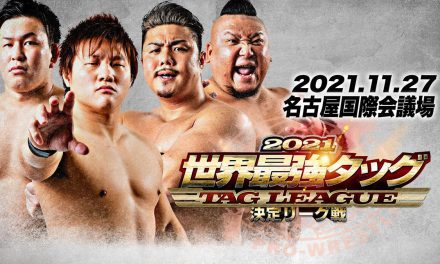