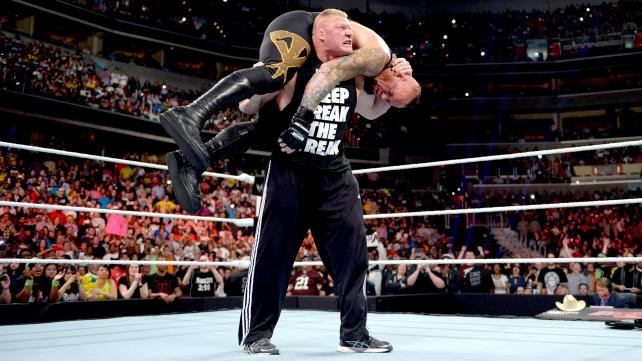 Raw starts off with the Author-wait, what? It’s the Undertaker! He slowly makes his way to the ring. Undertaker talks about the streak, how 21 men have attempted to break it but 21 men have fallen to him. I don’t think that’s the actual logistics, but ok. Talks about Brock. He wants to know what will happen once the water gets deep- will he swim to shore or fight it out? He says that it’s inevitable that the streak will be broken, but he believes in three things that can’t be beat- death, taxes and the streak.

Brock Lesnar and Paul Heyman arrive. He did not introduce himself this week. Maybe he accepts we all know his name. I know he does it to get heel heat, but whatever. Heyman says that this is not a match Brock Lesnar has to win. This is a match the Undertaker cannot lose. He says that Brock Lesnar will break the streak at Wrestlemania, and that isn’t a prediction, it’s a spoiler.

Lesnar and Heyman start to leave, but Lesnar turns to Undertaker and starts to move forward. He stalls for a long time until finally blindsides him after Heyman brings a steel chair into the ring, laying him out with the F5 before finally leaving. Decent enough job building to the match, I guess. Sure as hell beats last year’s match against Punk, that’s for sure.

Big E vs. Alberto del Rio. After weeks of getting destroyed by Batista, Alberto del Rio is in the midcard hell IC title picture. Sounds about right. Big E was in control for most of the match. He looked pretty good here. Hits a belly to belly and goes for a big splash, but gets kneed. Alberto tries to counter but gets cut off. He hits the big splash for a nearfall, then pulls down the straps and prepares for the big ending, but del Rio hits a backstabber on the arm and goes for an armbar, but Big E tries to power out…only for del Rio to sink it in more.

Big E breaks free and hits a one armed powerbomb, but del Rio puts a foot on the rope. del Rio takes out Big E with a foot stomp while he was on the middle rope and follows with the superkick for the pinfall. Really good match. ***1/2

Bray Wyatt talked. He will take everything they love and burn it to the ground. In time, they will forget John Cena, and he will be left with nothing. They will you the same way they do- as a monster.

They aired the big angle last night from Total Divas with Summer Rae slapping Natalya. That whole show last night was kind of implausible, especially the Nattie/Summer deal. Total Divas overall you know is the usual scripted reality fare, but oh dear is it far better than Rich Kids of Beverly Hills. Rich people are terrible.

Natalya vs. Summer Rae: Natalya immediately tackled her to the ground. Vickie Guerrero, on commentary, said that this Sunday’s divas match will be a one fall match. Oh goody, that’s going to be a hot mess of a match Then again, that best describes the Total Divas show in general.. Short match, but it was alright while it lasted. Nattie had her in the sharpshooter position, but Summer bailed to the apron. Natalya went to grab her, but Summer hit her with a kick and covered her for the pinfall.

The Authority make their way to the ring. They talk about how Daniel Bryan is a fad and mention how last year’s big thing was Fandangoing but not one gives a crap about it anymore. Geez, the guy is still on the roster and they’re burying him like this. At least go with Ryder or someone who’s completely irrelevant. They say Daniel Bryan isn’t here tonight. The Yes Movement and Daniel Bryan is a myth. They think he’s an A+ player but he isn’t. No matter how many times they chant yes, it’s not true. People say to Triple H that he has what he has is because he married well, but really it’s because he dominated so much in the ring. No matter how many flavor of the months they threw at him, he overcame them all.

They aired a video of Triple H destroying RVD, Scott Steiner. Booker T, Goldberg, and a bunch of other wrestlers people got behind. It was narrated by Stephanie McMahon and it was pretty damn awesome.

He says that all those people were great, hall of famers, but they tried to play the game, but he is the game. He’s decided to defeat Daniel Bryan and end the Yes Movement, and also prove he’s the best by becoming WWE champion again. This brings out Batista. He says that he likes the whole Yes Movement, but it seems that Triple H forgot to put him in because he never beat him. Triple H says he’s said that before then buries his shirt. Batista says he should be focused on the Daniel Bryan match since he may or may not be in the title match. He also notes that after last week, he’s learned Stephanie is the brawn and Triple H is the brains.

Randy Orton comes out and talks about his match later tonight. Says he’ll be honored to defend the championship against Triple H at Wrestlemania but he wants him to reconsider. Triple H says no amount of ass kissing will get him out of the match. He says he wants Orton to find the viper, because he doesn’t even think he can beat that guy. He exits the ring as the segment finally ends. The first part was good, would have been better without Batista and Orton.

The Usos and Los Matadores vs. Rybaxel and the Real Americans: Their match on Sunday is the pre-show match, a fatal four way for the WWE tag team championship. Usual solid tag fare at the start. The faces make a hot comeback, but get laid out upon commercial. Heels continue to work over one of the Usos until he finally makes a hot tag to his brother who goes wild until he gets caught with a boot by Swagger. Swagger goes for the vader bomb, but the Uso escapes and tags in a matador who gets caught by Swagger’s ankle lock. The matadors switch places while Swagger is distracted and rolls him up for the pinfall. Solid match.

Fandango and Damien Sandow vs. The Rhodes Brothers: This is awkward after that Triple H promo. I like how they claim they jumped on the Fandango bandwagon then left. Yeah, they left after a week because they shoved it down everyone’s throats immediately after and it became the lamest thing on Earth. Heels work on Cody forever until Goldust makes the comeback . Cody hits a crossbody on Fandango as Goldust hits the final cut on Sandow for the pinfall.

Recap of Kane and the New Age Outlaws laying out the Shield two weeks ago. This brings a Shield promo. They promised victory tonight and at Wrestlemania.

Bray Wyatt vs. R-Truth: Truth controlled early, but Wyatt quickly turned the tide. This went way longer than it needed to go. Destroyed him forever until finally hitting the Sister Abigail for the pinfall. Xavier Woods, who was at R-Truth’s side, got destroyed after for good measure. They pose, but suddenly another overalled, goat masked fellow arrives from the shadows. The trio look at this new person oddly, then he removes his mask as he’s none other than John Cena. He attacks, laying Rowan out with the AA and tries to put Wyatt in the AA but he escapes as Cena poses for the crowd. This was kind of clever.

Naomi vs. AJ. Lumberjills surround the ring: When AJ was outside, they would attack and throw her in. When Naomi was outside, however, they let her breathe. They did a bunch of stuff that ranged from ok to clumsy. Naomi tried to do the split legged moonsault, but AJ bailed to the outside. The divas tried to attack, but Tamina shielded her. I thought they split up already? The divas lay her out too as AJ climbs back to the ring, but she gets taken out with the rear view and Naomi scores the pinfall.

John Cena promo. Promised he’d be monster on Sunday if he has to protect his legacy. He’s gonna put his foot up Wyatt’s ass on Sunday. This was a good, fiery promo. He’s very capable of doing those, you know.

Jerry Lawler came to the ring to announce Roman Reigns won the poll tonight to determine who would face Kane. He got 80 percent of the vote, with Rollins getting 11% and Ambrose with 9%.

Roman Reigns vs. Kane: Kane controls early but Reigns powers out of a chokeslam. Superman punch, but suddenly the New Age Outlaws arrive…only to be taken out by Ambrose and Rollins. Reigns hits the superman punch, but the Shield run in and beat down Kane for the DQ. That was a really dumb finish, to be honest. Why can’t Reigns just pin Kane? They try to go for the triple powerbomb, but the Outlaws grab Kane and they bail.

Piper’s Pit with Roddy Piper. Says 29 years ago today he was in the main event of Wrestlemania. He lost, but didn’t get pinned, however. He was supposed to bring out the top favorite to win the Battle Royal. However, THE MIZ comes out. Says that he’s the favorite to win. Sheamus comes out and says he’ll win. Titus O’Neil comes out and says the same thing. Ziggler comes out and says he’ll lose. Just kidding. Piper says he knows where this is going and pokes Miz in the eyes, leading to everyone brawling. Mysterio comes out with his own music and takes out people, then Big Show follows, but destroys everyone, including taking Mysterio and throwing him into the sea of people on the outside. Piper raises Big Show’s hand as he’s indeed the favorite to win Sunday.

Batista vs. Randy Orton: They were about to grapple when The Authority arrives to do commentary. Batista and Orton brawl around the ring, and Orton clotheslines Batista over the guardrail. Orton lays out Batista with a steel chair and takes some shots. Orton cuts him off  Triple H urges the two to beat each other to a pulp. They beat each other up for a while more. Suddenly, Daniel Bryan emerges from the crowd and attacks Triple H. Orton and Batista try to interfere, but are both taken out with knee strikes. Daniel Bryan attacks Triple H with a kendo stick, then after taking out Batista and Orton hits a suicide dive taking him out. Bryan motions to the fans as Triple H is being held back by Stephanie, saying that this will be over at Wrestlemania.

This was a good go-home show. The Cena/Wyatt stuff was fun, and the Daniel Bryan/Triple H brawl at the end was great as well. I do feel odd that Bryan was the one who was standing tall at the end of the go home show…hmm…but I mean, he has to win at Wrestlemania, right? I guess we’ll know by this time next week. The rest of the show was fine with some ok matches, but really the only one that stood out was the Big E/del Rio match which was very fun. I expect Sunday’s card to be pretty solid, with some matches possibly being standouts but there’s lots of possibilities as to what can happen on the card. Have a great Wrestlemania Sunday!