WWF SummerSlam 95 (Off The Top Rope) 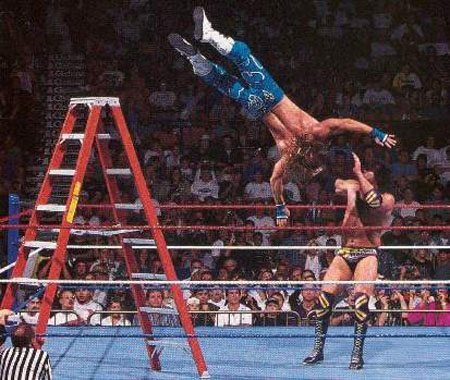 First of all, we have a pair of T-Shirts, including Random Acts of Meng!, now available at Pro Wrestling Tees. If you’d like to support the show, and wear a great looking tee, pick one up.

We kick the episode off, after a little schilling, with the HHH debate promised the week prior. We segue that into Raw talk and his attack on Daniel Bryan, as well as John Cena coming through when it matters in his feud with Bray Wyatt, Mike admitting he was wrong, and, as always, Cesaro adoration.

We then talk TNA ridiculousness, Christy Hemme mannequins, and the future of Bad Influence.

After a break, it’s time for SummerSlam 1995. We both get so bored by a match we get basic details confused, we talk about The Undertaker and Kama getting sixteen minutes, and debate if the Shawn Michaels-Razor Ramon ladder match is better than the first, before, clearly, the greatest main event of modern times, Diesel vs. King Mabel.

We name our MVPs and LVPs and reveal which show we’re talking about next week, Capital Combat: The Return of Robocop! We then close the show, per Rex’s request, with a little hip hop.

Music of the Mat #2: The Undertaker

Joevember To Remember #19: The Don Of Philadelphia