The 2014 New Japan Cup kicked off in a sold out Korakuen Hall, with all eight first round singles bouts and a six man match featuring long time rivals Hiroshi Tanahashi and Kazuchika Okada on opposing sides.

The hook to this year’s NJC  is that the winner is awarded title shot, and gets to choose which of the two top singles titles he gets to challenge for (either Tanahashi’s Intercontinental title, or Okada’s IWGP Heavyweight). The overwhelming favorite coming into the tournament was Katsuyori Shibata, who went nose to nose with Okada after Okada defeated his tag team partner, Hirooki Goto, at New Beginning Osaka last month. Okada vs Shibata would not only be a fresh match, but also a bout fans are salivating to see.

There is talk that the runner up will face the champion that the winner of the tournament declines. I’ve not been able to confirm this, although a Tanahashi promo strongly hinted at this direction. There were many people who felt this stipulation essentially eliminated Nakamura as a finalist, since he just lost two matches to Tanahashi, and it feels like it’s too soon to do Nakamura vs Okada.

1. New Japan Cup – Round 1: Yujiro Takahashi vs. Shelton Benjamin – Coin flip match coming in, with the returning Benjamin (who missed some time after a minor surgery on his arm) taking on Yujiro, who has been middling without much of a push. Shelton went for an ankle lock very early, and Yujiro scurried to the outside upon escaping. He ate a huge superkick after making his way back in, for an early near fall. Shelton kept control with good counters, and they went into a bodylock/chinlock rest hold. Transition was a fisherman’s buster out of the corner by Yujiro after a missed corner splash. Shelton reversed a rana attempt into a sit out powerbomb for another near fall, then hit the Paydirt out of nowhere for the win. Short but decent. **1/4

2. New Japan Cup – Round 1: Toru Yano vs. Minoru Suzuki – The story here was Suzuki being one step ahead of Yano’s tricks at every turn. And he should be, since they seem to face each other on every major show. The finish was Suzuki jumping out of the way of Yano’s reverse mule kick to the nuts, delivering a nut shot of his own, and using a clutch roll up for the pin. **1/2

3. New Japan Cup – Round 1: Katsuyori Shibata vs. Karl Anderson – Bullet Club had a 25% chance of winning the tournament with four entries, but Anderson was facing the heavy tournament favorite. Shibata went for the corner dropkick pretty early, and Anderson pulled off a great reversal.

Anderson took control, but missed a senton splash, allowing Shibata to set up another corner dropkick and this time hit it. Some good back and forth action from here, with a highlight being Shibata reversing a Gun Stun into a choke, which looked great. Shibata hit a series of kicks, with Anderson desperately protecting his skull. Anderson hit a Bernard Driver and got a really, really close 2.9 count that the fans bought as the finish. He also used a big sit out powerbomb as well. This was really coming together and could have been great with more time. Shibata won when Anderson tapped to an Octopus Hold. ***1/4

4. New Japan Cup – Round 1: Hirooki Goto vs. Doc Gallows – On our podcast, I picked Gallows to score  a big upset in his first New Japan singles bout. He had a lot to prove here, as his run has been a bit underwhelming since a good World Tag League debut tour. Well, so much for the upset, as Goto & Shibata swept their matches with Guns & Gallows, further setting up their eventual IWGP Tag title shot. Gallows looked okay, but this was not the breakout performance he needed. Goto won with his Goto Shiki Cradle. **1/2

5. Special 6 Man Tag Match: Hiroshi Tanahashi, Kota Ibushi & El Desperado vs. Kazuchika Okada, Jado & Gedo – The only question here, was whether Jado or Gedo would take the High Fly Flow. Jado did his Ric Flair routine early. Jado & Ibushi were in from the start for what felt like forever, until a double hot tag to Okada & Tanahashi. It was the usual magic with these two. The chemistry between these two men is just phenomenal, and unmatched in wrestling today (and maybe ever). They went through a mini-closing stretch of their singles matches, worked to a stalemate, and tagged in Gedo & Desperado. Things broke down and got crazy with bodies flying everywhere. Desperado finished off Gedo with a sit out powerbomb variation (there were a ton of these on this show), instead of his usual dangerous (as in, legit dangerous) looking finish. So the HFF didn’t finish it, but Gedo did take the fall. Fun match. ***

6. New Japan Cup – Round 1: Lance Archer vs. Prince Devitt – This match was wild. Devitt snuck in through the crowd and attacked Archer with a chair. He tossed him to the outside and continued the assault, including setting him up in a chair and hitting a running dropkick. Devitt ran towards Archer for another chairshot, but Archer punched the chair into Devitt’s head. Then came one of the best visuals you’ll ever see. Archer grabbed Devitt and flung him over the guard rail right into the commentary table, wiping out Yuji Nagata. This looked incredible. Devitt cleared the rail by about ten feet. Archer was going nuts, pounding the apron and screaming. Crowd was super into all of it. Back in the ring, they exchanged a bunch of cool big man/little man spots. Devitt went for a double stomp off the top, but Archer caught him by the throat. They went though some wild reversals before Archer eventually hit the chokeslam. Devitt escaped a Dark Days attempt, and later avoided a moonsault. He then hit his double stomp, followed by an amazing looking high angle Bloody Sunday that Archer took like a million bucks. This was better than their G1 match, which was also pretty good. Really enjoyed this. ***1/2

7. New Japan Cup – Round 1: Togi Makabe vs. Bad Luck Fale – This was a wild brawl, but couldn’t match the previous bout. Makabe hit a larait with his arm wrapped in his chain, but Fale kicked out. Makabe survived the thumb to the throat, but Fale hit the Bad Luck Fall for the win. I wasn’t into this. *3/4

8. New Japan Cup – Round 1: Tetsuya Naito vs. Tomohiro Ishii – Ishii had been pinning Naito left and right, so Naito figured to get a win back here. A real buzz for this at the start, as Korakuen always loves Ishii, plus now he’s being pushed. This was like a condensed version of their ***** match from Februray’s New Beginning. Ishii took the meat of it, sort of tipping off the expected finish. Every time Naito would charge up for some fighting spirit, Ishii would kill him with a lariat or big move. That was a nice touch. Finishing sequence had a ton of cool shit, including Ishii kicking out of a great dragon suplex & Naito reversing a brainbuster attempt into one of his own, until Naito won it with the Stardust Press. I can watch these guys wrestle a billion times and won’t ever get tired of it. Great stuff. ****1/4

9. New Japan Cup – Round 1: Shinsuke Nakamura vs. Davey Boy Smith Jr. – Some chain wrestling to start. Davey took control and worked Nak over on the outside. He tossed him back in, used a camel clutch, and made funny faces. Nak fought it off but was grounded by a side headlock as Davey kept wearing him down. I’m not a fan of long matwork that goes nowhere, but Davey’s stuff always holds my attention. Nak used his knee attacks to take control. Davey used a bunch of Billy Robinson spots like the double underhook suplex and one arm backbreaker, but couldn’t put him away. Crowd was behind Davey but weren’t buying the near falls enough to put this over the top. Nak won with a Boma Ye. Good, but a bit underwhelming. Never got to the next level. ***

This was a solid show from top to bottom, and I can recommend a purchase or watch. The semi-finals are 3/22 with the finals on 3/23.

Special thanks as always to @SenorLARIATO for the cool gifs! 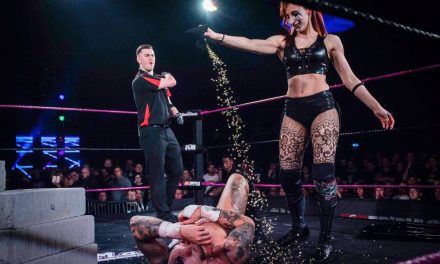