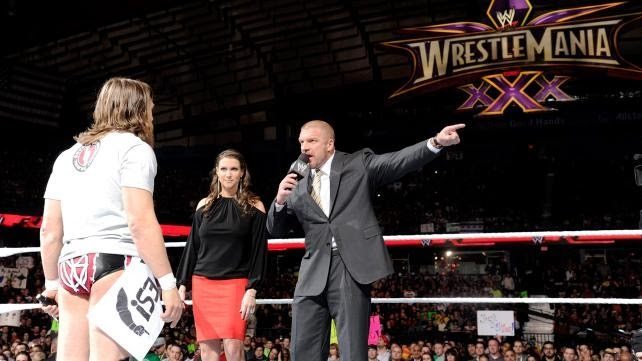 This will not be as verbose as other Raw reports have been, so I apologize in advance. For some reason, my DVR decided it didn’t want to record Raw, so now I have to rely on other ways to watch Raw and to get this report to you, the Voices of Wrestling public. What other ways am I referring to? None of your business, nosy.

Raw opens with CM PUNK’S MUSIC PLAYING! Since we are live in Chicago, the people seemed to like this. After Punk doesn’t appear, however, people get that WWE is just messing with them, and instead Paul Heyman comes out to address the Chicago crowd. Paul Heyman said that there was a Heyman guy that nobody in WWE wanted, but somehow made it to the top anyway. The Heyman guy in question challenged The Undertaker to a match at WrestleMania and failed. Heyman said that since WrestleMania, that Heyman guy has been lost and thats why he’s not here tonight. He blames his and CM Punk’s relationship troubles squarely on The Undertaker and promises that Brock will end the streak at WrestleMania because he needs it.

Brock Lesnar’s music hits as he arrives amidst loud CM Punk chants. This is going to become a theme. He says that Punk, HHH and HBK were all failures for not being able to break the streak and that he’ll do it at WrestleMania.

This brought out MARK HENRY. Yes. Mark Henry and Brock went at it, and Brock promptly destroyed Henry like nobody’s business, laying him out with an F5 into the table. Later, geek.

The Usos vs. The New Age Outlaws: Remember back when midcard feuds had, like, interviews and the midcard guys were able to hype their own matches? Now everyone just wrestles a bunch of times for no real reason. Well, the tag titles are on the line here again because I don’t know. Jey and Dogg start things off, some back and forth then Gunn is tagged in, who works over Jey.

The Outlaws work over Jey until Jey finally makes a hot tag and he goes wild including hitting a corkscrew senton on Gunn. Dogg interferes and Billy is able to get some offense in, including a tilt-a-whirl slam, but Jimmy kicks out. Gunn with a famouser but he misses. Jey tags, super kicks Billy and hits a frog splash for the victory. Hence, Jimmy and Jey Uso are finally the tag team champions! Well deserved and an alright match.

Need for Speed plug. A bunch of random divas stood around awkwardly while promoting it. Do they not realize that this is not how people talk or stand together in real life?

Cesaro vs. Big E: A match I totally need to see again. How many guys are on the WWE roster? Why do I need to see a barrage of rematches every week? Swagger ran in and hit the Vader bomb on Big E for the DQ. These DQs are amazingly stupid. Cesaro and Swagger argue after the match, but Big E recovers and lays Cesaro out with the Big Ending.

The Shield immediately come to the ring as their rematch against the Wyatt Family is next.

The Shield vs. The Wyatts: Action starts quick as Reigns hits Wyatt with a samoan drop while Rollin and Ambrose dive to the outside. It turns into a frenzy but eventually it leads to the Wyatts working over Ambrose for most of the match. Ambrose gets his shots in as well, but when the time finally comes to make a tag, Rollins exits the apron. Reigns asks what he’s doing. Rollins says he can no longer be the glue that keeps the team together and for him and Ambrose to figure things out on their own. Reigns hits a Superman punch on Rowan and Wyatt. Rowan grabs him and tries a powerbomb but Ambrose takes him out. Reigns takes out Rowan to the floor while Ambrose and Wyatt go at it. Reigns, meanwhile, spears Rowan over the announce table. Harper catches Ambrose with a boot, then follows that with a suicide dive that takes out Reigns. Wyatt posts Ambrose then hits the Sister Abigail for the pinfall. Another great match between these six.

The Wyatts celebrate as Rollins looks on. Tension’s simmering, ya’ll!

Batista interview. Basically just called Daniel Bryan a geek and he’ll get rid of him tonight.

Emma & Santino vs. Fandango & Summer Rae: Emma won with the Emma lock. I don’t think you need a detailed explanation of this match. Emma is getting over though, slowly but surely. That’s pretty cool.

Sheamus vs. Christian: For the ten thousandth time… I feel like I’ve seen it ten thousand times anyway. It’s not that they have bad matches, as both Christian and Sheamus are great, it’s just that I’VE SEEN IT. As with the rest of these matches tonight. Go in a new direction, please. Some back and forth stuff early. Pretty solid match. Christian with the heat on Sheamus since he’s officially a heel, or whatever Vince McMahon wants to call guys who get booed this month.  Sheamus does his clubs off the apron but only gets a nearfall. Christian shoves him to the corner, then counters with a reverse ddt. Going for a frog splash, and connects for a nearfall. Christian goes for his slap off the apron, but Sheamus grabs him and hits the white noise. Christian cuts him off and starts his offense on the apron, but Sheamus hits him flush with the brogue kick and scores the pinfall.

Sheamus was doing an interview after the match when Christian jumps him and lays him out. So hyped for future matches after seeing Christian lose clean in the middle.

The Bella Twins vs. Alicia Fox & Aksana: Nikki hit Alicia with her finisher to pin her. I put as much effort to write that as WWE does with this division so please don’t be cross with me.

Daniel Bryan made his way to the ring. He said that he wasn’t leaving until either Batista arrives for their match or Triple H comes down to answer his challenge. Triple H and Stephanie arrive and immediately are drowned out by CM Punk chants. Kind of amazing. Stephanie, of course, opted to speak first and got tremendous heat. Well, she does play her role really well. Almost too well. Daniel Bryan opted to speak to Triple H, ignoring Stephanie. Triple H said no, he doesn’t waste time with B level players like Daniel Bryan for WrestleMania, but he’ll be sure to find a place on the card for him.

Stephanie dresses down Daniel Bryan by saying that the ring, his merch, the yes movement, everything is because of what the McMahons have done for him. Without them, he would be nothing. Bryan responded by saying that maybe she should put on the tights and fight him since Triple H is too busy hiding behind her skirt. Triple H seemed bemused by this. He said that Stephanie could probably beat him too, but he just need to realize that this was his ring, these were his people whether they liked it or not and the WrestleMania match isn’t happening because he doesn’t measure up.

Hunter tells Bryan to get out of his ring. Bryan refuses. Triple H asks again, which leads Bryan to tell him to do something about it. Stephanie orders Kane out, but Bryan immediately lays him out with a tope. Stephanie screeches for security as they come out and seperate Bryan from the Authority. This was a white hot segment that is slowly making me more and more interested in this match than anything else. That sure is a hell of a improvement from last week.

Dolph Ziggler vs. Alberto del Rio: But forget these two, the real star is Aaron Paul who is on commentary. He hyped the Need for Speed movie that looks terrible. del Rio hits a superkick and covers for a nearfall. Paul gets to the apron to distract del Rio and Ziggler hits a zig zag from behind for the victory.

Paul Bearer is going into the WWE Hall of Fame. That’s great! A tremendous manager and character on WWE programing.

Big E vs. Jack Swagger: Why is this a match? It doesn’t matter because Cesaro runs in immediately and destroys Big E for the DQ. That’s excellent, great way to make the Intercontinental champion feel important. Swagger and Cesaro start arguing again and it leads to Cesaro attacking him. Coulter grabs a microphone and says to stop, be a real American and stop the assault. After teasing a bit, Cesaro lets him go. Coulter tells him to pick him up and hug him, and after more teasing they did. This was fine, and I like where they’re going here with The Real Americans, but wow did this angle make Big E look like an all time geek of geeks.

John Cena comes out to address the Wyatts. Says the same thing he’s been saying for a month now about how the new people need to go through him. I wonder if anyone realizes he’s been saying these same lines for a month now. Bray appeared on the tron and spoke his usual tone. Says that he’ll take everything away from Cena and leave him alone.

Randy Orton and Batista crossed paths backstage. He wished Batista luck tonight in his match. This is such a weird feud. And you can tell they have no idea what they’re doing with this match considering this was the only time they interacted tonight, plus Batista is pretty much a full heel now after Smackdown.

Hulk Hogan’s gonna have an announcement next week on Raw brother jack dude. 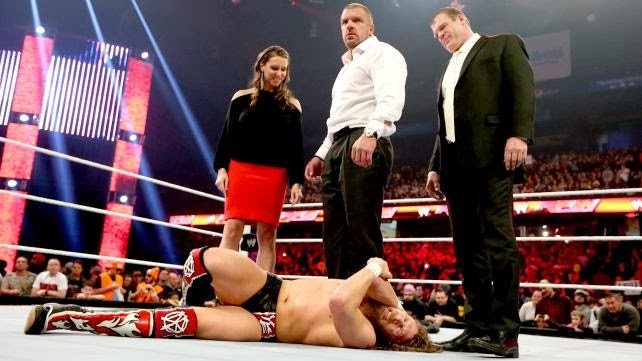 Daniel Bryan vs. Batista: Given the time they had left (this started around 8 PST) this was pretty short, with Daniel Bryan and Batista going back and forth with their usual fare. Randy Orton was at ringside, and Bryan was thrown into him by Batista during the match, I guess since Batista and Orton really are going at it for the title. Bryan hits a suicide dive on the outside into Batista. The Authority came out. Orton came in and attacked Bryan for the DQ. He went for an RKO on Batista, but Batista shoved away Orton which led to Bryan taking him out with a knee strike.Bryan did a dive on the outside, taking out HHH and Kane. He enters the ring, but gets taken out by Batista. Triple H recovers and enters the ring. He grabs Bryan by the hair and tells him he’s tired of this fantasy crap…but Bryan immediately waffles him with a kick to the head. The numbers game plays in, however, and Batista lays him out with the Batista bomb. Triple H recovers and gives Bryan a pedigree. He, Kane, and Stephanie stand tall over him as Raw goes off the air.

This was fine. The crowd was interesting and added to the show, that’s for sure. The hottest place for the WWE right now is in Chicago; I hope more shows are there this year. There were some solid matches, even if i’ve seen them 10,000 times already. The Daniel Bryan/HHH storyline was the highlight of the show. HHH and Stephanie play their roles well, maybe too well. The problem I’ve always had with this angle is that it’s hitting too close to home most of the time…I’m sick of authority figures and my main hope leading to this match is that they’re at least phased out after this match. I hope that this match leads to the most logical conclusion, that in the end Daniel Bryan beats Triple H. But WWE’s done so many shitty finishes in the last six months I’m pretty much just trained to think of the worst at this point. 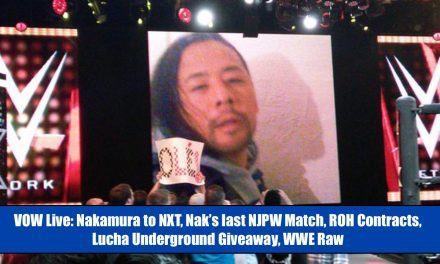